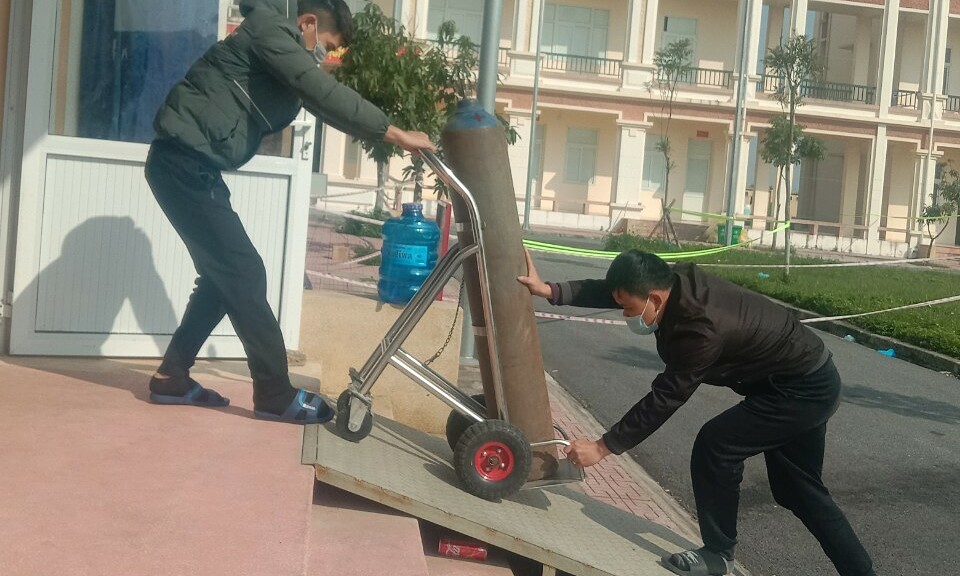 Nam DinhAt 8 am, two F0 Tran Duc Trung and Nguyen Van Truong started their daily work, loaded oxygen tanks one by one into the car and pushed them into the emergency room.

“Every day we take out 20 old oxygen cylinders, move 20 new ones in to replace them. A few days ago, there were 3-4 F0s working together, but now it’s just me and Truong,” Trung, 29 years old, who is managing Covid-19 treatment at the isolation area in the army barracks in Nghia An commune, Nam Truc district, said. He added, the total volume of oxygen tanks a day is more than two tons, every time the calf sits down to breathe.

On February 19, Trung and his 66-year-old father tested positive for Covid-19. His father had high blood pressure, had to go to the emergency room in the medical isolation ward, he asked to come along. The treatment room he was in had 20 seriously ill patients, most of which required mechanical ventilation.

The room was crowded but there were only two medical staff and one nurse. Trung asked for volunteer support, because his symptoms were mild. Initially, he took on the task of monitoring the patient’s SpO2 index. After that, he invited a few young, healthy F0s to transport oxygen tanks, so far it has been 7 days.

Witnessing that the medical staff took advantage of the lunch break to move each oxygen tank into the ward, then other F0s came out to support, Truong asked to do the same. “Seeing everyone doing it, I also do it, but no one forces me. That’s how the strong people support the weak and overcome difficulties together,” Truong laughed and said that the oxygen tank transfer was mostly done during the day, but there were problems. when having to move at night because of the large number of people needing breathing assistance, the tank must be changed continuously.

The 24-year-old said that the whole isolation area has about a dozen medical staff supporting more than 200 patients and their relatives. Manpower is thin, they are forced to split to support F0. “Many doctors are also F0 without a break, still working day and night to take care of patients,” Trung said. Many times, he shed tears when he saw the medical staff collapsed on the examination table, leaning against the wall to take a nap because of exhaustion.

“We are overloaded, so when we see a patient who is healthy, we have enough strength to ask for help. Fortunately, there are F0s like Mr. Trung, Truong and many others,” said a female medical worker in a remote area. ly, said.

Mr. Khuong Thanh Vinh, deputy director of Nam Dinh Department of Health, said that many medical staff and staff were exhausted. Many doctors and nurses became F0 but still asked to stay in the hospital and work in isolation. “But fortunately everything is still under control,” Vinh said.

The situation of F0 doctor treating F0 also occurs in many places in the context of the increase in the number of infections across the country. Like the case of pediatrician Nguyen Manh Cuong, who is working at a hospital in Hanoi. Doctor Cuong got a positive result on February 17 after a long period of direct treatment for F0s in the hospital.

“As F0, I can comfortably focus on my expertise, treating patients with Covid-19 instead of fearing infection,” said Dr. Cuong.

He said that because he had had enough vaccines, the symptoms only included a runny nose, shortness of breath, and fatigue, but he still tried to maintain the work schedule. In addition to directly treating patients in the emergency room and pediatric patients at work, Dr. Cuong still provides remote consultation for two F0 groups who self-treat at home with more than 220,000 members.

After five days of treatment, Trung and his father were transferred to a regular isolation room when their health indicators and symptoms stabilized.

“What I’m most worried about is that when I leave the hospital, I won’t be able to support the medical staff here. I just hope there will be more healthy F0s to support everyone through the difficult period,” Trung said. White.