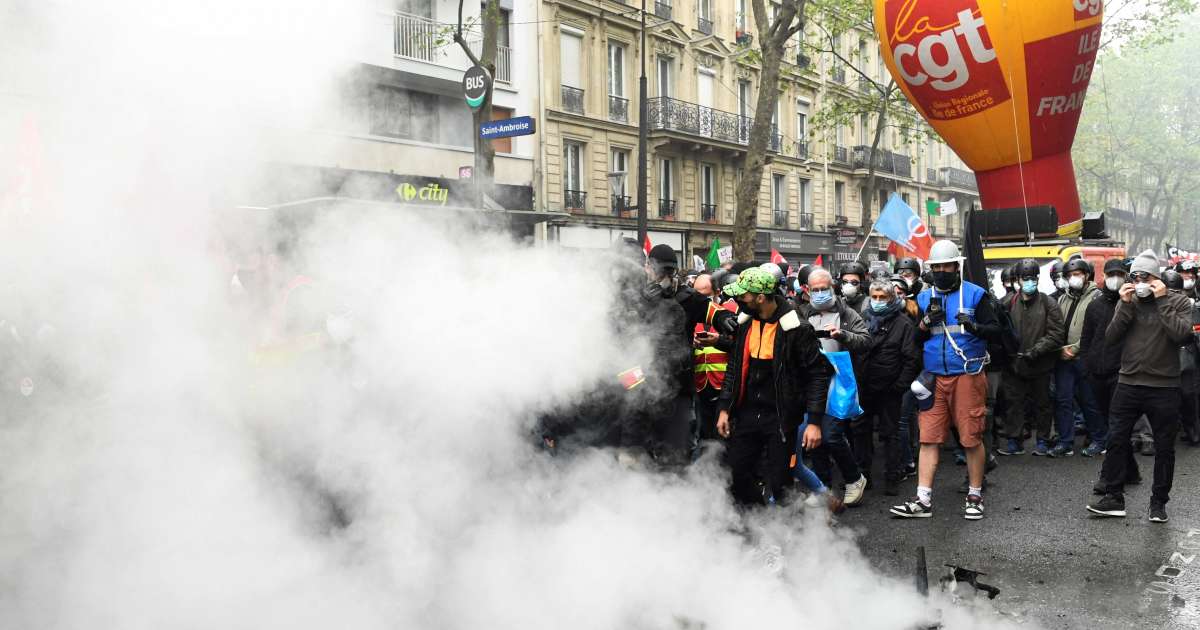 “Unworthy”, “Unacceptable” : the violence that punctuated the Parisian demonstration of the 1er-May were strongly condemned on Sunday in the trade union and political world, in particular the attacks against CGT activists during the dispersal and on which an investigation is open.

When the Parisian demonstration on the Place de la Nation arrived around 6 p.m., CGT activists were victims of a “Extreme violence” committed by “A large group of individuals, some of whom claim to be ‘yellow vests'”, according to the union.

The Montreuil power plant lamented Saturday evening “21 injured including four serious”. The four people who had been hospitalized – one of whom had “Lost consciousness for a few minutes” – have since been released from the hospital, we learned from the CGT on Sunday.

But some will need ” monitoring “ because the attack was ” very severe “, asserted on BFMTV Benjamin Amar (CGT), present during the attack on a union van. “In twenty years of unionism, I have never known a situation like this”, he stressed, judging ” complicated “ to know who was at the origin of the violence, but evoking insults “Typically” of the far right.

The secretary general of the CGT, Philippe Martinez, who denounced for a moment “Scandalous”, questioned “Securing the event since the trucks were prevented from leaving the Place de la Nation”, Saturday night on LCI. On Sunday on BFMTV, he claimed that the militants had fallen into ” a trap “, not excluding the filing of complaints.

May 1 protesters back in the streets, tensions in Paris

In a statement, the Prefecture of Police explained on Sunday that an exit route had been “Concerted” upstream for union vehicles from the Parisian square. Three are committed “On the wrong exit” and “Were the target of numerous throws of projectiles by a hostile crowd” in “At the same time as members of the CGT security service”, indicates the prefecture. She added that police officers had been “Also violently attacked by the demonstrators”, one of them injured, before the gendarmes intervened and used tear gas, allowing “Relieve tension”.

Asked by AFP, the Paris prosecutor said that an investigation had been opened into acts committed “Against militants and a vehicle of the CGT”, for “voluntary violence” and “degradation”, entrusted to the Territorial Security.

The violence targeting the CGT has aroused strong condemnations in the union ranks: the CFDT has denounced them in particular “With the greatest firmness”, while FO, who demonstrated on Saturday with the CGT, FSU and Solidaires, spoke of acts “Intolerable”.

Within the government, the Minister for Citizenship, Marlène Schiappa, addressed on Sunday “A word of support” to the militants taken to task, judging “Obviously absolutely unacceptable and intolerable to attack people who demonstrate”, on Franceinfo.

“It’s the first time we’ve seen this”, also commented the Minister of Seals, Eric Dupond-Moretti on France-Inter, while on Saturday evening, the Minister of Labor, Elisabeth Borne, had condemned “Very firmly” the disturbances that have enamelled certain parades.

Several left-wing politicians have also condemned the violence, like Jean-Luc Mélenchon (LFI) who said “United” activists “Attacked by a masked commando”. “The violence deployed against the large union is a sign of the seriousness of the event. Where is France going? “, he tweeted.

On the right, Xavier Bertrand felt that he was “Time to put out of harm’s way the” Blacks Blocs “” which are “Killing the right to strike in our country”, while the boss of senators LR Bruno Retailleau castigated in a press release a government “Unable to stop violence”.

A second May 1st under Covid-19, the unions back in the street

In total, the processions gathered Saturday between 106,650 demonstrators (Interior) and more than 170,000 (CGT), including between 17,000 and 25,000 in Paris. Fifty-six people were arrested, including 46 in Paris, and six police officers were injured, including three in the capital. According to the prosecution, 54 police custody were decided on the sidelines of the demonstrations in the capital.