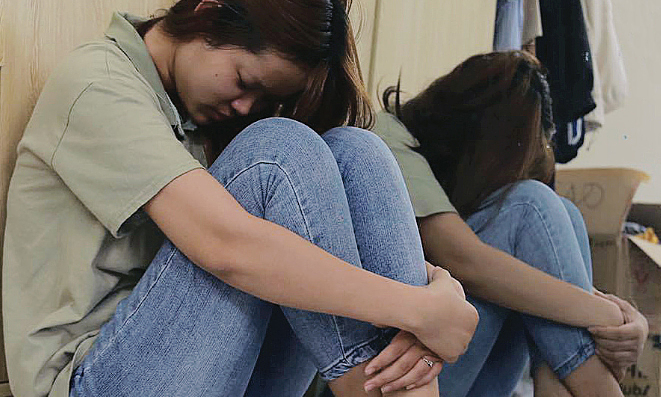 Hanoi“Help me,” the woman’s imploring voice called to the hotline 1900 96 96 80 of the Peace House, amid the city’s lockdown under Directive 16.

It was around 9 a.m. on August 13, Le Thi Nguyet and her two children were hiding in an abandoned house in a suburban district of Hanoi and found the switchboard’s number. Near 2pm, the parents and children arrived at the Peaceful House, belonging to the Center for Women and Development, Vietnam Women’s Union. Nguyet’s whole body covered with bruises caused by sticks, punches and kicks, panicking. Two girls aged 4 and 8 were dirty and hungry.

“My parents came to ask for shelter when they couldn’t bring anything. The identity papers were torn by the husband,” said Ms. Duong Thi Ngoc Linh, director of the center.

The woman in her mid-forties said she had been violently abused by her husband for more than 10 years. Due to Covid-19, being restricted from going out, the beatings became increasingly dense.

Nguyet is just one of thousands of women who came to Peaceful Homes across Vietnam during the two years of Covid-19. In the first six months of 2021, the Call Center received more than 1,300 calls, an increase of 140% compared to 2020, of which more than 1,000 women reported violence. In Hanoi, in the past half year, Peace House has taken care of 74 people, an increase of 120% over the same period in 2020. During the last 4 epidemic, the number of women in the southern provinces calling for help accounted for 30% of the total number of people. nationwide calls.

When she first arrived at the Peace House in Can Tho in early May, Hoang Thi May panicked, lost sleep, often crouched in the corner, sometimes shivering, in her mind the image of “her husband suddenly used a stick” beat, use a knife”.

Clouds are only in their twenties, coming from a central province. She got married through matchmaking after three months of finding out. The first two years of marriage were normal because her husband went to work abroad. At the end of 2020, he returned when his business failed, such as turning into a different person, drinking, playing cards, managing money, tightening his wife’s talk with his grandmother’s family. “Once, he beat me and took a video and sent it to my mother. He threatened to kill me if I dared to go back to my grandmother or say two words divorce,” May said.

One day at the end of April, her husband came home from drinking for no reason, cursed at her, then beat her with a wooden stick for half an hour. After the battle, she planned to escape to her brother’s house in Binh Duong. Fearing that her husband would come and cause trouble, she fled to a shelter.

Covid-19 does not discriminate. Unlike previous global public health and financial crises, Covid-19 is particularly detrimental to women and exposes gender biases in the economy and social structure. The pandemic has forced governments to introduce unprecedented, extreme social distancing measures, increasing household duties and caregiving responsibilities that are already placing more burdens on women than men. . Loss of jobs and incomes, along with increased anxiety related to livelihoods and fears about the virus, have also increased stress on households.

“Within 15 months, Covid-19 can reverse the fragile gains made on gender equality, worldwide and in Vietnam,” United Nations Women’s Gender Equality Overview Report National in Vietnam announced on October 27, emphasized.

Usually, home is the safest and most peaceful place. But for victims of violence, when the door is closed, the house is like a street without light, danger lurks but it is difficult to speak up. The blockade makes it harder to escape abuse. Not only that, it also changes the way the perpetrator manipulates the victim.

“While eating rice, he hit his face with a bowl,” Ms. Than, a victim of violence in Phuc Tho, a suburban district of Hanoi, told ISDS research.

The 40-year-old woman is a garment worker, her husband is an electrician. The outbreak caused both of them to lose their jobs and have no income. Than has to support her 3 children and her husband from the vegetable garden. In a situation of poverty, her youngest son fell ill again, causing her to borrow a large amount of money for treatment.

But the husband gambled, drank, often came home to force his wife to give money, beat and scolded the children. In just a few months of the 2020 epidemic, she was beaten 5 times by her husband, to the point of being hospitalized.

At the peak, the husband forced her to borrow money and could not afford to set fire to his wife and children. “At that time around 10 o’clock at night, I got up to open the locked door. He spread clothes and blankets around the house and poured gasoline on it,” Ms. Than said.

According to Ms. Duong Thi Ngoc Linh, when women suffer from domestic violence, the risk of insecurity is high, it is necessary to leave the house, go to a shelter to ensure the life of themselves and their children before solving the problem. according to the legal process. “It is important and necessary for each victim to speak up, stand up and seek support,” she said.

Currently, the Vietnam Women’s Union has shelters in Hanoi and Can Tho. Besides, there are also many organizations/enterprises supporting domestic violence victims such as Hopebox, Center for Research and Scientific Application on Gender – Family – Women and Adolescents CSAGA, Sunshine House , Hagar International in Vietnam to Mother and Child Associations and other shelters and support for victims of violence in all provinces.

Recently, CSAGA launched Messenger bot Love and Freedom, as a tool to support victims of Online Gender Violence. Victims of violence can go to the Love and Freedom Fanpage for immediate support.

* Character names have been changed