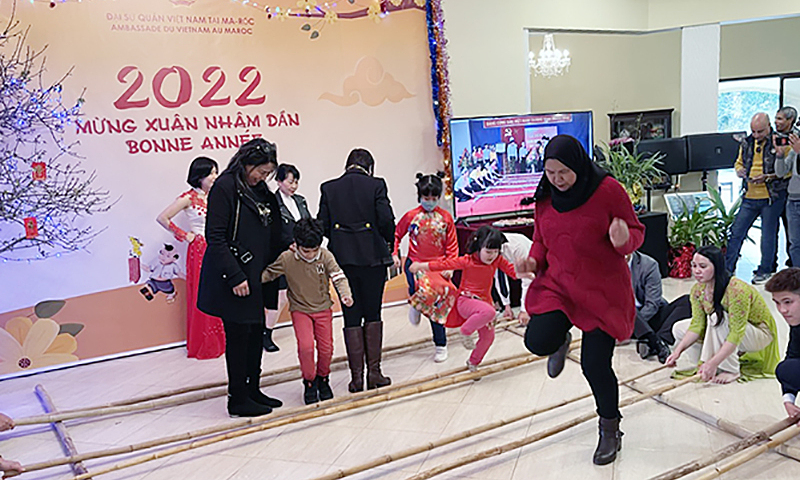 “My legs are not stable. After half a life away from the country, I can smell banh chung and sticky rice again on the traditional New Year’s day. Any child far from home will not choke,” said Mrs. May, 80 years old, president of the Association of People. Vietnamese in Morocco recall the first Tet organized by the Vietnamese embassy, ​​17 years ago.

In 1972, Mrs. May and her Moroccan husband left Vietnam. Her husband was taken into the army by the French and sent to Dien Bien Phu in 1953. At that time, the resistance war against the French for independence also broke out in Morocco. When coming to Vietnam, young men 18-20 years old like her husband found it pointless to take up arms for an invading army against a nation fighting for independence. They ran away together and joined the Viet Minh forces. After the Dien Bien Phu Victory, responding to the call of President Ho Chi Minh, more than 300 North African soldiers and 100 Vietnamese workers went to Ba Vi mountains to reclaim and open farms. Mrs. May and her husband should be charming here.

May and her husband and 70 Vietnamese-Morocco families at that time each lived in one place, no one lived near anyone. Most of the people in this country are Muslim. They celebrate the new year in May or June according to the Arabic calendar. “There is no pork here, no sticky rice, nothing for Vietnamese people far from home like me to celebrate Tet,” Mrs. May recalled.

In those years, Morocco did not have a Vietnamese embassy. For each letter sent home, it takes 6 to 8 months to receive a reply. Every time she misses home, Mrs. May turns to photos of her mother and relatives, her eyes aching to the East, wishing one day to return.

Without a lunar calendar, nor living near any Vietnamese, Tet comes to a woman originally from Hanoi when the peach trees in the garden are in full bloom. During the whole peach season, at the end of each working day, she would bring a chair to the garden to sit and watch, only to enter the house at night. After that, when she was busy with work, Mrs. May saw the branches, brought them into the house to plug them, and did not forget to burn the roots to keep them fresh for a long time, an old habit when she was still in her hometown.

In the early 2000s, the city of Meknes, where Mrs. May lived, began to have Chinese supermarkets. Here you can buy sticky rice, green beans and some ingredients suitable for Vietnamese dishes. Since then, every time the peach blossom bloomed, she would cut banana leaves and pack banh chung, using young beef as a filling instead of pork. She, her husband and children gathered around the tray of rice to welcome the Vietnamese New Year.

In 2005, the Embassy of Vietnam was opened for the first time in the capital Rabat, people far from home like Mrs. May were invited to celebrate Tet. Thirty-three years in her husband’s hometown, she met Moroccan-Vietnamese families that had not been reunited for many years. Together they watched peaches bloom in the embassy, ​​enjoyed ethnic dishes such as banh chung, fried spring rolls, sticky rice with gac… true Vietnamese flavor.

“The ethnicity, the homeland has been felt for nearly 40 years. Children who have been away from home for a long time like us have a lump in their throats,” she said.

Nearly twenty years of celebrating Tet at the Embassy, ​​not only Mrs. May but also many overseas Vietnamese in Morocco have also been awakened to the national spirit. Among them is Mr. Zong Allam Mahamuod, a Vietnamese-Morocco hybrid.

Tet with this man is the thrill of a lucky money envelope, trying to taste a piece of jam and candy, and then eagerly watching Chung cake and baking potatoes. “Going to Morocco doesn’t have that atmosphere anymore, so when I was invited by the embassy to attend Tet 17 years ago, so many childhood memories came rushing back,” said Mr. Mahamuod, 62.

Zong Allam Mahamuod, whose Vietnamese name is Dung, has a Moroccan father and Vietnamese mother. At the age of 13, he and his parents returned home under a government summons. They live in a village called Al-Shinwa in the province of Kenitra, where seven families of Vietnamese wives are married to Moroccan husbands. Living in the place with the largest Vietnamese community in Morocco, even though he has been away from the country for 50 years, Dung’s ability to hear and speak his mother tongue is “still correct”.

Mrs. Nguyen Thi Nhung, Mr. Dung’s mother, 87 years old, originally from Hai Phong, is a very good cook. She taught her children to cook Vietnamese dishes from a young age. At the age of 17, Mr. Dung worked as a kitchen assistant and then became the head chef of a famous 5-star hotel chain in the capital, Rabat. In addition to him, four other siblings in the family also follow the kitchen profession, influenced by their mother’s passion for cooking.

More than twenty years ago, Mr. Dung’s family knew that Tet would come in spring when the peach trees in the garden bloomed. His mother, a Vietnamese woman at that time, cut the branches and brought them into the house to plug, then chose the weekend to call her children and grandchildren living everywhere to treat the Vietnamese New Year party.

In addition to banh chung, which is an indispensable dish, Ms. Nhung also makes braised pork from beef, fried spring rolls, crab soup, and once even cooked pho. “Vietnamese food through mother’s hands is not as delicious as anywhere else,” said the eldest son.

For many years now, Ms. Nhung and her husband moved to France to live. Since their parents left, instead of gathering at home, Mr. Dung’s brothers often drove hundreds of kilometers to Rabat to attend the New Year at the embassy.

As a chef, this man often shows off his talent in cooking pure Vietnamese dishes to treat relatives who come to celebrate Tet like me. After the party, everyone also watched the circus, lion dance, stall dance… “Every year I go early, I don’t come home at 11 am”, Mr. Dung said.

In 2021, the epidemic situation is tense, shops selling Vietnamese goods in Morocco will close. In July, when she returned from France to visit her children, Nhung’s suitcase, in addition to a few clothes, was filled with sticky rice, green beans… The day Vietnam and Morocco established 60-year diplomatic relations (July 2021). ), the 87-year-old woman got up early, cooked 3-4 large plates of green bean sticky rice with hundreds of spring rolls and brought it to the embassy for everyone to enjoy. She also saved ingredients, told her children to pack banh chung and celebrate Tet together.

In the new year of 2022, the Vietnamese community in this North African country has a new joy when “Vietnam Gate in Morocco”, a project imbued with national identity is being built in Vietnam Village, so that the next generation I always go back to my roots. As planned, the gate will be inaugurated in the summer of 2022.

Although they are two different generations, both Mrs. Hong May and Mr. Dung are fond of literature and poetry, especially self-composed songs about their homeland and country. On New Year’s Day at the embassy on January 21, they recited a poem written by Mrs. Hong May not long ago.

“No matter where you live
May Mother Earth be strong, rich, and virgin
Warm wishes sincerely
Shining bright like a bright dawn”

Both of them hum along, sometimes their voices are deviated by the bitterness of the bridge of the nose…