Vietnamese sports have many times recognized the important role of female athletes, excelling in both the number of participants and also bringing in more achievements than their male counterparts at international sports events. , of which the latest is at the 31st SEA Games

“Entering” is many decades slower than men’s football, but the women’s national team has so far been a special phenomenon in Vietnamese sports. Men’s football had to wait 60 years to have the second title at the SEA Games and recently successfully defended the No. 1 position in Southeast Asia.

Meanwhile, the female colleagues managed to bring home the 7th championship since re-integration more than 20 years ago. Catching up and surpassing rival Thailand to hold the record for the number of times dominating the Southeast Asian turf is not something that every subject can do.

Women’s football brought an “unprecedented” achievement, and athletics also had the third consecutive time to break the unique position of the Thai people for many decades. Out of a total of 22 gold medals that the “queen” sport brought to Vietnamese sports, the girls’ contribution amounted to 14 and accompanied by 2 new congress records.

At the second SEA Games in a row, Nguyen Thi Oanh won a “golden” hat-trick in the distances of 1,500 m, 5,000 m and 3,000 m of women’s hurdles, and also consecutively succeeded in breaking records. of the congress in the women’s 3,000m obstacle course. This feat helped her petite player from Bac Giang province to win the title of “Best Female Athlete of the 31st SEA Games” and was also recommended by the President to award the Second-class Labor Medal.

Also from the dark to the bright light at the 31st SEA Games is the story of Nguyen Thi Huong, a female player from the midland region of Vinh Phuc who became famous on the track of… canoeing/kayak. This 21-year-old rower is one of the most successful athletes of the 31st SEA Games with 3 individual gold medals and 2 team gold medals, worthy of being recommended for awarding the Second-class Labor Medal. 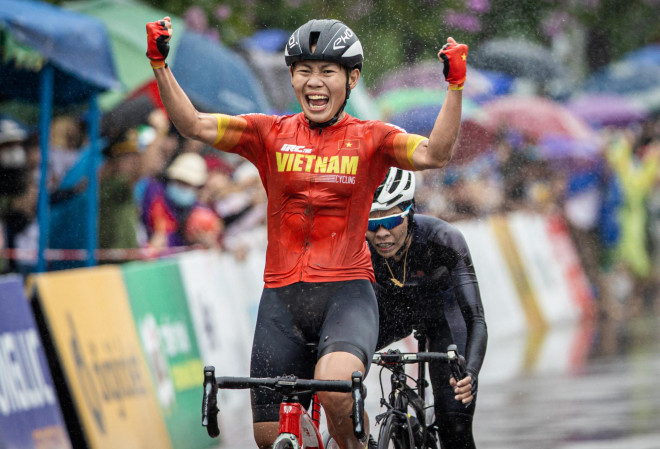 Countless touching pictures and stories about the competition of female sports athletes, who had the honor of singing the national anthem 109 times, proudly watching the Vietnamese flag fluttering in the sky of their homeland. The person who won the first gold medal for the host sports team, female kurash boxer To Thi Trang, almost flew back to the hospital to show off her achievements to her father who was in the midst of a life-threatening situation.

Female bodybuilder Dinh Kim Loan after being crowned champions at world tournaments, Asia was almost in tears with her first victory in the regional arena, where the gold medal was small and precious. She made an important contribution to Vietnamese sports to break the record of more than 60 years of history of the SEA Games.

Athlete Pham Thi Hong Le, after a unique “oxygen tank” performance at the 2019 SEA Games marathon, now becomes the 10,000 m champion with the determination to change the color of the medal; “steel warrior” Nguyen Linh Na won the gold medal in the 7 pentathlon for Vietnamese athletics after 19 years; chess player Le Thi Kim Loan became the first chess champion in the history of the SEA Games despite never participating in any international tournaments; Pham Le Thao Nguyen and Nguyen Ngoc Truong Son had a “double sword match” to become the first international grandmaster couple to win the championship of standard chess at a major tournament.

Not only did the female athletes persevere in training, and make endless efforts to overcome all difficulties, a lot of sweat and tears of the female athletes fell, even settling down the physical pain caused by training injuries and pain. spirit because of the loss of a loved one in the family during the convention days.

Medals may only partially ease that pain, but above all, every female athlete deserves to be mentioned about a glorious period in the country’s sports. The Vietnamese tennis team added a strong force to attend the 31st SEA Games, but could not complete the goal of winning at least 2 gold medals.