Tu Chinh is the “trump card” in the short distance 100m and 200m women’s events of Vietnam athletics. The biggest counterpart of “Queen of Vietnamese speed” in regional tournaments is the naturalized American athlete of the Philippines Kristina Knott. At the 30th SEA Games, Knott overwhelmed Tu Chinh at 200 m, but Tu Chinh overcame this opponent to win the 100 m content medal.

Since that time, the tacit achievement competition between these two girls has always attracted the attention of professionals as well as fans.

At the end of August 2020, Knott surprised him with a record of 11 seconds 27 at a distance of 100 meters at the Drake Blue Oval Showcase in the United States. This index surpassed the 11 second 28th SEA Games record, which existed for 33 years, held by Lydia De Vega (Philippines).

Obviously training in the US and attending many quality tournaments has helped Knott to progress rapidly. Meanwhile, despite being influenced by Covid-19, Tu Chinh also brought positive signals at the recent national championship in early November. She achieved 11 seconds 43, surpassing the previous statistic of winning the SEA Games 30 gold of 11 seconds 54. It is not easy for Tu Chinh to protect his female 100m gold medal. Photo: Ngoc Tu

Certainly the upcoming encounters, especially at the 31st SEA Games of 2021 between Tu Chinh and Knott, will be extremely fierce. Tu Chinh is expected to shine to help his country’s athletics defend its No. 1 position in Southeast Asia.

Vietnamese athletics are benefiting from the internal competition of two “Queen” at 400 meters and 400 meters over the fence, Quach Thi Lan and Nguyen Thi Huyen. Quach Thi Lan has twice won the Asian individual gold medal in an unexpected way. In the 2017 Asian Athletics Championship, she was given a 400-meter female gold medal after the first-place winner Nirmala Sheoran (52 seconds 01) was positive for banned substances. In this tournament, Lan’s outstanding performance was 52 seconds 78 in the women’s 400m content.

At ASIAD 2018, Lan continued to receive HCV 400m female barrier in a similar way with a record of 55 seconds 30 after the previous winner Kemi Adekoya (54 seconds 48) was stripped of her medal.

Having outstanding Asian achievements, but in the Southeast Asian tournaments, typically the SEA Games, Quach Thi Lan has never been crowned because of the excellence of Nguyen Thi Huyen. The female athlete from nam Dinh had 8 gold medals, including 6 individual gold medals. In the last 30th SEA Games, she overcame Quach Thi Lan on the 400m women’s runway with a record of 52 seconds 80. In addition, Huyen also won a gold medal at the women’s 400m fence. Most recently at the 2020 national athletics championship, Quach Thi Lan with a record of 52, causing 46, surpassed Nguyen Thi Huyen (52 seconds 49) to win gold.

It can be seen that with their achievements there is not much difference, the two champions Quach Thi Lan and Nguyen Thi Huyen will be the names that help Vietnam athletics shine in international tournaments in 2021.

Breaking the record of 34 minutes 48 seconds 38 of Doan Nu Truc Van set up at SEA Games 2003 at the 2020 national athletics championship in the women’s 10,000 m with the achievement of 34 minutes 08 seconds 54 proves the dominance of Nguyen Thi Oanh works in long range not only in Vietnam but also in the region. 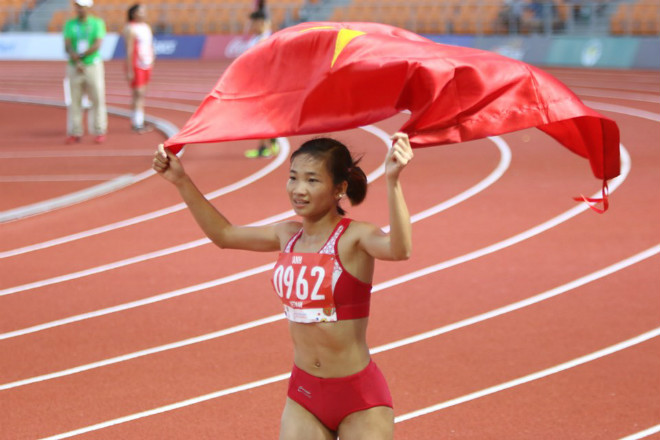 She also holds the Southeast Asia record in the 3000 meter obstacle course with a record of 10 minutes 0 seconds 02 (the old record is 10 minutes 0 seconds 58). However, this index is still far behind the 9 minutes 43 seconds achievement that helped her win the historic bronze medal for Vietnamese athletics in ASIAD 2018.

With constant progress and more investment in recent years, Nguyen Thi Oanh is expected to not only continue to dominate at the 31st SEA Games at home but also help Vietnam’s long distance track and field reach. than in the continent.