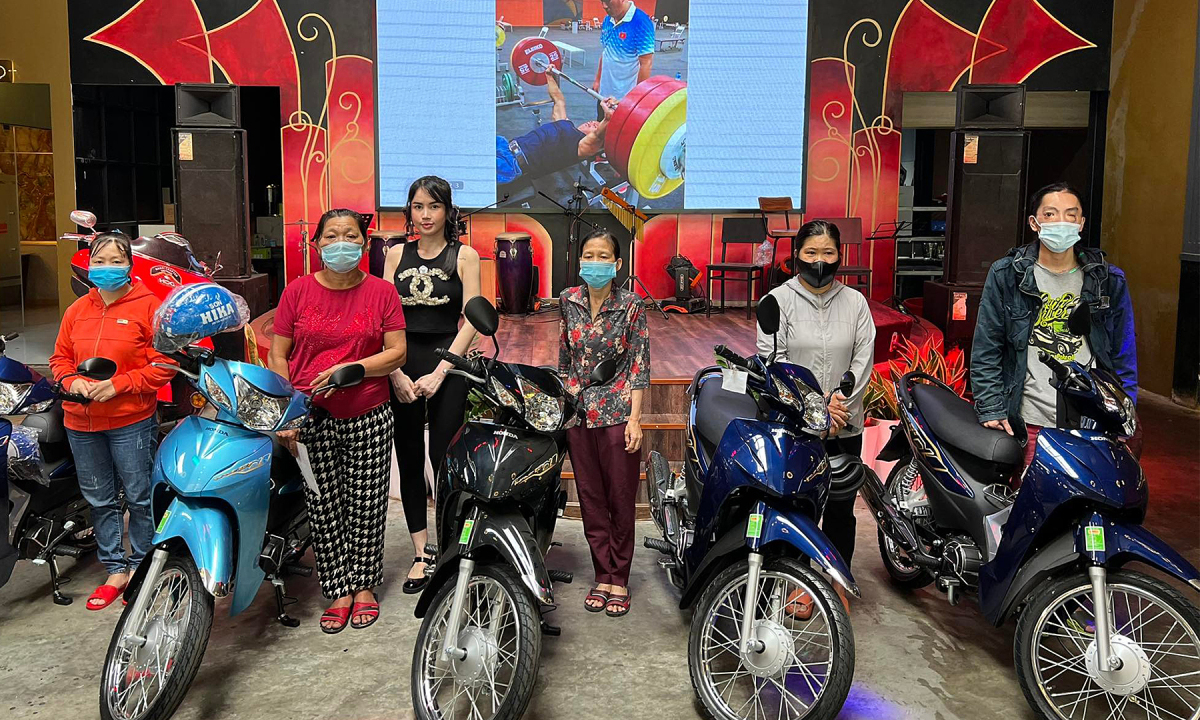 DanangNot holding parties and shopping like previous birthdays, this year Tuong Vi used 100 million VND to buy 5 motorbikes to give to the poor as a means of making a living.

Nguyen Tuong Vi is the owner of a cosmetics business, living in Hoa Thuan Tay ward, Hai Chau district. The money to buy a car for the poor was a gift from her mother on her birthday. The 9X girl thinks that in the situation where many people are struggling after going through the pandemic, this money should be to help the poor have a less difficult life.

She went on her own to find out about the difficult circumstances in Da Nang and decided to buy 5 new motorbikes for them as a means of livelihood.

On the morning of November 2, on her birthday, Tuong Vi gave the car to everyone. Pham Thi Chien, 58, who sells duck eggs on the sidewalk in Hai Chau district, said she had never dreamed of having a beautiful car like this. “There were a few times when people gave me an old car, but after a while, it broke down and I didn’t have money to fix it, so I had to walk,” she said after being given the car by Vi.

Tuong Vi said that she used to send money to charity groups to help people in need. This time, having time to learn about the situation, listen to people share and give gifts in person, she found the job much more meaningful.

Mr. Tran Vuong, the volunteer group Team 44 in Da Nang added that, in the last July, when he saw the flow of people from the South walking to their hometown to avoid the Covid-19 epidemic, Tuong Vi also donated 5 old motorbikes to people. walk or bike. “She was also the main sponsor for 10 bus trips that brought hundreds of people from the South to the North to their hometown last month,” said Mr. Vuong.

On the day he went to buy a motorbike, Mr. Vuong showed Tuong Vi an article about a guy named Hai, owner of a bakery in Kon Tum, whose face was burned. Thanks to the energetic guy who overcame guilt to master his life, Vi decided to donate a professional toaster of nearly 20 million VND.

From the day she directly volunteered, Vi was motivated to focus on developing her business career. She confessed, because her family was well off and her parents supported her to start a business, Vi had not really paid attention before.

“I can’t take money from my family to do charity forever. If I want to give a lot, I have to work harder,” Vi shared.