(Sports News, Tennis News) Medvedev reunites with the opponent who caused him difficulties 2 years ago, while Tsitsipas has the opportunity to “revenge” Adrian Mannarino.

On August 31, Daniil Medvedev entered the journey to conquer the US Open (US Open) quite smoothly this year when he overcame the French “old man” Richard Gasquet 6-4, 6-3, 6- first. The 25-year-old Russian national has just officially reached the 200-game winning mark in his professional tennis career. The next challenge at the US Open for Medvedev will be Dominik Koepfer. The player who is ranked 57th in the world just had to go through a dramatic battle lasting 5 sets to overcome Quentis Halys 6-4, 3-6, 4-6, 6-3, 6-4 in the first round.

Video of Daniil Medvedev winning Richard Gasquet in the first round of the US Open 2021:

However, the victory of the Greek No. 2 seed left many scandals after he was accused by former world No. 1 Murray that he had deliberately cheated when he went to the bathroom for 8 minutes to inhibit his opponent. After the first game of set 5, the set is decided.

Ignoring those controversies, Tsitsipas will have to focus on defeating Adrian Mannarino on the upcoming Arthur Ashe field. Remember, at the tournament in Zhuhai (Yu Hai, China) 2019, they also faced each other. When Mannarino had just won 7-5 in the second set after losing 3-6 in the first set, Tsitsipas had resigned before entering the third set due to an injury. Rematching the French tennis player after 2 years, the third ranked player in the world is determined to take revenge.

Also in the second round of the US Open men’s singles, at 10 pm on September 1 (Vietnam time), the 5th seed Andrey Rublev will face Pedro Martinez on the Grandstand. Then, around 6 a.m. on September 2, former 2017 US Open runner-up Kevin Anderson will face 11th seed Diego Schwartzman at Louis Armstrong Stadium.

The specific schedule of matches on Tuesday at the US Open 2021: 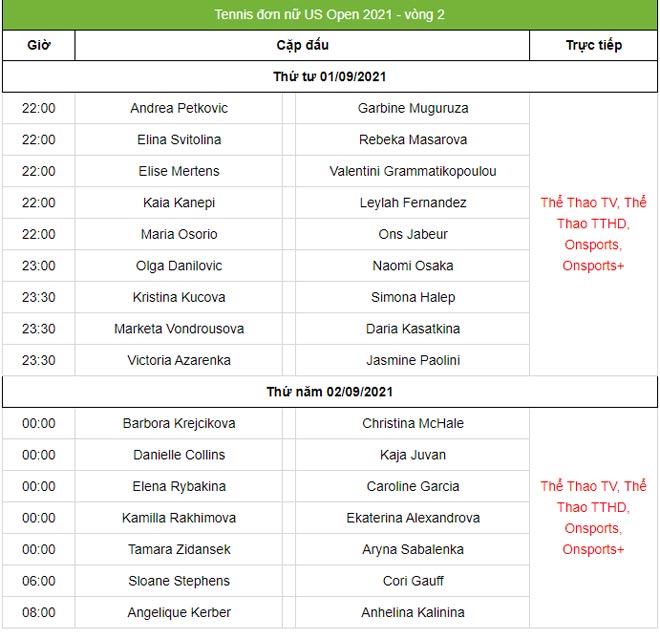