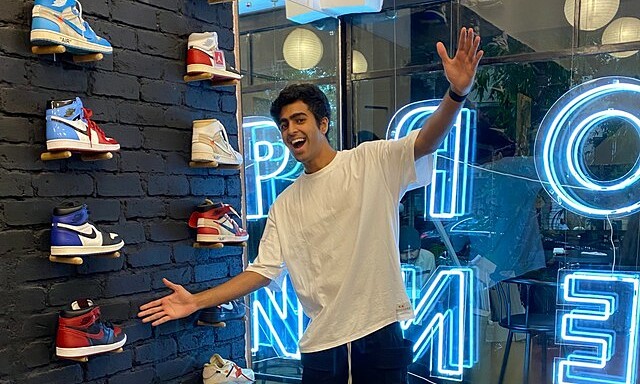 IndiaMany Gen Zs in India have entered the limited edition shoe resale industry to get rich, despite the risks.

At the age of 17, Vedant Lamba, born in 1999, owner of a resell fashion and sports shoe store in Mumbai, bought himself a pair of Adidas NMD with price 163 USD (about 3.7 million VND). Wearing new shoes out, he feels himself “like a god”.

“When I found out that the original stores were out of this version, I tried searching elsewhere and realized they were being sold at exorbitant prices,” Lamba said.

The resell industry (buying from genuine distributors and reselling to consumers) is quite popular in the world with a revenue of up to 30 billion USD by 2030. In India, the country is a big consumer of footwear. second in the world, the trend of collecting rare shoes for resale at high prices is booming.

According to Lamba, Indians like to flaunt their wealth with status, gold or property. And today shoes.

Likhit Sreenivas, 17, started reselling high-priced sneakers four years ago. He realized that the sports shoe market in India is heavily influenced by celebrities. Many people are willing to spend $ 10,000 when they see the artist wearing Air Jordan Dior, even though they do not understand anything about the brand just now. “The only thing they know about Dior is the high-end brand,” says Sreenivas.

Shoes like Nike Air Jordan or Adidas Yeezy are only sold by brands for a short time. To own, shoe hunters must have “insiders” who are employees at Nike, Adidas stores, or ask friends and relatives abroad.

According to Kapil, shoe stores often contact distributors directly to get goods. This is something that people cannot do, whether in line for two days in front of a store or waiting for 5 hours in front of a computer, the probability of buying is only 0.1%.

To increase their chances of being in the 0.1% group, many people use automated software (bots) to carry out the ordering and payment process “in the blink of an eye”.

Ishan Chauhan, 18, a shoe reseller in Delhi, admitted to using the Nike bot for business. “They don’t guarantee you’ll buy them, but at least they increase your chances of buying,” Ishan said.

Many young people flock to the shoe reselling industry, making this market gradually heat up. However, lack of experience from reality will cause them to “fall down”, especially scams.

In October 2020, 17-year-old Kabir Singh tried his hand at selling branded shoes by setting up an exclusive chat group on WhatsApp. Members pay a fee of $134 to access rare orders.

There, Singh got to know Sanchit Gupta, 27 years old. After many months of doing business, Singh cooperated with Gupta, agreeing to use the same account to trade and make money. “In the beginning, Gupta traded fairly, when I was busy studying for exams he would take money from customers to buy shoes. After a while, not a single customer received the shoes even though they had paid for it,” Singh said. Not only stealing from guests, Gupta openly accused Singh of being a fraud.

“He told the customer I was the one responsible. People started threatening to beat me up if I didn’t pay,” Singh said. Things only stopped when Singh’s family had to give Gupto $20,000 to stop the lies.

Kavaya Garg, 18, once received a pair of fake shoes when trying to buy them cheaply due to lack of capital. “Fortunately, I double-checked before delivering to customers. Since then, I understand the importance of verifying real and fake goods,” he said.

It is easy to make a profit, but most young people think that this job does not really bring stability in the long run. “I don’t think this is a sustainable business,” said 20-year-old Rishubh SV, a dealership owner from Bengalury.

Shoe dealer owners evaluate, resell shoes can develop in the next 5 to 10 years, but not forever.

Quynh Nguyen (According to VICE)