Unics Kazan has disturbed the world transfer market orange ball across Europe this past summer when bringing in a series of stars. Will the strength of this team be changed in time to prepare to enter the first fire test match against Zenit St Petersburg. The 2021-2022 season of the European Basketball Championship is currently being reported live, completely and only on FPT Play’s system.

Both Russian teams have made the necessary preparations before the opening match of the new season. Lorenzo Brown, Jarrell Brantley or Jordan Loyd, which new rookie from these two teams will shine in the match on October 1?

Unics Kazan and careful preparation in terms of forces

Summer 2021 is a period of full activity for the scouting team from Unics Kazan Club. As soon as they were promoted to EuroLeague from the 2nd division, the team representing the city of Kazan made contact with a series of cult players.

Unics Kazan got promoted after a determined season (Source: EuroCup) Lorenzo Brown is the new hope of the blue shirt team (Source: VTB)

With passer Lorenzo Brown on the field, Isaiah Canaan can have more hands free on the flanks to make three-pointers and picks up. Besides, Mario Hezonja or Jarrell Brantley can create double screens, then split and receive the ball in the trapezoidal area under the opponent’s basket.

Not as aggressive as the competition, in the last summer, Zenit St Petersburg only brought in 2 new players. The first one was Shabazz Napier. This player used to have 6 seasons in the NBA and the peak was when he wore the Washington Wizards shirt in the 2019-2020 season. At that time, Shabazz averaged 11.6 points per game and played 24.4 minutes every night. Jordan Loyd is an important addition to Zenit at the moment! (Source: VTB)

The second name is Jordan Loyd. This player won the NBA championship in 2019 with the Toronto Raptors club. He stands out in his ability to throw at medium distances, create assists and read the game very well. Last season with Crvena, Jordan Loyd had a scoring rate of 42.5% along with 3.2 assists/game.

With that much addition of both teams, Unics Kazan is dominating in terms of squad quality over Zenit St Petersburg.

Last year, Zenit St Petersburg made a miracle by pulling very strong team FC Barcelona to the final match of the tense Playoffs series. The initiative and stubbornness in defending and catching traps throughout the field are familiar points of Zenit. However, according to the latest information, Shabazz Napier has suffered an ankle injury and is absent for the match against Unics Kazan. This is indeed a great loss for Zenit St Petersburg. 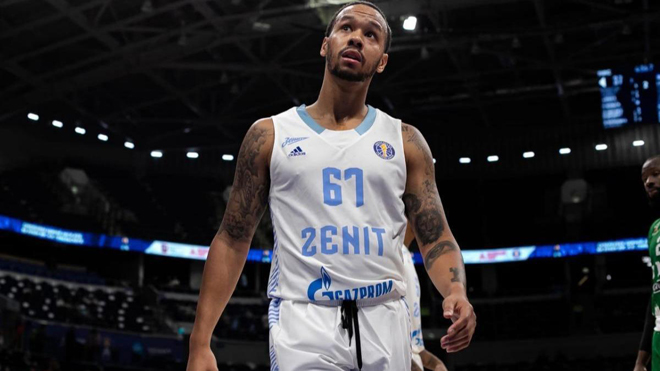 Shabazz Napier has not been able to make his first appearance at Turkish Airlines EuroLeague 2021/2022 (Source: VTB)

Meanwhile, with its new set of players, Unics Kazan is very diverse on the offensive front. OJ Mayo or Isaiah Canaan knows how to make 3-pointers. When it comes to power-ups or pick and pop situations to fool opponents, Mario Hezonja and Jarrell are great choices. And if you need accurate mid-range throw situations, Lorenzo is the right player. The match between Unics Kazan and Zenit St Petersburg will take place at 23:00 on October 1 at the home of Hall Kazan of Unics. This will be an interesting confrontation when both clubs are familiar with each other in the domestic league but it is a rare encounter at a larger playing field.

Basketball fans can easily enjoy the Turkish Airlines EuroLeague tournament on FPT Play system. From only 88,000 VND/month with the MAX/ VIP package, hundreds of dramatic basketball matches will be waiting for orange ball fans at: https://fptplay.vn/xem-truyen-hinh/bong-ro-1. It is known that FPT Play has purchased the rights to broadcast all three consecutive seasons from 2020 to 2023, including all matches in the two stages of the group stage and the play-off round. Accompanying the fiery matches were a series of programs and newsletters accompanying the audience throughout the tournament, which were deployed continuously and extremely excitingly by FPT Play.

In addition to the EuroLeague Basketball Championship, the sports tournament system that FPT Play has and currently owns also includes: UEFA Champions League, UEFA Europa League, 3rd Qualifiers of World Cup – Europe Asia or tournaments under the framework of AFC and attractive MMA fighting sports tournaments such as KOK, PFL or Bellator…