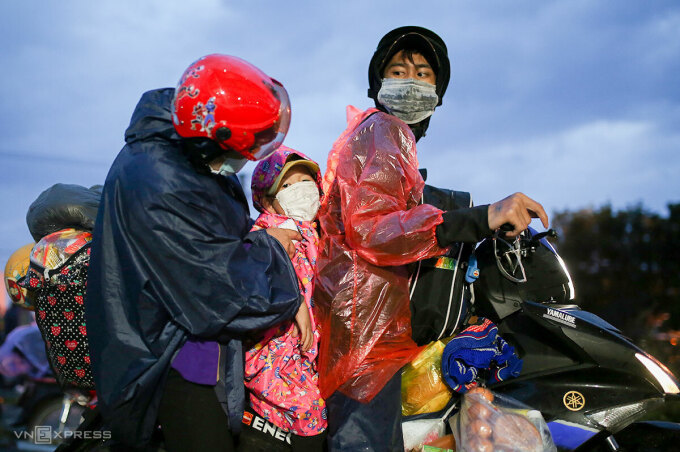 After returning from the cities, some are determined to stay in their homeland, others are moving back to the southern provinces.

Near noon, Mr. Binh put on a raincoat and carried a rake to the beach. Under the umbrella tree in front of the house, Mrs. Gai and his wife sat idle with a pot of mannequin tubers that had not yet opened a shop. “Another day of snacking,” said the 50-year-old woman.

Since the outbreak of the 4th Covid-19 epidemic, the couple has set a goal, every day he has to rake 3 kg of clams equivalent to 60,000 VND, she also has to earn that much from the burden of snacks to make enough money. raise 3 children of school age. “Every month, my family has to pay more than a million dong for electricity, water and bank interest. The rest must be pulled to be enough,” she said.

In Quang Thai commune (Quang Xuong, Thanh Hoa), Mrs. Gai and her husband are among 50% of the households who have to leave the country to make a living. From the late 1990s until now, every year Mr. Binh and Mrs. Gai have been separated for 11 months. In 2019, she suffered from spondylolisthesis and had to borrow money for surgery. Two years ago, after several outbreaks of Covid-19, the couple’s work was severely affected, and the family situation became more and more difficult.

At the end of April, they had to go back to their hometown to take care of their brother’s funeral, then they could not return to Binh Duong anymore. Mrs. Gai said that “there is also good luck in misfortune”, but with a sick body and no savings, she is sure that it is difficult for her and her husband to live through the long distance. “Since last year, my wife and I have been bored, but at home we are too hungry to lead us,” she said.

More than four months at home, they realized that their children were growing old, especially the youngest son, and needed their parents to be there to teach them. Moreover, their age can’t bear the “typhoon” like waiting for this epidemic, so they decided not to return to the city anymore. Grandparents intend to open a grocery store in their hometown, but still don’t know how to get capital. “There are no savings, only liabilities,” she said sadly.

Gai and his wife were among more than 1.3 million workers returning to their hometown to avoid the epidemic, from July to September 15, according to the General Statistics Office announced on October 12. Of the 930,000 people aged 15 and over who have returned, only about 34% are employed, 38% have lost their jobs, cannot find jobs due to isolation and distance, and the rest have no need to work due to e. afraid of disease.

Among 34% of people who are lucky to have a job after returning home, Mr. Vo Thanh Binh, 28 years old, from Nghi Loc, Nghe An said that now in favorable days, he can earn 200,000 VND, after applying to be a shipper. for a business in the district.

Although the income is not high, Binh is quite satisfied with the job. His wife is working as a worker near his house, and his two children are in primary and secondary schools, so he still has enough to live by working hard. When asked if he will return to the South to work as a hired worker in the near future, Binh affirmed that “definitely won’t come back”.

“Five years away from home is a difficult time I have spent to earn money to support my family, take care of my wife and children. Now I come home to have rice and porridge to eat, but my spirit is comfortable, I have relatives, neighbors rely on,” he said.

Mr. Binh’s family once attracted the attention of the online community when cycling from Dong Nai to his hometown with VND 800,000 as a toll in early July. Binh has only been working for a week now. His mother is renting a roadside kiosk to sell goods, while his sister is also looking for a part-time job in her hometown.

Mr. Pham Hoai Nam, Director of the Department of Population and Labor Statistics, said that “it is quite difficult to attract workers back to industrial centers and big cities”. The epidemic prevention and control policies of many provinces and cities are very different and workers cannot predict the stability of these measures.

According to Mr. Pham Truong Son, Vice Chairman of the Southern Non-Profit Network, the labor attraction policy must calculate the problem of “settling down and getting a job” for people from outside the province. Being stuck for months in a cramped room, below the threshold of survival, plus the fear of the epidemic and money had a profound impact on their decision to return or not.

In order to “settle and settle down”, issues of social security, social insurance, health and education for migrant workers as well as their children are very important. The current life of migrant workers is not only living and working, they must be integrated into the community where they work. “Let’s see them as part of the city,” said Mr. Son.

In parallel with the “reverse migration wave from the city to the countryside”, a few days have also recorded hundreds of people returning to Ho Chi Minh City to work.

In Tam Phu commune, Tam Ky city, Quang Nam province, 31-year-old Nguyen Van Khanh said goodbye to his wife and children, and three other people entered Ho Chi Minh City on the morning of October 8. All four have had two vaccines, in the same situation, cannot find a job in their hometown, rented a private car for 10 million VND.

Khanh calculates, goes to work in the city, earns 8 million VND per month, he can send 4 million VND to his wife and children. “At night I can work as a shipper to earn extra money,” he said.

To come to this choice, he spent two days and nights “brainstorming”. Khanh said, in 2013, he left his hometown and moved to Ho Chi Minh City to work as a driver, then married his wife as a hairdresser. When the epidemic broke out, Khanh and his wife were unemployed for several months. Fortunately, they were picked up by the government by plane, because Khanh’s pregnant wife was about to give birth.

In parallel with welcoming workers, the People’s Committee of Quang Nam province advocated creating jobs for 4,500 workers to return to their hometown to avoid the epidemic. Under this policy, Khanh registered to work as a taxi driver, but due to the impact of the epidemic, this profession was sluggish. “I have a desire to apply for a job as a driver in industrial parks and companies in Quang Nam, but there is no place to hire, and taxi drivers do not have a high income,” Khanh shared. Returning home for more than two months, Khanh was unemployed.

In early October, Ho Chi Minh City ended the distance, and the business where Khanh worked before announced that it was back to work. Weighing and counting, Khanh decided to go so that his wife, 5-year-old daughter and second child were about to be born in peace at home.

The night before the departure, Khanh’s wife encouraged her husband to rest assured. With 4 million dong sent by her husband every month, she can still take care of 1.7 million dong for her daughter’s education, baby’s diapers and food. “In the countryside, my parents provide rice and vegetables, so I save a lot,” Khanh said.