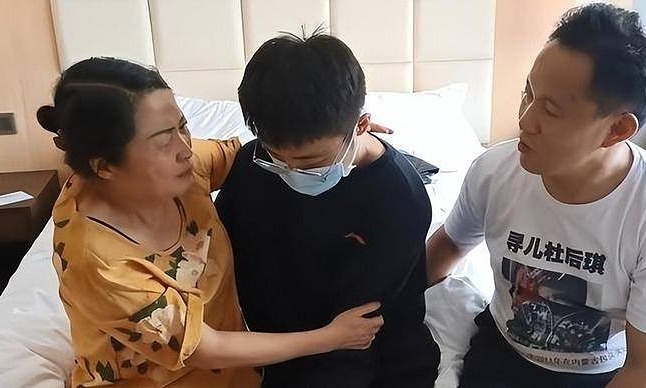 ChinaMei Zhiqiang, the son of a millionaire in Yunnan, has just reunited with his family after 25 years of being kidnapped and adopted by another millionaire in Jiangxi.

In 1997, on a rainy day, Mei Zhiqiang, over two years old, was kidnapped while playing outside her home in Yunnan. After losing their son, the millionaire family offered a reward of 50,000 yuan (about 173 million VND) to the person who found the boy but to no avail.

Mei Zhiqiang’s mother is depressed, many times want to commit suicide. Since then, their family is no longer a true home. The mother searched for her child everywhere despite her white hair, living in torment and tears.

In April 2022, thanks to the support of social network users, the police found the whereabouts of the kidnapped child. On May 15, through two DNA tests, the boy Mei Zhiqiang, now 27 years old, was found in Jiangxi.

A day later, the parents and sister went to a hotel in Putian, Fujian, with the police, to meet Mei Zhiqiang. The mother stood in the lobby, frowning repeatedly from the tension. Mei’s sister holds flowers, anxiously waiting for her. Seeing the lost child, they emotionally shouted “How many years have you been looking for children”, then stepped forward, hugged Mei tightly, and patted her.

Despite wearing slippers, Mei Zhiqiang wears a Rolex watch worth hundreds of thousands of yuan. As it turns out, Mei’s adoptive parents are also a millionaire, the owner of a private hospital worth more than 100 million yuan. Over the past 25 years, he has not had to worry about food and clothing. However, Mei did not continue her education after graduating from high school.