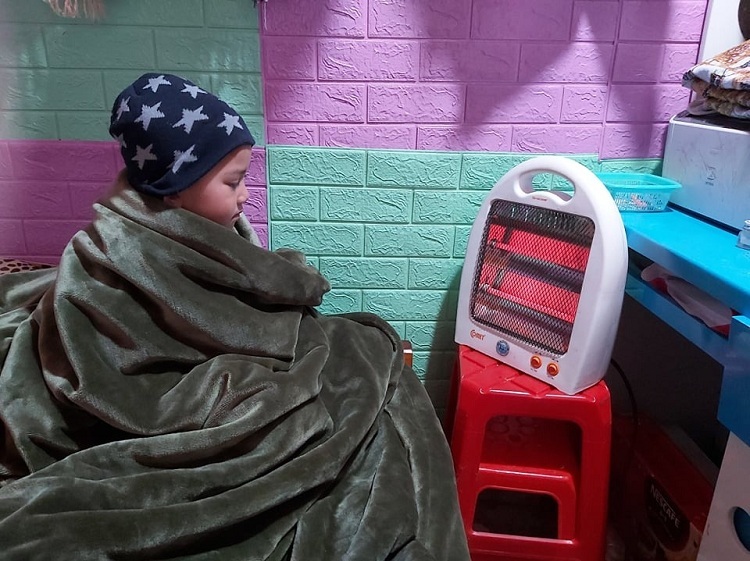 This week, the mother and daughter of Mrs. Thu Hien in Ha Giang always have the main dish “hot pot” because the other dishes are always served cold, when the outdoor temperature is only -2 degrees.

9 a.m., the female preschool teacher, who is raising a child by herself, just got out of the blanket. Wearing three tight-fitting shirts, wearing a life jacket, wearing a woolen cap that fell down to her eyes, she went out to turn on the hot water for personal hygiene. Cu An, the four-year-old son, saw his mother waking up in puberty but did not dare to stick his head out, although he was very active.

On the occasion of the New Year, the temperature in the headland of the country dropped to 3 degrees, she took the advantage of four days off to bring her children back to her hometown in the Central region, intending to send her grandparents to take care of her children until the Lunar New Year, but to heaven. cold, love it. But until now, his mother got in the car back in Ha Giang, the little boy hugged his shoulder and cried: “Mom, I miss you”. Unable to bear, she took the baby along.

The mother and daughter went to the boarding room about 6 km from the school site. After two sessions, the temperature dropped to -2 degrees Celsius. The trees froze, the school also stopped. Hien and her son did not walk out the door for three consecutive days.

Living in the highlands for more than 20 years, the female teacher understands the harshness of the cold and is quite well prepared, but from the day she has a small child, everything becomes more difficult.

The boy was feverish for two days. The hospital is far away, she covers her child with a blanket, then goes to the medical station to take medicine, stays up all night to wipe her. On the third day, Cu An awake. It was cold, did not want to run and jump, there were some teddy bears, and it was also boring to play puzzles. It was cold so every house was closed and silent, the boy had no friends. Cu An was fussy and crying, Hien had to cover her children with a blanket to watch the computer. “Knowing is not good, but there is no other way,” she lamented.

Before the cold air intensified, Hien had prepared some reserved food. Every day, waiting for noon, the temperature inched up a bit. She went to the garden, picked vegetables, arranged rice, fried eggs, and cooked meat for her children. But the hot food was stinking, the tray was already cold, the meat was frozen. In the following meals, Ms. Hien takes the initiative to “eat hot pot”, that is to cook a pot of bone broth, where to cook on the kitchen, dip vegetables and meat to hot.

“It was so cold that one day I picked vegetables, my hands were frozen, and put them on the stove, until the smell of my nails burned,” she said.

To keep her child warm, Hien wears several layers of clothes for Cu An, takes a bath with cajeput oil, applies black garlic oil, drinks milk, warm water, and takes ginger candy. The fan is almost turned on 24/24 but talking to an acquaintance over the phone, her voice is still trembling with cold.

On the morning of December 11, sleeping, the mother and daughter of the preschool teacher woke up because of the cold, the room was dark. Turns out the power was out, the fan heater, the electric blanket were off. Cu An has a runny nose, trembling because of the cold. The mother hurriedly put on her coat, bought smokeless coal to burn for her, opened the door to warm her baby.

“I also have warm blankets, soft mattresses and food to eat. Many students here are cold, still have to wear honeycomb sandals, every week only wear a warm shirt”, Hien said.

In Cao Loc, Lang Son, where Mrs. Thu Huyen lives, the temperature does not drop as deeply as Dong Van, Ha Giang. However, the 7 degree weather was also enough to make her miserable because she had to take care of a baby for the first time in the cold weather. For several weeks now, she has sent her one-year-old child to her grandmother’s house to live temporarily because she is closer to work. The boy often coughs fever, runny nose, fussy, while the work of a Secretary of the Union at the end of the year is busy.

To prevent cold, Ms. Huyen wears two sweaters, two life jackets, a hat and gloves for Cu Mai. In the morning, she applied cajeput oil and spent 10 minutes massaging it from face to feet to warm up her body. In the evening, I soak my child’s feet with warm salt water and fresh ginger.

“I dare to bathe my child once a week, but I have to take a ginger bath to keep warm. Eat well in bed, pee also bring the potty to his bed. The kid is naughty, so my grandfather has to show the electricity new phone will sit in one place, “said Ms. Huyen.

Hanoi has just experienced a cold spell. In Hong Hoa’s child’s class, more than 30 students are absent. The journey from Mrs. Hoa’s home to Mun’s school is just over a kilometer, but suddenly longer in days with severe weather. After the New Year holiday, her daughter went to school for two days. On the third day, she had a high fever and had to quit school. For a week, the young mother takes unpaid leave from work at home to take care of her baby.

The 50 m2 apartment is always closed, turned on the power day and night. Mr. Tuc, Hoa’s husband, buys more blankets, fans, and toys to keep their children in the house, trying to stay away from computers and telephones. She changed clothes, washed her with warm water every day. But instead of going to the bathroom, the father carried a basin of warm water into the bedroom, shut the door tightly, directing the heating fan at his son to help cool.

“Two days in a row, I almost always turn on the fan. Suffering, the fan radiates hot air again drying the skin. The boy chapped his lips bleeding again. The fever is high, the mouth heat sores, the pain keeps crying.” tell.

Most miserable with the couple Hoa is Mun refused to wear diapers. Although it was deep sleep, parents put it on, it also woke up and cried loudly. But I don’t know how to call when I’m sad to go to the bathroom. Tear, but several nights, husband and wife change clothes and cover the bed sheets to sleep.

On the morning of January 12, the temperature in the North in general and Hanoi and Lang Son in particular began to get warmer. Ms. Huyen plans to return her child to her paternal house from next week to be close to her father. Baby Mun, Hoa’s daughter, was also quicker when she saw the sun peeking out the window. I plan to send my child to school the next day.

In Ha Giang, the outdoor temperature inched up 5 degrees. Ms. Thu Hien passed her son to the school to make peach branches, apricot branches to decorate the classroom. If nothing changes, starting January 14, the school site will open again for students. “The weather has the right to change, and I have to learn how to adapt. I know from now to the end of the lunar year, there will be other cold and damaging waves, but life must go on, unable to close. ice forever, “Hien said.

The National Hospital of Pediatrics recommends that, in cold weather, children are susceptible to respiratory infections, such as rhinitis, pharyngitis, tonsillitis, otitis media.

Children need to live in a well-ventilated environment, doors should be sealed to avoid drafts, bedrooms are clean. If in a dirty, polluted and humid environment, children will be at a higher risk of respiratory diseases.