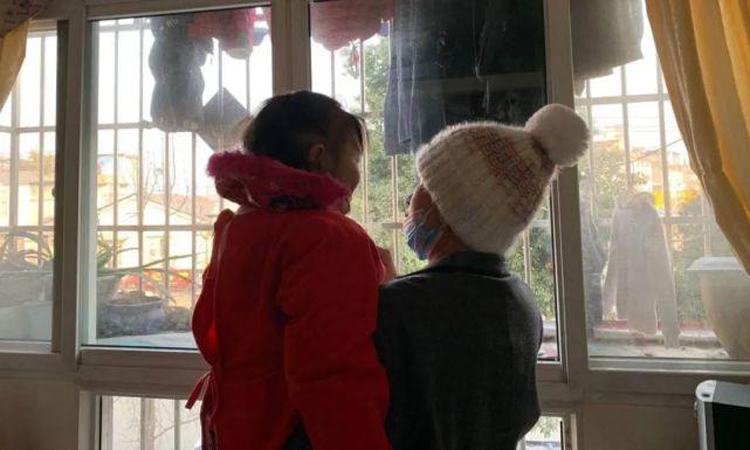 ChinaTo have money to repay the debt, Ms. Ngo Yen Yen decided to become pregnant, but the baby in the womb was not the same bloodline as her.

In 2016, this 43-year-old woman came from Chengdu to Shanghai because she read the information “High salary recruitment: earn 200,000 yuan (VND 720 million) a year”. Texting the phone number on the recruitment leaflet, she was introduced to it as surrogacy. Thinking of the huge amount of money she made, not only enough to pay off her debt but to help her open a small store. “I agree to participate,” Wu answered emphatically by phone.

She did not tell anyone, not even her parents, of her decision. She went to Shanghai and underwent many medical examinations.

At that time, Ngo did not understand what surrogacy was, just followed the arrangement of “company”. After a physical exam, she started taking pills, injections, examining the endometrium and preparing for a transplant. Corn is “the company” arranged for a nanny to take care of, not having to worry about food, clothes or transportation.

The seventh day after a physical exam, Ngo was told the thickness of the endometrium was up to the standard and was ready for transplant the next day. She remembers being taken to a place like a medical facility, surrounded by 20-30 women waiting for her turn. A total of 3 embryos were placed. Recalling the moment of the procedure, Ngo was in no pain. “I just feel throbbing because I suddenly became a mother. But the motivation is going well,” she said.

Successful surgery. According to the instructions of the “doctor”, Ngo was allowed to go home to rest and limit activities. “Must refrain from vigorous activity even sneezing”, instructed the nanny. Ngo became cautious, outside eating and going to the toilet, the rest of the time was just lying in bed. The seventh day after the transplant, she took a pregnancy test and showed two lines. On the fourteenth day, Ngo was taken to the hospital to have a blood test, showing that she was pregnant.

Ngo’s 200,000 yuan remuneration was not paid in lump sum. Under the “company” rules, 15,000 yuan of this amount is paid in increments of the months of pregnancy, in addition to a “fixed salary” of 2,000 yuan per month. The remainder upon success will be paid later.

When she was one month pregnant, Ngo had bleeding and scarred, she put her hand on her stomach and said, “You can come to this world by working hard. We can get out of the predicament together. this “. It seems that a “contract” was made with the little spirit in his womb, Ngo wished for a favorable baby born to collect enough money.

After three months of pregnancy, Ngo filed a hospital profile with the client’s wife identity. During the routine checkup that followed, she found she had syphilis. This woman insisted she did nothing to cause illness. “If there is a problem, the company must find out right from the initial checkup,” she argued with her nanny. Mai argues that the transplant media itself is not clean or that the embryo deposited is problematic.

The company asked her not to tell customers, wait for them to think of a solution. But Ngo did not expect that the customer after learning she was pregnant had crossed thousands of kilometers from Inner Mongolia to visit. It was a couple over 50 years old, had a son, but died in an accident, so they found someone to hire. The couple bought a lot of delicious food for Ngo and handed a thank you money envelope. Seeing them so good, she felt guilty.

That evening, she texted her wife saying she had syphilis. “I can’t keep lying to you,” the other side just kept silent. Through preventive treatment, Ngo cured the disease after 5 months of pregnancy. At the same time, she receives a call from her client, asks for an abortion, and doesn’t want to resume her contract.

On that day, Ngo stayed up all night, with two streams of his mind. One was she left the baby in her womb, the other was worried about giving birth to an unhealthy baby.

Early in the morning, Wu decided to leave Shanghai. She was afraid that the company would put her in the labor circle. At that time she received only the initial 15,000 yuan and a “fixed salary” from the company. The idea of ​​surrogacy to pay off formal debt has failed since that point.

At the end of 2016, Ngo returned to Chengdu and intends to abort. However, the doctor insisted she was healthy and so was the baby. Moreover, the baby in the abdomen is more and more moving. She always kicked in front of her chest, when she felt her stomach saying, “Honey, your mother hurts.” As if understanding words, the child was obedient.

Tension, excitement, expectation, and more and more emotions emerge from the little creature, the memories of Ngo’s first motherhood are awakened. Increasingly, she felt that the baby in her womb belonged to her.

When she was 9 months pregnant, Ngo went to the market to find a job because she ran out of money. She was introduced to a divorced man surnamed Zhang. When she met, she told Truong about her situation and the baby in her womb. The man says he doesn’t mind and takes her home to take care of her. Truong cared more about the baby in Wu’s womb than she expected, even thinking that if the two of them could not stay together later, he could give the baby to him.

In the document provided by Ngo, another woman’s name was written in the mother’s name column upon admission. As explained by Ngo, at that time she and Truong were not married and did not want him to bear the hospital fees. Since she had no money, she sold the child’s birth certificate to someone else.

April 2017 underwent a caesarean section in the hospital. When he first saw Coco with two dimples, Ngo had the only thought of bringing her happiness. After their daughter was born, Ngo and Truong got married. This woman felt her life was finally “blossoming”.

However, the application for household registration for her daughter has problems, and Ngo and his wife ask for advice, they will be instructed if they do not have a birth certificate, they must submit a blood relationship test. Both of them are not related by blood to Coco, so they bought a fake birth certificate and then made a fake blood relation paper … being tricked to lose hundreds of thousands of yuan.

Along the way, in December 2020, Ngo found Coco’s biological parents in Inner Mongolia in the hope of giving her a proper family. Unexpectedly, this couple then asked someone else to successfully conceive a twin. Seeing Coco’s photo, the father just said “Very well” but did not intend to accept the child. He also made no promises to give her material support.

To Ngo, she regretted many things she had done since she started her surrogacy, but is happy with Coco’s appearance. Although she is not related by blood to anyone in the family, this girl always enjoys love from everyone. Although the family is poor, Coco has been raised with imported milk and imported diapers since birth. Whoever goes home buys countless toys for her.

“I want to go to school” is Coco most frequently. She also loves to dance, just listening to music is going to stretch her small hand. I want to send my children to school, but nowhere to receive because Coco does not have a household registration book.

Ngo is increasingly uncertain where she and her daughter will go. Recently this woman started asking her child: “Does Coco like her mother?”, She nodded every time. And when she saw Ngo crying, Coco ran to her mother’s face and wiped her tears. The mother smiled again, muttering enough for herself to hear: “You’re so good, when you have a household registration, you can learn to dance and sing.”

Vy Trang (According to the ynet.com)