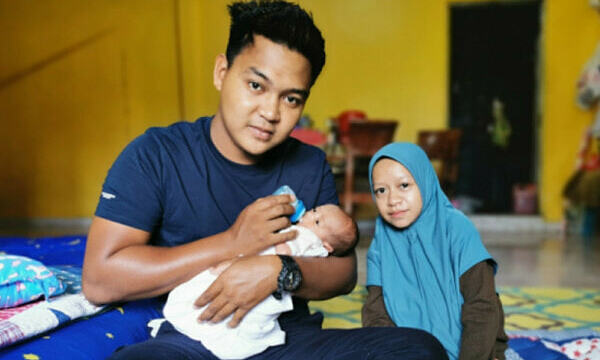 “Little girl” – the nickname many people gave to Syakila, gave birth at Sultanah Nur Zahirah Hospital, Terengganu, Malaysia, in the joy of both families. The boy is the fruit of her love story and Muhammad Azri Zaidi, her husband is 8 years younger.

Two years ago, Muhammad met Syakila while playing an online game. After a few talks, the 18-year-old was conquered by his 26-year-old “sister”. The first time they met in real life, Syakila was self-deprecating because of her small body, but the young man decided not to change his feelings.

“She’s different, but perfect in my eyes. We complement each other’s shortcomings. I don’t care what other people say, as long as we’re both happy,” Muhammad shared. .

And Syakila gradually felt Muhammad’s sincerity because he never complained about her appearance. “This can show Muhammad’s maturity, despite the age gap between us. Even his family loves me unconditionally,” she said.

In March 2021, the couple held a wedding. They entered the sanctuary before the blessing of relatives and friends and made emotional vows for each other. Muhammad says that Syakila is the one he is looking for. He loved her for her confidence, pure soul, holiness, and understood him better than anyone. In particular, he has never considered the difference in appearance to be the problem that hinders love.

After getting married, the tiny girl did not dare to think that she could get pregnant because of her small stature. “But fortunately I was pregnant. I didn’t even have any difficulty with pregnancy and childbirth except for more monitoring,” said Syakila, who officially became a mother to everyone’s blessing, confided.

The 28-year-old girl said that she is living the happiest days of her life. When the son is growing up day by day, he is cared for and cared for by the whole husband’s family.

Minh Phuong (According to Worldofbuzz)