(Sports news, martial arts news) An unexpected statistic shows that Pacquiao’s ability to make money with his fists is number 1 in the world.

Floyd Mayweather is a boxer who has never failed, a 44-year-old boxer who has gone through a series of 50 fights with all wins and is the best earner in the martial arts village when touching a fortune of more than 1 billion USD. In terms of talent, popularity, influence…Mayweather is currently one of the greatest boxers.

Pacquiao’s punch (right) is the most expensive in boxing

Talking about the ability to make money, certainly no one can surpass Mayweather, but if the statistics of the number of profits obtained through the “Single and defeated” punch are still ranked below Pacquiao.

The profit earned through 1 punch was recently reported by Bonusfinder and surprisingly, Manny Pacquiao is the number 1 boxer in the world.

In the competition against Mayweather himself in 2015, despite losing by scoring against the opponent, the Philippine Boxing legend still received 150 million USD. In which this boxer launched 85 accurate punches, equivalent to Pacquiao receiving $ 1,851 million (more than 42 billion dong) for 1 punch.

Number 4 on the list is Conor McGregor, an outsider but famous when he boxed with Mayweather. The fighter who is competing in MMA for the UFC has earned $ 85 million fighting Mayweather. “UFC madman” launched 111 punches (equivalent to 1 punch receiving 765,766 USD).

The character in the remaining top 5 is Anthony Joshua, the British boxer in the match with Andy Ruiz Jr in 2019 received $ 60 million in prize money. He threw a total of 107 punches, and each hit earned him $560,748. 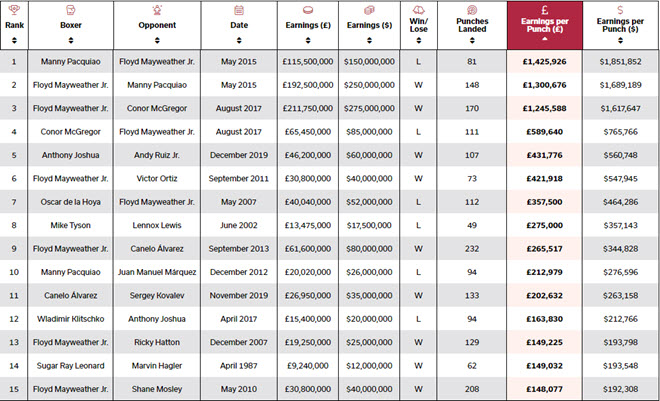 Statistics of 15 most expensive punches in Boxing history

(Sports news, martial arts news) Floyd Mayweather did not hesitate to tell the secret about the fight with Logan Paul that brought him another 100…