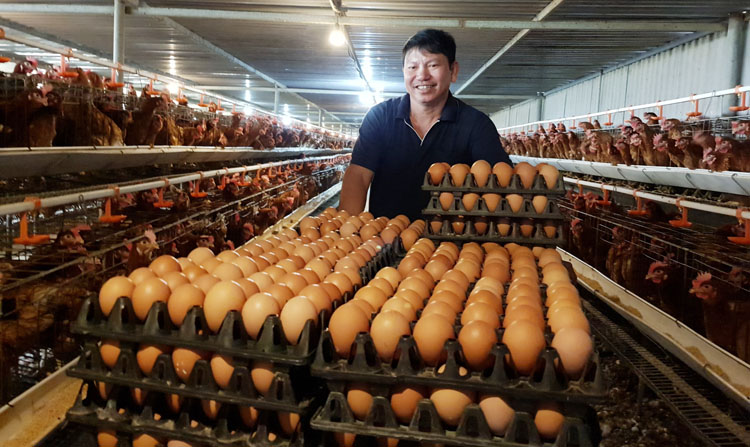 Hai DuongWith billions of money in hand, but when 5 brick kilns were stopped, Tran Van Manh and his wife decided to put everything to start a career by raising chickens to lay eggs.

Lying in the middle of the field, it took about 3 km to arrive, but the farm owner Tran Van Manh was determined not to build a bridge from the road to get closer because “my husband and I like to live far away from crowded places” . The 50-year-old man confided that for more than a decade, he and his wife were almost completely in the grade 4 house in the middle of the farm because they just like to wake up with the sound of chickens, the sound of fish, and the baffles puffing under the pond.

This year, it is expected that revenue from his two super-egg chicken farms in Long Xuyen ward, Kinh Mon town, will bring about 12 billion VND. Chicken manure also helps the farmer to pocket 15 million VND per month.

His father died early, his mother was sick, so he had just finished high school, and Mr. Manh was urged to marry. At the age of 20, he fell in love with Ms. Nguyen Thi Bay. The couple traded baskets, sold pots, and earned capital to open brick kilns. Around the years 1990 -2005, he and his wife had 5 handmade brick kilns, sometimes earning 50-100 million / year. The farmer’s children, so he “carefully” converted all the interest into gold and deposited it in the bank.

Profits are high, but his brick kilns are also very risky. Coal smoke burned the oven many times, damaging the farmers’ crops, he had to bring money to the temple. Knowing that this job is not sustainable, in 2003, when the policy of land consolidation and exchange was introduced, Mr. Manh bought a land acre (3,600m2) in the fields of Ngu Uyen village, Long Xuyen to save it.

Only two years later, the craft of making bricks was required to stop working. He broke the furnace, switched to trading bran, raising pigs. But the epidemic of blue-eared pigs was raging, bran sold a few buyers, and had a lot of debt. Finding that unstable, he stopped raising pigs, gradually withdrawing his capital to find other jobs.

Thanks to the time of trading bran, he was exposed to many farm owners, so he knew about raising chickens to lay eggs. “Both seed money and food cost per chicken costs 150,000 VND per year on average. If it is good, a chicken can give about 320 eggs. Selling 1,000 VND / fruit will make 170,000 VND profit. Raising 3,000 children per year will profit more than 500 million, “he calculated to explain the reason for the conversion.

In 2008, the couple drove each other to the bank to withdraw money and gold from the bank to build a farm to start a third business. Where to visit, see how to design barns, install the scientific drainage system, he kept in mind to go home, Mrs. Bay carried bricks for her husband to build. In the first year, he raised 3,000 hens to lay eggs, and found interest, so the following year he built a barn, raised 15,000 children.

One winter day after three years of starting a business, when he woke up at 4:00 in the morning, Manh did not hear the sound of chicken claw as usual. Visiting the barn, he caught the eye of dozens of chickens lying sprawled in the barn. If the child was still alive, he would groan, stop eating, and go green and white due to the disease of New Zealand (chicken poop disease). The boss knows that big hole.

Days later, the couple opened a war to rescue chickens. Every day we stay up until 2:00 in the morning to give the chickens medicine and injections, but it cannot be saved. Lying to hear the wheezing of sick chickens, the farmer and his wife were restless because of their regret and love for them. In the morning, the two split up to collect dead chickens. Peak day to 300 children.

The plague that year killed more than 5,000 of the 15,000 chickens on his farm. Many survive but are no longer able to lay eggs. They continued to pile up red books, borrowed nearly a billion from the bank to buy new seeds and invest in additional facilities. “This is the first time my family has to go to the bank to borrow money. Everyone does not regret losing money, but he encourages me to do whatever I do, I will lose my tuition,” recalls Bay.

Several years later, the chicken died of old disease, the owner did not want to lose the third school fee. He scouted for new seed companies, they hired another unit to take care of them. Because of wanting to make more profit, this unit evaded and vaccinated the chickens to get sick. Since then, for every day old chickens, he bought them and raised them for self-vaccination. Doing so much without books, sitting with guests, the man can still read the names of more than 10 vaccines, the annual vaccination schedule for chickens. “Now I only need technical support from any strange and complicated disease,” said Manh.

Mr. Ha Van Bac, director of a veterinary company, said: “Mr. Manh is a hard-working and inquisitive person. What is the problem with chickens? He immediately asks for advice and understanding. Nearly one. This year, you have not asked us for advice “.

The following year, the backgrowth was growing steadily, but no one bought eggs for sale. Mr. Manh loaded the car and ran all over Hai Duong, Hung Yen and Hai Phong cities to dump the agent. The market sells 1,000 VND / fruit, he sells for 900. Many agents fail to do business, he lends money for 3-4 months to get money. Later, he bought a 2.5-ton truck, transported eggs to agents, and imported bran from companies to bring to farms for profit.

Every year the disease epidemic, the year the egg price plunged, the chicken farmers gave up more and more, the farm also reduced the herd. Demand is higher than supply, so the price of eggs is more than 2,000 VND / fruit, Manh wins. There are times each day profits from eggs up to 15 million.

In 2017, he discussed with his wife to invest 6 billion to buy more than one hectare to expand the farm. This time, Ms. Bay protested. “Doing one is too exhausting, I can’t do anything else”, she irritated her husband.

A month later, Mr. Manh had to take his wife 4-5 times to the land to buy and discuss the plan. He showed his wife where to build chicken coops, where to dig ponds for fishes, to raise fish, and where to grow fruit trees. With his mouth closed, the husband calculated for his wife to build capital, buy chickens, how much food, when to pay back. “Before he calculated, I just follow, this time too”, said Ms. Bay. Being persuaded by “the owner cum guard of the farm”, she surrendered. The two farms currently have 30,000 chickens and 900 cubs under the pond.

Also, the revenue was negative when the price of eggs plunged sometimes, but thanks to the stable capital and the prosperous income the following year, Manh and his wife overcame the price storm. Last October, he became one of 63 people who received the Certificate of Merit for Outstanding Vietnamese Farmer in 2020.

There are billions in hand, but the farmer is used to a dark T-shirt, dust dust pants. Once, he was in a hurry to work on the farm, so he wore low-legged, high-legged pants to a helmet shop and asked the owner to sell the best three. This person looked at the guests from head to toe and said: “My family is in the city, earning 15 million per month, I only use a popular hat. What a farmer needs genuine hats, take what just to save”. Mr. Manh thought: “equal to one day working on the farm”, but just smiled and then moved to another store.

For more than ten years, the two-storey house built in 1991, just over 3km from the farm, Mr. Manh’s family rarely returns because of the passion for chickens, there is still no “signs of cooling”. “To the bank the gold earned from the day making brick kilns for profit, my wife and I are also leisurely, sometimes having enough money to buy a house, buy a car. But still have to work, children and children also look at and try. try, “he said.