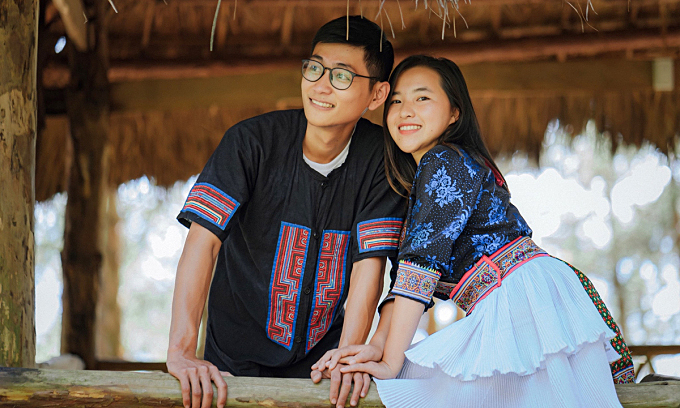 The pandemic has turned the lives of millions of people upside down, but it also unintentionally created opportunities for Evan Farfan, Thanh Ngoc and Vinh Dang to get married faster.

Evan fell in love with the Vietnamese girl, to the point of feeling that he had “never experienced such a strong love between a man and a woman as with Tien”. After four months, Evan confessed dozens of times, Thuy Tien still refused. She has feelings for him but thinks this virtual relationship will not work.

On June 13, Evan once again confessed his heart. At first he spoke Vietnamese, then switched to English. When words could no longer express his feelings, Evan cried. Tien accepted because he found the guy too sincere.

Since falling in love, Evan has been looking for ways to fly to Vietnam even though commercial flights have stopped. He found the opportunity to enter the country as a “foreign expert”, when he applied for a technical job in a company in Saigon. After five times seven bookings, in November 2020, he found a flight.

On the day Evan left for Vietnam, his mother cried because she loved her son away for the first time, and his father worriedly said “There are no women in America”. But he still set out without hesitation.

To this day, the American guy has been in Vietnam for more than a year. He is married to Tien and now lives with his wife’s family in Binh Thanh district. Outside of work, he and Tien together take care of abandoned dogs and cats, cook rice for the poor. The young man also enjoyed gardening with his father-in-law and telling jokes to his mother-in-law.

Living in Saigon, 28-year-old Nguyen Thanh Ngoc was introduced by relatives to a 26-year-old girl named Hang Thi Su from Phong Tho district, Lai Chau province. Thanh Ngoc is a photographer and chef working in tourist areas, and Su is a famous tourist “boss” in Sin Suoi Ho village. After a year of acquaintance, they turned from strangers into friends, then into lovers.

On the occasion of April 30 this year, Ngoc went to Sin Suoi Ho to visit his girlfriend, but the epidemic broke out so strongly that he could not return to Saigon. The days stuck in Lai Chau, being able to go to the fields, roof houses, eat with the villagers made the young man love life here.

In August, the couple collaborated with some people to make a movie “Say no to drugs“, recreated a dark period in Sin Suoi Ho and won the second prize of the contest Youth with socio-cultural problems of Lai Chau province.

After the movie, the Saigon boy became more and more attached to this land and Su. He decided to stay, open a photography service, run a cafe and homestay business with his girlfriend.

At the end of September, the couple’s dreamlike wedding took place next to the orchids, clouds hovering halfway up the hill. Their wedding photos “occupy waves” throughout the Northwest tourism forums and were named “the most beautiful highland wedding of the year”.

Also visiting his girlfriend named Huyen Trang in May, Vinh Dang, a native of Ben Tre, was stuck at the Perfume Pagoda, My Duc district, Hanoi. The artist and businessman today and his lover’s father work in the garden, mow the lawn, herd goats.

Having a talent in cooking, Dang shows off his talent in cooking from Western to Vietnamese dishes, especially Western dishes such as fish sauce hot pot, braised braised noodles, banana salad… making everyone in Trang’s family fall in love. “Those are peaceful days that have never been experienced before, making me feel like I’m living in a resort for Japanese seniors,” the 31-year-old said.

During the days of “stay in one place”, the guy also combined with his girlfriend to run the beauty salon and real estate business.

Love is ripe, Dang and Trang decided to hold a wedding in the Perfume Pagoda area, despite the Covid-19 situation and the groom’s family could not attend.

Dang’s mother sent out 20 billion as a bride’s bride. The bride’s family also gave their two children a house of 16 billion, along with many other valuable gifts.

Two months after the wedding, Vinh Dang said that he and his wife are still focusing on business in Hanoi. He hopes the epidemic will soon be controlled, life will return to normal, grandparents can meet and a complete wedding in his hometown will take place.