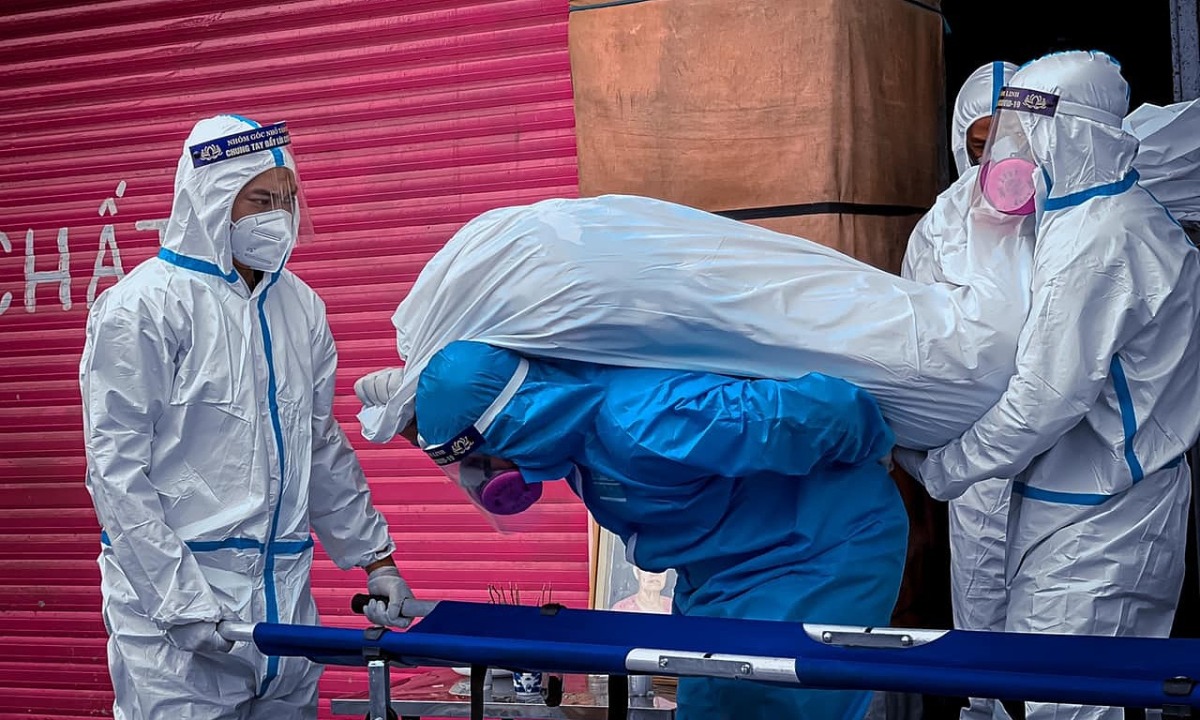 Five people urgently put on protective clothing, masks, and goggles, then got into a car and ran straight to a small alley on Tran Van Khanh Street, Tan Thuan Dong Ward, District 7, where a person recently died from Covid. -19.

Burial is not the profession of Truong Van Thinh, 30 years old, in District 7. He was originally a freelance business, but when the epidemic broke out, Thinh’s work was delayed. Unable to bear to sit still when the city was “severely ill”, Thinh asked to join Tran Long’s volunteer group that has been active since 2014 in the same district.

“Our group has nearly 100 people, of which the burial team is about 20 people, most of them are new people who have just registered to participate in the epidemic,” said Mr. Tran Long, 41 years old.

Initially, both Thai Ha and Truong Van Thinh participated in running an ambulance, providing oxygen for F0. In August, when the number of deaths from Covid-19 increased, peaking on August 22, there were 340 deaths, the city’s funeral service was strained, two people were transferred to a post-mortem team. “My group is full of horizontal people, who are office workers, teachers, bank employees, even company directors. If we see people in difficulty, we will help,” Ha shared.

Thai Ha’s daily job is to receive information from the people and request support from the Department of Health or the Military Commands of the districts. When required, she assigns vehicles, assigning tasks to each team. When the car set off, Ha stayed to process death certificates, cold storage, register a schedule at the crematorium, and deliver the ashes to relatives. “There are peak days, the group has to be divided into three teams, supporting more than 30 shifts,” she said.

From the day she was the captain of the post-war team, Thai Ha often had sleepless nights due to witnessing many difficult circumstances. “There are children who are only 1-2 years old, who do not understand what happens and have lost their father and mother,” Ha confided. The female lecturer admitted that at first she was quite worried because she often had to be in close contact with F0s, and even once tried to change jobs.

“But think, if I stay at home, who will do those things, so I will do it again,” Ha said.

Every day, Truong Van Thinh drives to the street from 9am, lasting until midnight. According to the guidance of the Ministry of Health, the body of a person infected with Covid-19 must be buried as soon as possible, then cremated or buried within 24 hours of death. Therefore, the after-care teams are always in the spirit of “called starting”, regardless of day and night, rain or shine.

More than a month of doing this, Thinh remembers the case of a pregnant woman who lost her husband in District 7 on August 28. “That day, when I arrived, I saw a young pregnant woman sitting in a daze, her eyes red. The deceased husband was lying in a hammock,” Thinh said. He helped the woman sit down, and then joined the team members to carry out the procedures for the deceased. When the husband’s body was taken to the car to be cremated, the wife’s sister stood from afar, staring blankly.

Mr. Kim Kien, 30 years old, living in Binh Chanh said that his mother died at the hospital on August 7. He messaged Ha and Thinh’s group for support and received a response within the night.

“At that time, I was heartbroken, everyone in the group had to take care of my mother’s funeral, serve as a posterity for my mother, and comfort and encourage me. During this pandemic, if it weren’t for such volunteer groups, I wouldn’t know. What should I do?” Kien said.

Mr. Thai Nguyen Hue Luan, an employee of the district 4 health station, said that since the beginning of the epidemic season, Mr. Long’s team has supported the unit a lot. “When they need a car to take F0 to the emergency, or to bury a Covid victim, they are always present and don’t mind difficulties,” said Luan.

In July, the agency let some employees work from home. The school experienced sleepless nights. The youth of a man in his twenties urged him to do something, so he opened his laptop to register to fight the epidemic. On August 18, Truong was accepted into a volunteer team in District 10, driving an ambulance and assisting the funeral team.

“I did things that I never thought I would do before,” Truong said. Initially, Truong hid his family about going to take care of the afterlife for the person who died because of Covid, only saying that he was driving to carry the patient. After watching a livestream online, my parents knew but “did not object, just told to protect carefully”.

The school said that at first, it was only outside to support things such as helping disinfect, giving ropes, giving body bags. Now he is able to do the burial tasks such as dressing the deceased or moving to the cremation site. “We want to see them off to the end of the road in the most neat, thorough and tidy way possible,” Truong said.

The trips of Thinh, Ha or Truong gradually became less frequent. Some of the team members have returned to their families after many months. Some people are starting to return to their daily routine. But there are also people who continue to stay and support the needy and patients, because they have promised “when peace will return”.

“Our team has supported the burial of about 300 people. Currently, the group continues to help families whose loved ones have passed away but cannot afford to pay for their own burial,” said captain Tran Long. .

Quang Truong plans to return to his job as a banker when the city eases the lockdown. “I was born and raised in Saigon, so I’ve never been away from home for so long. And never has the love for family, love for fellow human beings and respect for life have risen as strongly as now.” , the boy confided.