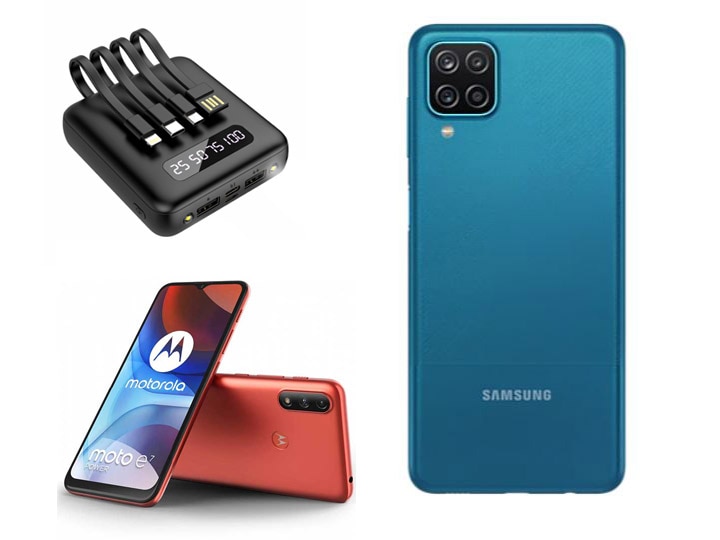 Last week saw some big launches in the tech sector in India. A new model of budget smartphone to power bank was introduced. A power bank that can charge up to four different lug devices simultaneously. In addition, smartphones from Motorola and Samsung also entered India. Let’s know about some big big news of the tech sector this week.

Entry of Samsung Galaxy A12
Samsung has launched its most awaited phone Galaxy A12 in India. Samsung Galaxy A12’s 4GB RAM + 64GB internal storage variant has been priced at Rs 12,999. At the same time, its 4GB RAM + 128GB internal storage variant costs Rs 13,999. The new Galaxy A12 has a 6.5-inch TFT display, which has a resolution of 720×1,600 pixels. This phone works on One UI Core 2.5 based on Android 10. This octa-core processor is equipped with the MediaTek Helio P35 chipset. 128 GB storage will be available in the phone, which can also be increased with the help of MicroSD card. The new Galaxy A12 features a quad rear camera setup, which includes a 48-megapixel primary sensor with f / 2.0 lens, a 5-megapixel ultra-wide-angle lens with f / 2.2 lens, a 2- with f / 2.4 aperture. A 2-megapixel depth sensor camera with megapixel macro shooter and F / 2.4 aperture has been given. The Galaxy A12 comes with an 8-megapixel shooter, which has an F / 2.2 aperture.

Jio Saavn and Zee5 connected to Fire-Boltt
India-based wearable and audio technology brand Fire-Bolt has registered another milestone with the success of its Global First Concept Bolt Play app. This app is a comprehensive entertainment, fitness and reward eco system in itself. In a short time and a short period, it has crossed the one million user mark. The special thing is that major entertainment platforms such as Jio Saavn and Zee5 have also joined the Fire-Bolt app. Bolt Play App’s Reward Partners include a number of leading global companies in the world of consumer goods, fitness, fashion and entertainment. Whenever users engage with activities like listening to music, watching movies, uploading videos or playing games on the app.

10000mAh special power bank
While you will get to see many options in the Powerbank market, Allen has launched a special Powerbank this time that can charge four devices simultaneously. India’s leading gadget accessory and consumer electronics brand U&I has launched its new ‘Robot’ named PowerBank, priced at Rs 2,799. This power bank is 10000mAh battery capacity and has an LED display. Apart from this, it is made from superior quality alloy plastic cell. According to the company, this PowerBank has an inbuilt intelligent safety system that protects the device from overcharging, overheating and short circuits. Apart from this, this power bank has also been claimed to be shockproof. This device comes with an in-built 4 charging cable Type C, Micro, V8 and lighting connector.

Buy Samsung Galaxy F62 for the first time in the cell, these great offers are available on the phone