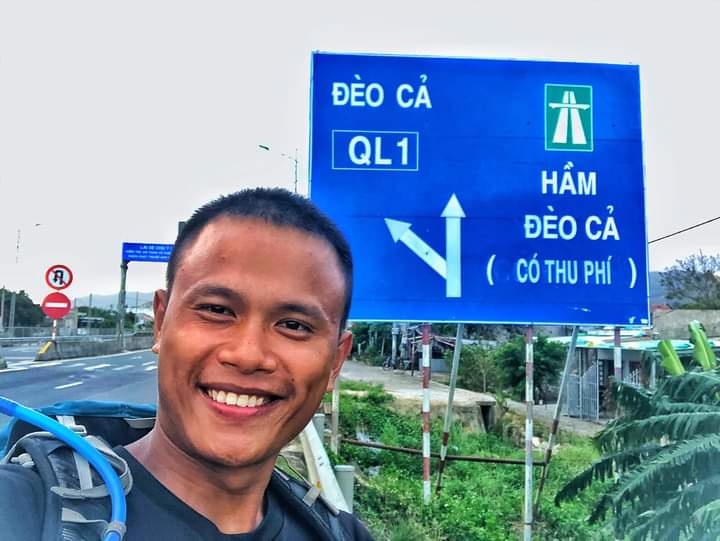 The planned trip from Ca Mau cape to Lung Cu by Duy Hoan in February was interrupted due to Covid-19 resumed from October 21.

“If you walk with money, everyone can go, if you’re hungry, buy food, get tired of renting a hotel to sleep. But I think if I can work together and eat the daily dishes of the local people on my journey. This is a great experience, ”said Vu Duy Hoan, 20 years old, a student of Tourism, Hai Phong University, about a” zero dong trip “along the length of his country.

The man from Vu Ban, Nam Dinh added that at first he just wanted to go to challenge himself, “expressing his youthful spirit to dare to think and dare to do” although he still has a stable income from mobile phone business. moving.

Hoan departed from Ca Mau cape – the southernmost point of the country at the end of February, but when the Covid-19 translation broke out, he stopped his trip to Nga Bay city, Hau Giang. On October 21, Hoan continued his journey, moving along Highway 1A with a distance of more than 2,300 km, and is expected to travel in about 100 days.

The original plan was to “go for fun” but along the way, the young student, who has witnessed many difficult circumstances, decided to set up a YouTube channel to share his experiences along the way, at the same time, to spend the money earned. from there to help the poor.

“Now, my journey has more motivation to help the community”, Hoan said while resting at the middle of Deo Ca on the last day of November.

“Walking 0 VND”, Hoan’s luggage is also light and compact, with only the essential items are two sets of clothes, glasses, hats, raincoats, sticks, water bottles, cell phone charger. Every day, he gets up at 3:30 a.m. to edit a video posted on his channel and then starts out at 6 o’clock. In the evening, he stopped by a certain homestay to ask for a stay.

“I used to help a brother participate in many tours, once conquered the 42 km marathon, so I do not worry about health problems. The first memorable memory of the trip was the second day moving to the city. Ca Mau, who has walked for more than 30 km all day, is nearly 9 pm but has not yet asked for a motel, hungry, ”said Hoan.

That day, from 5pm, the young man started to stop at a people’s house asking for an overnight stay but was repeatedly denied. The road is deserted, the two sides are only rows of nipa trees, rice fields, shrimp square, a few kilometers away will have a new house. Near 9 o’clock at night, tired and helpless, Hoan thought perhaps his trip would have to stop here. “At that moment, there was a question in my mind: Why do you get into a ‘game’ like this?”, He said. But when standing in the middle of the long bridge, caught the wind in the cool face, saw the light flickering in the distance, the young man thought: “Now no one can help, except himself. marry me, have to keep going “.

After walking a few more kilometers, Hoan was allowed to sleep by a roadside restaurant owner. But at the same time, he also received a sentence “scolded capital” from the woman: “How hard are you going?”. Not in time to explain, the ‘stranger’ quickly walked into the kitchen, bringing out a tray of rice with all the delicious dishes in the house.

The next day, due to unfamiliarity, his whole body was damp, his feet ached, the young man could not go on, so he stayed to help the owner to carry water for the guest and rest.

Mr. Vu Dinh Mui, 55 years old, Hoan’s father said: “I often teach my children that I not only study in school but also have to study in many other fields. Walking through Vietnam is also a learning process. As a child, I let him decide his own job. The family is always watching and accompanying me, not forbidding “.

On the journey, one day of hunger, Hoan was treated to a bowl of cold rice with a salty dried fish by a western farmer. “When I put it in my mouth, I wrinkled my face, but the more I chew, I feel sweet, the sweetness I have never tasted,” the boy recalls. The next day, he got on the boat and joined the farmer to experience releasing fish nets in the river.

Coming to Binh Thuan, Ninh Thuan, for the first time in his life, a young man in Nam Dinh felt the “burning skin” of Central Vietnam, when he had to drink more than 6 liters of water a day. There are only yellow meadows, sand hills instead of rice fields like other countryside. Please go to the toilets of people along the road, Hoan was pointed out by the owner of the sand hill behind the house because of economic difficulties, they could not build toilets. Although it was hard work, but the owner of the restaurant still allowed him to stay, the next morning she woke up early and cooked rice and ball tightly with some dried fish for the boy to leave.

Talking with children about 15, 16 years old, ethnic Cham here, the young man knows that the children have all quit school and are preparing to go to Saigon to find work. “My channel was enabled to make money last month. After the trip, I will come back to help them,” he said.

Coming to Khanh Hoa, a young man of North origin was invited for the first time to eat a young mango dipped in fish sauce instead of salt. Fishermen taught to scuba dive and touched the coral reefs, small fish swimming at the bottom.

“Through each province, I have many different experiences about the cuisine and daily life of the people. There are many brothers and sisters who find themselves on Facebook, knowing that they are going to be close to where they live, so they take the initiative to go to the street. Highway wait, give me a bag of fruit, water bottle … “, Hoan boasted.

Having just been on the road for more than a month, the young man has experienced many different jobs when repaying the local people along the way for allowing him to sleep and eat. Once he helped sell water, sold grilled meat noodles, another day he was invited by the owner to go fishing, scuba diving, making rice paper or harvesting pineapples in the midday sun with farmers …

On the morning of November 29, Hoan started to leave Tuy An city, Phu Yen to continue his journey to Ha Giang, which still has more than 1,500 km. Here, the boy begins to feel the cold and early morning rains. Putting his walking shoes in his backpack, Hoan took the shoes given by a resident the day before, and started walking in a raincoat.

“The weather is a bit difficult but I don’t think it will stop. This trip is like a slow-motion movie, there are things I cannot feel if I just go too fast,” the young man said amid the sound of sticks. the beat is still on the road.

From time to time, Hoan stopped to look at a flower he didn’t know his name on in front of a house.