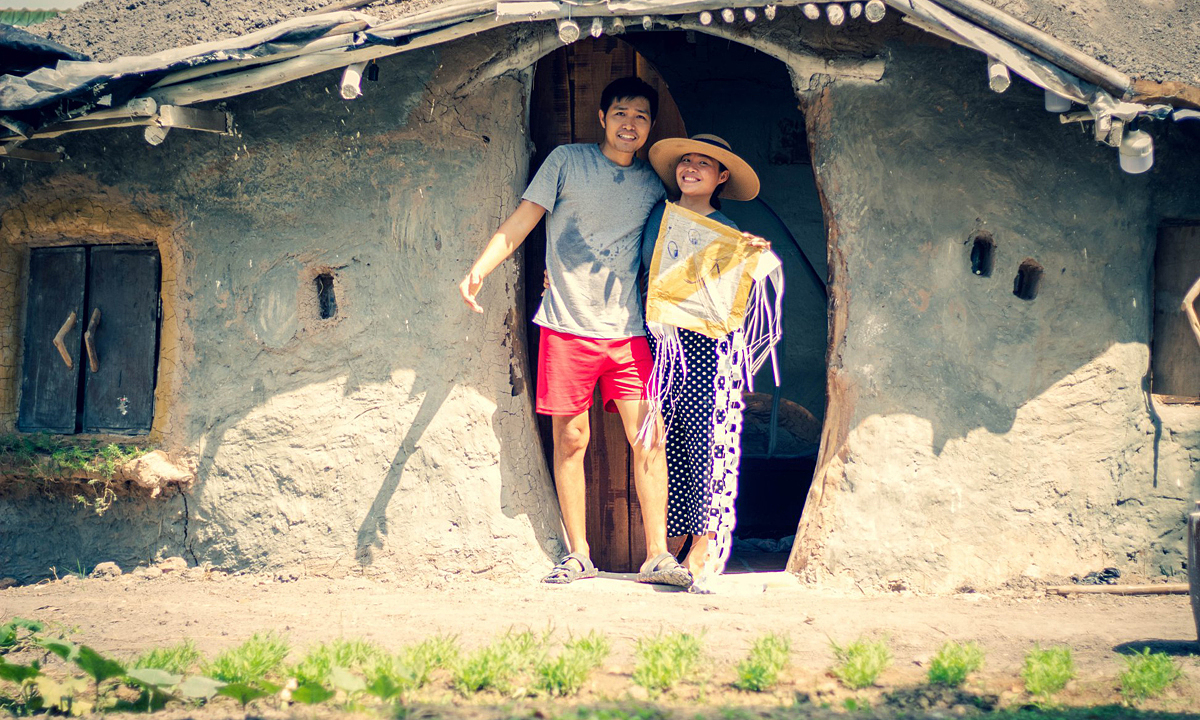 Long AnTo realize the dream of a gardener, Bao Tan and his wife decided to build an environmentally friendly house with thatched roof, with a total cost of 50 million VND.

Their house is located on a plot of 2,000 square meters, in a remote, vehicle-free area in Duc Hoa district. From 2019 until now, every day, Bao Tan and Vo Thuy My have been working together in the garden, growing vegetables, teaching English and repairing the house.

Bao Tan graduated from Ho Chi Minh City University of Architecture, and his wife studied Finance at Long An University. When he was a student wandering around Saigon working part-time, in Tan he was always anxious about his peaceful childhood with his grandparents, day by day knitting bamboo and baskets, bringing them to the market on weekends to sell. After graduating from school, Tan worked as a construction supervisor, traveling around the East and West, but he did not find joy. Leaving only useless drinking sessions after work. “This is not the life I want,” he said.

Once, Tan watched a video of a Thai boy who gave up his life in Bangkok and returned to his hometown to build a house, garden and live a comfortable life thanks to his good English. That story breaks the myth that “only Saigon has a chance”. “I started dreaming about life in the countryside, with a small garden, having foreign friends visit and share with them about Vietnam,” Bao Tan said.

Tan started to self-study English and knowledge of e-commerce. He also anticipated “culture shock” because of the dullness of country life, so he taught himself survival skills, forged the habit of reading books and relaxing alone. For example, to install an automatic irrigation system for a vegetable garden, he spent three hours listening to instructions on irrigation system models and necessary supplies.

In just two years, Tran Bao Tan has become fluent in English. In 2015, Tan quit his job and switched to selling yam and teaching English.

The young man’s idea of ​​​​living a rural life had more support from Thuy My, after the two’s wedding in 2016. At that time, both were afraid of being ridiculed for “wasting money to go to university to return to the dirt”. should save up to buy a piece of land in a place few people know.

But the couple’s plan was broken after Tan once read the sentence: “Make use of what you have to do what you want”. He remembers the abandoned 2,000 m2 land of his grandparents and childhood memories. The boy discussed with his wife and received “instant” consent.

In August 2019, Tan and My left the city to return to their hometown. They started their new life by realizing the idea of ​​building a house.

The land in each region is different. Tan has to try to choose black soil and clay, which have the best bearing capacity. Because the house does not have a skeleton, to ensure safety every day, Tan only makes a thin layer of about 3 cm, waits for it to dry before making another layer. When the house was formed, to protect the earthen wall, Tan used sand and lime to plaster many thin layers on the wall, the last layer used 100% slaked lime.

After four months, the house was basically completed just before Tet 2020. “The house that day was still rundown, someone just looked at the outside and said the birdhouse, but it’s the result of the couple’s work, so the feeling is still great. “, Tan said.

The following year, they decided to upgrade the house to separate sleeping and working spaces. At this time, they asked two more friends to help. Because of the extra attic, Tan built four cement columns to make the house more secure.

The lower part has an area of ​​49 m2 is a space to relax, work, toilet, wall 30 cm thick. The upper part is a 9-square-meter sleeping loft. Tan also built a separate earthen kitchen next to the main house, making cabinets and tables to his wife’s liking.

In the middle of his house, there is a wooden swing, next to it is an earthen sofa located next to a window modeled on a car window, looking out into the garden. This is the space the couple likes best. Because they lived simply, it was just an empty house with four pure white walls. The project will be completed before Tet 2021.

“This time, friends and relatives came to visit very interested. Neighbors who came also complimented that they didn’t want to go out because it was so cool,” the couple shared. 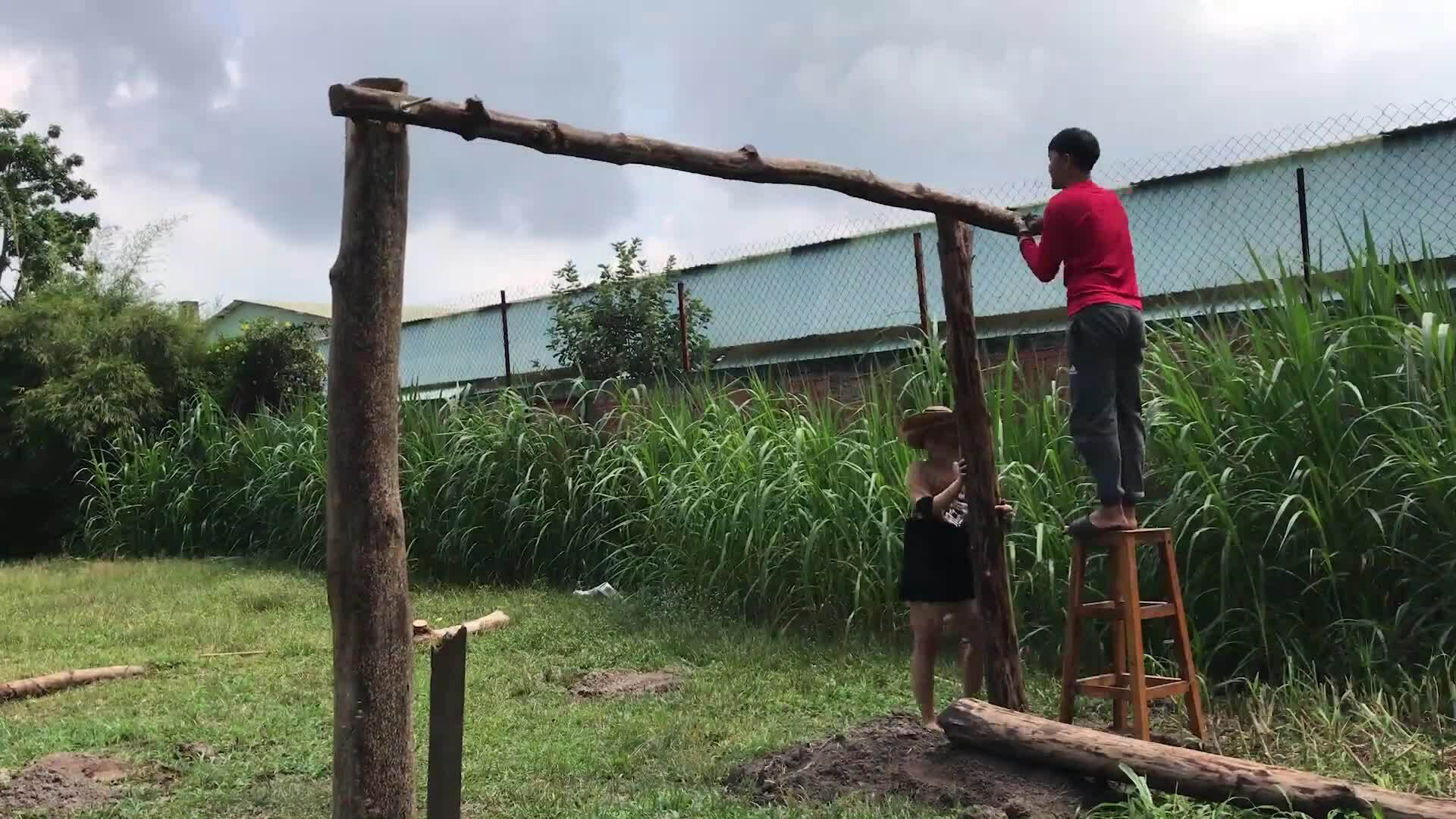 Two years of building a house with hundreds of stages, Tan had to tinker and experiment by himself. For example, when it comes to waterproofing, he takes rubber granules and then sweeps it on the wall. After finding this difficult, he switched to regular vegetable oil, or soap, which still had the same effect. When applying oil on the lime wall, it will absorb the oil and keep it inside, making it impossible for water to penetrate.

The advantage of the house is that it can circulate air through the wall, creating a feeling of warmth when it is cold and cool when it is hot. Lime can disinfect and prevent harmful mold, creating a healthy living environment in the house. Plastered walls will initially be soft, but over time the slaked lime combines with CO2 in the air to form limestone, which is very hard and durable.

The total cost of building a house is only VND 50 million, most of which is spent on buying tools. These are necessary items for life in the countryside in the future. Through the process of building a house, the couple wishes to be able to share their experiences with those who are passionate about building a simple, environmentally friendly home at a low cost.

“I realized that financial freedom is not buying what you want without looking at the price, but not depending on your life on money,” Bao Tan said. Nowadays, buying a sofa can take a few months’ salary, building a house takes 10 years of fasting. While the old grandfather Tan took a week to build the house, it took a day to make the bed. Following him, he made everything in the house by himself.

“Looking back on the journey back home, it was arduous, but in fact, we built it all by ourselves,” said My. For many years, they were worried about their parents being sad, in fact when Tan shared his intentions, they just said: “The children have grown up, knowing how to take care of themselves, their parents are proud”. The barrier from the village is not even worth mentioning, they are just joking without malice.

Many people have asked Tan and My “you’re still young, why are you leaving town to go home so early?”. The couple did not think early. If they were brave enough, they would have returned since their marriage, even earlier than when they were meant to in 2012.

* Photo of the process of making the house: