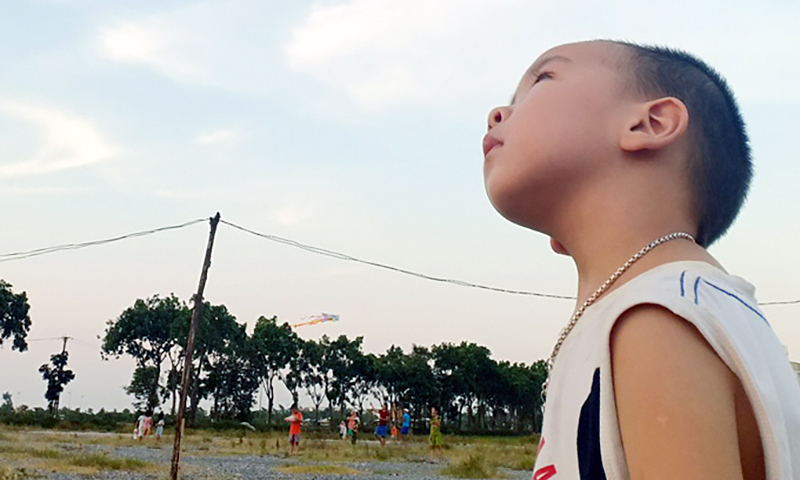 Seeing that his son was always happy, he banged his head on the ground. When he got angry, he hit the pillar. Giang A Pao didn’t know what was wrong and had to take him to the National Children’s Hospital.

In March 2021, a 33-year-old father in Co Linh commune, Pac Nam district, Bac Kan first heard the word autism. “At that time, I could explain why my son was still a stranger to me,” said Mr. Pao.

The container truck caught fire on the road, fortunately stopped in time when it lightly touched the two-year-old boy who had just rushed out from the side of the road. That was just one of countless dangerous times that Cam Thi Huyen, 32 years old, in It Ong town, Muong La district, Son La province, thought she was going to die over and over again because of her son’s unpredictable actions.

Where the Thai ethnic group is the majority, the fact that a child is slow to speak, slow to speak like Truong is not noticed by many people. At the age of two, the baby was just starting to walk, the old man in the encouraging version said “it will talk sooner or later”, but instinct tells the mother that the child is unusual. When Truong was 31 months old, Ms. Huyen took the baby to Hanoi for examination.

“That’s when I found out about autism,” said the 32-year-old woman. At that time, she was extremely confused “I don’t know what syndrome it is, can it be cured and what to do to help my child”.

In Plei Kan town, Ngoc Hoi district, Kon Tum province, 18 km from the border junction with Laos and Cambodia, Tran Thi Hoan could not explain why her granddaughter was so naughty. From the moment he learned to crawl, Phuoc threw bowls of chopsticks and broke barriers to find a way out. When he was old enough to walk, in a split second, he was gone. She said he didn’t listen, shouting didn’t work, when Phuoc was more than two years old, she took it to be tested and was determined to have autism.

Autism Spectrum Disorder (ASD) is a lifelong neurological disorder that usually manifests itself in the first three years of life, characterized by difficulties in social interaction, communication, and repetitive and narrow behaviors, interests and activities. Autism is a broad spectrum that ranges from very severe to very mild.

In the case of Truong and Huy, the doctor determined that if they were actively intervened, they would improve somewhat. Baby Phuoc is average, with timely and long-term intervention, he can control inappropriate behaviors to focus. Many other children also have strange behaviors such as just liking the fan, being afraid of the sound of pouring water, and often putting their hands in holes or banging their heads against the wall when they are worried.

“Children with autism have these characteristics because their brains develop differently from those of normal children,” said special education master Ha Thi Nhu Quynh (Hanoi).

According to the Centers for Disease Control and Prevention, between 2 and 7% of children worldwide have ASD, and boys are four times more likely to get it than girls. In Vietnam, there are no official data on children with ASD, but according to the General Statistics Office in 2019, our country has 6.2 million people with disabilities aged 2 and over (accounting for about 6.5% of the population), in which That’s about a million people with autism. A statistics of the education sector in 2020 shows that autism accounts for 30% of children with disabilities in schools.

“These numbers do not reflect reality because many children are undiagnosed or do not go to school,” said Pham Thi Kim Tam, president of the Vietnam Autism Network and administrator of a group for women. A young parent with autism with 36,000 members, commented.

At the National Children’s Hospital every year, the number of children coming for examination and treatment for autism increases by 10-20%. Of the approximately 22,000 children who visit a psychiatric specialist at the hospital each year, one-third are assessed as autistic. The Department of Psychiatry has classes for this group of children, each year receiving intervention about 400 children, mainly in relatively severe cases, or children in remote areas without centers.

According to Master Quynh, many parents, especially in mountainous areas, are slow to recognize their children’s symptoms. And even if your baby has symptoms, it is difficult to make an accurate diagnosis due to the lack of doctors or specialists with enough qualifications to make a diagnosis. Schools and the quality of specialized teachers are also a big issue. Many non-specialist teachers, even those without expertise, are recruited to teach children with autism.

A family in Soc Son, Hanoi said that their twins suffered from two different disorders but received the same intervention by a district center with the same method and remained unchanged for 9 months. “This is a waste of our children’s golden time and our money,” shared mother.

In Kon Tum, Mrs. Hoan could not find any school near her home for her son to study. After more than half a year of thinking, her mother and daughter decided to pack up and go to Hanoi for Phuoc to study at a center in Dong Anh. After 10 months, the boy took the initiative to say, his communication skills were good and he was able to “graduate”, but Hoan’s mother and daughter asked the center to continue to support the child in the pre-primary stage and other skills. . “The money accumulated over the years my daughter worked as a worker has been spent on going to the capital to send her to school, but we think it’s worth it,” Ms. Hoan said.

In contrast, Truong’s parents admitted to having missed the “golden period” of their child. From the time her child was diagnosed with autism until before the outbreak in May 2021, Ms. Huyen sent her child to four schools. In which, twice, she sent her children to study in Son La city, 50 km from home. When I was away, my son was often sick, did not make progress, and my mother did not make money, so I had to take a break. Two other times, she took her children to Hanoi, living frugally on her husband’s salary.

In addition to parents’ ignorance, social prejudices also prevent autistic children’s opportunities to integrate. There are still popular misconceptions such as: children with autism are rich children, geniuses, autism is caused by watching electronic devices a lot or can cure autism…

“Many parents reflect that when their child is autistic, people around say ‘parents who behave dishonestly, their children will suffer like this’. This causes severe trauma to parents and leads to hiding their children at home or not confident to let her children go out,” Tam said.

This experience, Huyen understands better than anyone. After returning from school for many days, he was tired so he beat his mother on the bus. Even her children did not understand, so she could only hug and pat her. Many times the boy suffered some invisible impact, kept running into the street despite the danger, his mother could only sit in the middle of the road to comfort him. Later, she prepared a cloth rope, before getting off the car, she would tie the mother’s and child’s hands together.

The strange actions and gestures of the mother and daughter cause curiosity to the people around them. Some people do not know, they say their children are bad, mothers do not know how to teach. Some people know that a child has autism and say: “Give him the phone again”…

Giang A Pao also guessed that his son’s illness was one of the reasons why he was abandoned by his wife. During his time as a construction worker in Algeria (North Africa), his wife often sent videos of Huy banging his head against the wall, or having a seizure, his forehead covered with new and old wounds. Then news that his children were neglected, causing him to return home. A month later, he and his wife went to court, and since then, Pao has raised three children.

Unable to bear to leave Huy alone, Pao found a way for his son to study at the Education Center for Disabled Children in Bac Kan Province. The first year he applied to work as a security guard at the center to take care of his children. This year, he was assured to leave his children at the center, while I went out to work. However, during the epidemic breaks, he had to take his children back to his hometown, Pao was forced to take a break from work because Huy was still unable to walk, while his village was on rolling dirt roads.

“Each autistic child is in a different world and even the parents are in another world,” said Tam, who also has a 20-year-old autistic child. Mrs. Tam hopes that on the difficult journey, parents will not be discouraged or give up halfway when they see that their child is not yet or making slow progress. Early and continuing education is by far the best way to help children with autism develop, and in many cases may need little support and even become independent in adulthood.

In August 2020, after more than three years of intervention, Phuoc was able to go home to attend an inclusive kindergarten. Currently, he is in grade 1, grasping knowledge well, even faster than some friends. “But the autism disorder doesn’t go away. When I’m angry, I growl, resist, can’t speak long sentences and have poor social skills compared to friends,” Ms. Hoan shared.

After nearly a year at home because the school has not yet opened, Ms. Huyen is very impatient for her children to go back to school. If before, she and her husband had conflicts over letting their children go, but now they realize that without massage, therapy and education, the child will become worse.

“Sometimes I wish if there was no translation, if only the family had money to send their children to school regularly, maybe by now they can read and speak a few words,” she said.

With the goal of igniting the faith of children with cancer, the Hope Foundation cooperates with the Mr. Sun program to launch the Sun of Hope program. From the beginning of 2022, the Fund expands its audience to care for autistic, orphan, disabled children… One more of your cooperation is another ray of light to the future generations of the country. Please see information about the program here.