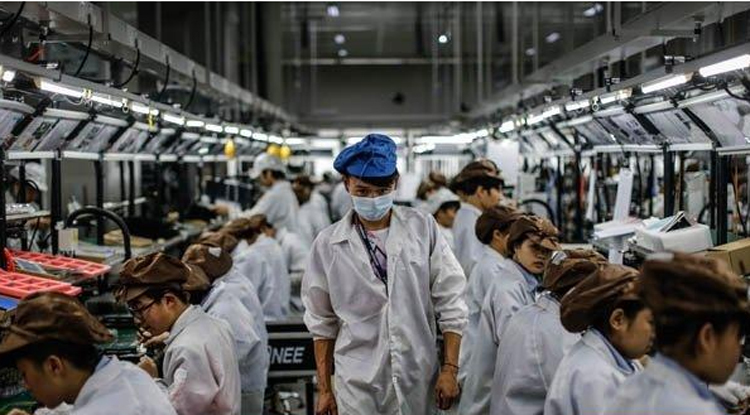 ChinaA An decided to quit her job because she couldn’t stand the factory’s regulations: She was only allowed to go to the bathroom once in the morning and once in the afternoon.

Every day, workers have to wait in long lines to go to the bathroom during the break between shifts. When the time is up, the toilet is immediately locked. “Once, I witnessed a female worker crying because she couldn’t make it in time and had to clean on the spot,” A An said.

“Either you have to suffer, or find another job.” After many years of working, A An was paralyzed by the foreman’s statement.

Truong Cuong is the foreman of a mold factory in Guangzhou. To combat lazy workers, the factory has issued an order “forbidden to go to the bathroom outside of fixed hours” from 8-9 am and 14-14:30 pm. Violators will be punished.

Truong said the regulation is intended to prevent many people from going to the restroom to smoke and chat. The security guard went to the toilet many times to catch the violating worker.

Liang Wei is an employee of a hardware and electrical equipment factory in Huangjiang Town, Dongguan City, Guangdong Province. Drinking water became one of the scariest things for this man. “The factory has a regulation that the total time to go to the bathroom of employees a month should not exceed 400 minutes. For every one minute exceeding, there will be a fine of one yuan.” Luong said.

The factory where Luong works has 300 workers. In front of the toilet door on each floor, there is a supervisor with the task of measuring everyone’s toilet time, through a computer. Luong said, the supervisor at the toilet he frequents is very kind, because this person loosens the rules, allowing “pee for 5 minutes and defecation for 10 minutes”, after which he is fined.

Tieu Tu, a worker who has just been recruited into a factory in Bao’an district, Shenzhen city, quit her job on the first day because she heard former workers talking about “urinary cards”. “A team has 20 people and only two permits to go outside to go to the bathroom. This is called a pee card,” she said. Workers who want to go to the toilet must register in advance. On a 10-person production line, if one person gleans, there must be a replacement before being allowed to leave.

Also in this factory, every time workers go to the toilet, workers will be deducted 6 yuan for toilet paper and 2 yuan per day for the staff who look after the toilets. Not only that, the factory will deduct money based on the number of times the employee goes to the toilet, if it exceeds the regulations.

Controlling workers’ toileting time in China has long been an important part of factory management. The forced toilet time of workers is turned into the production efficiency of the factory, into the profit of the company.

An said, she works two shifts a day. Only when she went to the bathroom, the discomfort caused by her illness made her think of herself as a human instead of a machine. A’an feels jealous of his old college graduates who are working in an office: “At least, they don’t have to deal with such things”.

However, there is a group of “white-collars” that A An mentioned that also has a bad situation. With the rapid growth rate, many programming companies in China are constantly recruiting personnel.

A large e-commerce company in Shanghai had 1,000 employees in 2017. The number of employees is now 6 times. At the headquarters, there are 1,000 people on each floor but only 8 toilets. You have to wait in line for 20 minutes each time. To solve the problem of employees going to the bathroom, these companies have a way that is considered more humane.

A short video studio in Shanghai has installed a toilet squatting timer that is accurate to the second. People outside can tell how long the person sitting inside has been squatting. The toilet of another large e-commerce company, manages toilet time with a slogan on the wall: Don’t bring cell phones into the toilet!

Meanwhile, to reduce staff’s loitering time, the company next door has applied a way to disconnect the internet from the toilet.

Under the pressure of racing against time, many people’s toilet skills have also become “skillful”.

Xiao Cao, who works in an e-commerce company, said: “I try to drink as little water as possible, so that the amount of waste water is minimal.” This man feels that his ability to hold urine has now improved markedly. He also tried to adjust his biological clock so that he would not defecate at noon as before, but “save” until the next morning while still at home. After several times of constipation, Tieu Cao succeeded.

For some workers, going to the bathroom is a meaningful act. Tieu Thanh, an employee of a super-large factory, always tries to stay half a minute every time she goes to the restroom. The small space gives him a sense of security, he can take the pressure off to get the spirit to continue working overtime.

As for Tieu Chau, a programmer at a short video company, the first thing she did after arriving at the company was to go to the restroom and sit quietly. During this short time, she will think about her work and give reasons for not quitting.

In the eyes of managers, toilets are also the enemy of work efficiency. From this perspective, white-collar workers in large enterprises are no different from assembly workers in factories. The most basic physiological need for human beings to go to the toilet is now becoming a big problem for hired workers in China.

“For bosses, the best thing is that the worker doesn’t have to go to the bathroom,” Tieu Chau said.