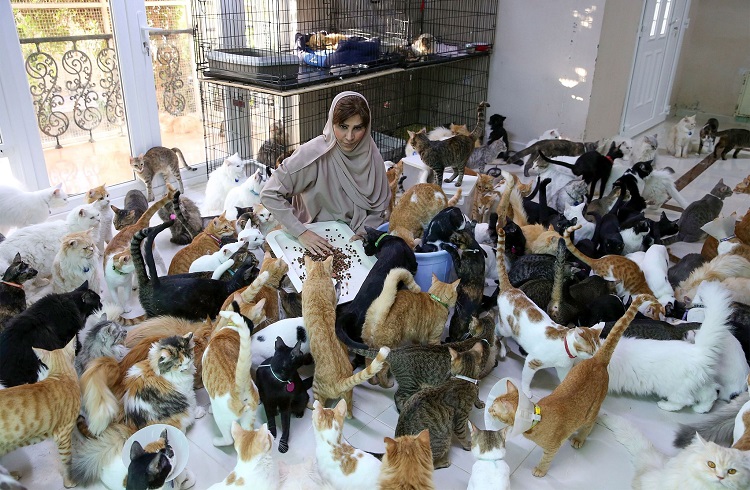 OmanIn 2011, Maryam al-Balushi suffered from severe depression, but thanks to the cat, she overcame. Since then, she devoted a special love to this animal.

It all started in 2008, when Maryam’s son, in Muscat, brought a small Persian cat as his pet. “Like many other mothers, I do not take care of him because I do not like animals and my son does not care or take care of it very much,” the woman said.

But as time passed, Maryam began to get along with the cat. She fed, bathed, wherever she went. When she went through a period of severe depression three years later, it was the cat that was once hated that helped her recover from the illness. Since then, the 51-year-old retired civil servant has become more sympathetic to cats, often taking them home. “I found that animals, especially dogs and cats, are more loyal than humans,” said the orphan woman from a young age.

Knowing Maryam specializes in feral dogs and cats, moving families often leave their pets at Maryam’s doorstep if they cannot bring them with them.

The woman has 500 cats and dogs

“God gives man a mind, a mind, and a tongue so that if sick, he will seek cure, if he is hungry, he asks for food, but the animal cannot speak, even in danger of his life. When the government provides human support services, the poor animals still do not pay attention, “the woman added, the reason for protecting stray dogs and cats.

As the animals grew, Maryam was denounced by neighbors to the authorities. In 2014, she decided to move out of her own house to raise more poor animals.

After work, Maryam rushed home to feed her pets. At first, she bought food and drinks with her own money. Without any financial aid, keeping a whole group of cats gradually becomes more expensive.

But then, Maryam posted pictures of her dogs and cats on social networks. Animal lovers willingly donate to feed them. Each month, the cost of buying food and taking care of 480 cats and 12 dogs is about 7,800 USD (about 180 million VND).

Her home is now full of barns, Maryam lets them go out to exercise and play alternately.

“My message is to treat animals with kindness. If you don’t give them at home, in the garden or near human vehicles, while they don’t want to be in the trash, then they know where to go, what to eat. Be merciful and you do it because of a moral obligation to everything on this planet, “Maryam said.

Intelligent Update (according to the odditycentral)