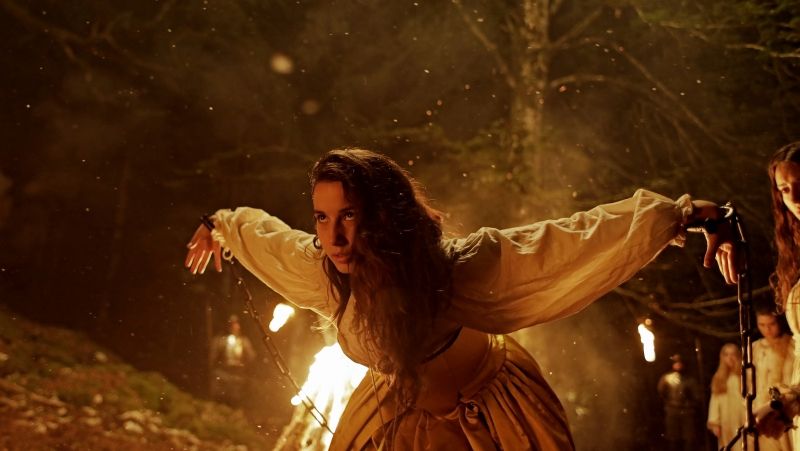 The witches of Akelarre **

Like wildfire, the pyres light up in the wake of Pierre de Rosteguy de Lancre. In this year 1609, this judge appointed commissioner by Henri IV for “Purge the country of all wizards and witches under the influence of demons” is responsible for accomplishing its mission in Labourd. Seventy-seven executions have already taken place.

In the village where Lancre and his troops disembark, the modus operandi is always the same: the soldiers arrest young girls and women, then the judge subjects them to the question until they confess their sabbaths with Satan to theakelarre, the Basque word for the place where witches meet for their rituals. In the village deserted by the men who left for long fishing campaigns, Ana, Katalin, Maria and other young villagers fall into the hands of Pierre de Lancre.

An Argentinian director fascinated by female resistance figures, Pablo Agüero remarked that in literature and in the cinema the discourse adopted on witches is most often that of the inquisitors, hence his desire to ” put ourselves in the shoes of women, to make the first witches film without witches. For production reasons, he shot in Castilian in the Spanish Basque Country, while events took place in Bayonne, Ustaritz, Saint-Pée, Ascain, Saint-Jean-de-Luz, Sare and Cambo. But for the rest, he documented himself to get as close as possible to the historical truth of this witch hunt.

Through his rhythmic staging and dialogues that seem contemporary while avoiding the pitfall of anachronism, the filmmaker manages to bring Ana and her friends close. If they don’t understand what crimes they are accused of, they get what the judge wants to hear. Their stories (which historians attest to the delirious proliferation) suspend the torture for a time. Rewarded by five Goyas, this empathetic and harsh film, not recommended for sensitive viewers, draws its formidable energy from these women led by Ana who try to take their destiny in hand through their Scheherazade of the Inquisition narrations. With the resumption of the figure of the witch by feminist movements, Pablo Agüero signs a historical film particularly in resonance with our time.