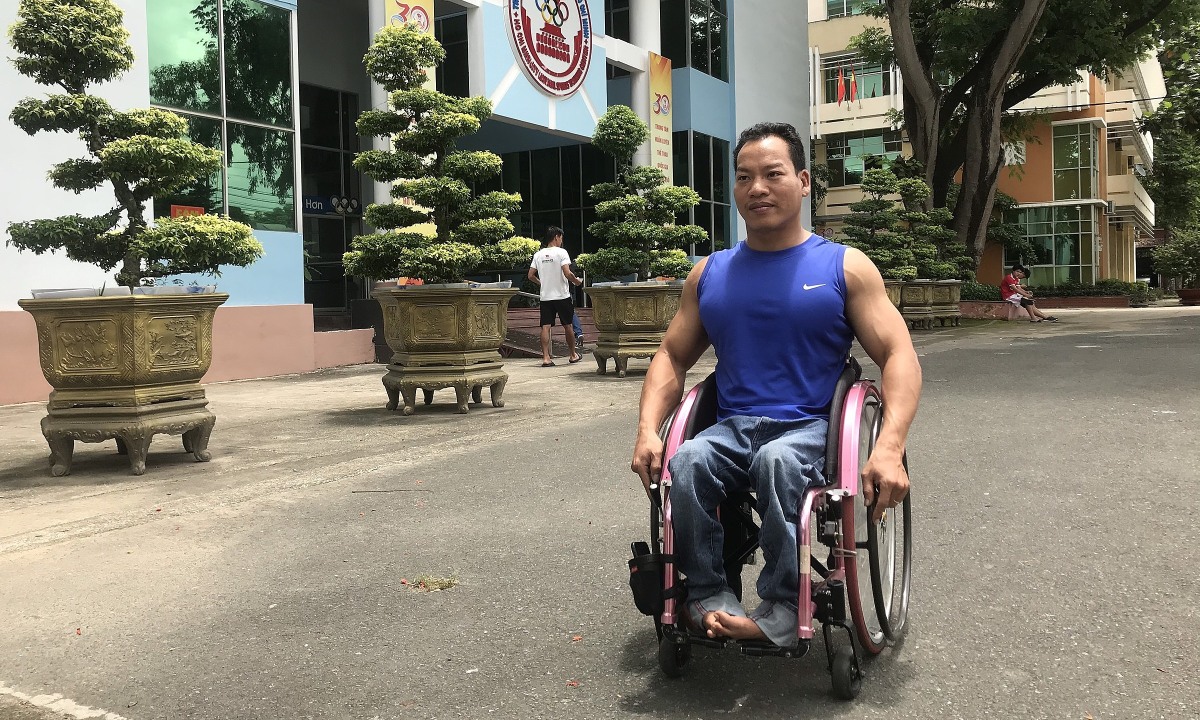 Ho Chi Minh CityHaving eaten at the temple, worked hard, the pain of injury could not discourage Le Van Cong to win high achievements for the country.

Looking at the dark, smiling man, moving in a wheelchair ardently practicing at the National Sports Training Center in Ho Chi Minh City, few people think that this is an athlete who has broken world records many times, won many medals in the state of injury. Although his shoulder still has persistent pain, Le Van Cong is still practicing hard and optimistically looking forward to the June competition in Korea and July in the framework of the ASEAN Para Games in Malaysia.

Last year, at the Tokyo 2020 Paralypic Games, participating in the men’s 49 kg weightlifting event, Cong won a silver medal in a state of shoulder injury that has not fully recovered. Before the tournament, he received treatment for 2 years.

“The time to practice before the Tokyo Paralympic was very difficult for me. The injury had not completely recovered, so I practiced lightly and was more or less affected by age,” Cong recalled. At the convention, he had to spray pain relievers before entering the competition with 8 other opponents.

Head coach Le Quang Thai, of the Vietnam disabled weightlifting team, once shared: “I have been with Mr. Cong since 2015. Cong’s energy and enthusiasm in sports are not only contagious. only me but all the young athletes in the region”.

Rich in sports achievements, Cong is also an example of overcoming adversity in life. As the second child in a poor family with 5 brothers in Ha Tinh, Cong suffered from atrophy of his legs from a young age because his mother contracted dengue fever while pregnant. Can only crawl with his hands, Cong was taken to school by his brother and younger siblings. In 2005, he left his family, went to Ho Chi Minh City to study electronic engineering with the desire to establish a career and win over fate.

Cong still remembers, when he entered the South, mother and daughter only had one million dong. Then his mother returned to his hometown, Cong lived alone in a strange city. He was given free school fees, facilitated to live in a dormitory for free. During the first three years of his arrival in Ho Chi Minh City, Cong lived on charity vegetarian rice from the temple.

Outside of school, Cong takes advantage of part-time jobs such as varnishing for a wood factory. Introduced to a career club for the disabled, he fell in love with weightlifting, the initial purpose of which was to exercise to maintain health. The time a day is arranged by Cong to rotate between study, part-time work and practice.

It was his determination to rise up in life as well as his gentleness that helped him find a life partner. During a visit to a friend’s house, Cong met Chu Thi Tam – the friend of his friend’s sister, 5 years younger than him. Although initially prevented by her family for fear that she would suffer when she loved someone with a disability, Tam was still determined to come to Cong because she believed in the voice of her heart.

“I always believe that Mr. Cong is a resilient person, energetic in life, always resolute in pursuing what he does, and has to be done,” commented Ms. Tam about her husband. In her eyes, Mr. Cong is an ideal husband, always trying to keep his relatives from having to worry.

When his first son (born in 2010) was only one year old, he was seriously injured and could not walk. The couple did not tell their family in the countryside, taking care of each other. He stayed at home to look after the children, her sister worked as a tailor, with a salary of several million a month, but the rent was 1.2 million but still encouraged each other to overcome. Then he hid his wife to practice again.

After that, he was injured many times and was still determined to practice but did not hide from his wife anymore. “When I knew that my husband was sick but still tried to go to the gym, I felt sorry, and sometimes advised him to stop practicing completely, but he still tried to prove to his wife and children that he was okay, it was okay,” said Tam.

Always thinking about taking care of his wife and children to have a stable life, besides sports, Cong manages to do many jobs, from repairing electronics to real estate brokerage and recently with friends to invest in growing clean agricultural products. in Cu Chi.

During the days of Covid-19 raging, right at the first harvests, Cong sent 2,000 “Red Queen” corns to athletes with disabilities who were practicing at the National Sports Training Center. Da Nang family. He also donated corn to orphans in Ho Chi Minh City to share with difficult situations during the epidemic. Before that, in November 2019, he auctioned the 2016 gold medal won on social networks to get money (125 million VND) to support the neighbor girl’s cancer treatment.

Cong’s story is also the highlight of the program “Connecting all love (VTV1) broadcast in April.

As a special guest and companion in the program’s broadcasts, Ms. Tran Uyen Phuong, Deputy General Director of Tan Hiep Phat Group said, Le Van Cong’s story is similar to the spirit of “nothing is impossible’ that the business pursues. “Working every day, without being hindered by barriers helps us achieve things that even we ourselves do not believe we can do. Every time we do those things, we create strength not only for ourselves but also for those around us,” Uyen shared.

“During this trip to Korea for Mr. Le Van Cong and the weightlifting team, we are very happy to join in to support and wish him and the whole team to keep up the good form and continue to bring back a lot of pride. proud for Vietnam,” added Ms. Tran Uyen Phuong.