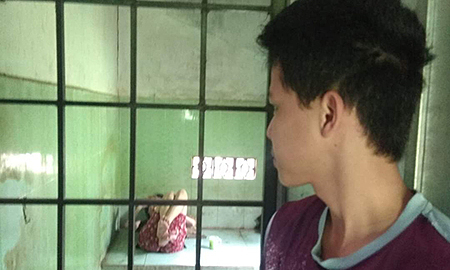 Quang NgaiAt the age of 6, a classmate asked Hieu: “Where’s your mother?”, he timidly pointed at the person chained under the kitchen porch. “Crazy grandma,” the children squealed and ran.

In middle school, Hieu no longer cried when his friends made fun of him. He rushes into battle with the kids who sting his mother and often comes home wounded.

Once he asked to drop out of school, Mrs. Che Thi Gai (73 years old, grandma Hieu) just wiped the wound and coaxed her: “Mother has always been a mother. Now I have to study well so that no one will despise me anymore”.

In July this year, Le Duc Hieu, 18 years old, from Ky Tho Bac village, Hanh Duc commune, Nghia Hanh district, Quang Ngai has just become a student of the University of Economics in Ho Chi Minh City. The day he heard the news that he had passed university, Hieu cried, his grandmother cried, only his mother laughed and overturned the rice bowl her son had just brought.

Hieu’s mother, Ms. Le Thi Thuong, 47 years old, developed a mental illness 26 years ago. Although the family sought treatment everywhere, from the provincial hospital to Dong Nai, Hue… but there was no relief. When she was first ill, Ms. Thuong spent the whole day mumbling in her room, then screaming, hitting people and then wandering off. Unable to find the energy every day, Mrs. Gai had to chain her daughter under the kitchen porch.

When Thuong was 29 years old, she was abused by an acquaintance. The boy Hieu was born, but the father never accepted the child. Poor family, Mrs. Gai collects every penny to sell vegetables, rice… to buy milk for her grandchildren. Not once did she have enough money to buy a can of milk. The seller is merciful, half paid, half owed. Hieu grew up from those milk cartons.

The mother was so ill that she did not know anyone, including her son. Every time she is hungry, she can only call: “Mother, eat rice”. Ten years ago, instead of living on the kitchen porch, the family was supported by a sponsor to build a small space. In the room that is always locked, the windows are covered with wire mesh, the mother eats and sleeps and cleans on the spot. Mrs. Gai and Hieu took turns washing and caring.

In the past, the family had a field, Hieu helped his grandparents to plow, and the leftover harvested rice was sold to buy books and clothes. But since the grandfather suffered a hemiplegic stroke in 2018, the field is rented, and each crop is paid a few bags of rice. “Only enough to eat, not too much money,” said Mrs. Gai. The family’s medicine and food only rely on 500,000 VND to support the mentally ill and vegetables grown in the garden.

Although the meal rarely appeared meat and fish, only around eggs, beans, vegetables … the cheapest things in the market, but Mrs. Gai taught her: “If you want to have a place, a status… make money yourself, absolutely do not raise your hand to ask!”.

Last year, her husband died, Mrs. Gai discovered that she had an open heart valve, her health went downhill without stopping, she could only take a few steps to breathe, everything in Hieu’s house managed by herself, from cooking to taking care of her mother. In the morning, he went to school, in the afternoon he helped her peel cashews, and at night, he sat down to study. For each kilogram of cashew nut, the couple earns 20,000 VND, the maximum is 5 kg per day. Money earned, mostly poured into medicine for grandmother and mother.

For the past eighteen years, Hieu’s greatest hope is that someday his mother will recognize him. Whenever he got good grades or received an award from the school, he would stand in front of the room door, shouting loudly to show off to his mother. In response, there was only constant laughter or head bangs against the wall.

In 12th grade, even though he was a student in the chosen class of Nghia Hanh High School, Hieu planned to graduate from high school and find a job instead of going to university. “Grandma is working so hard, I want to earn money to take care of her and my mother,” he said his wish to his homeroom teacher, Vo Thi Thanh Hoang.

“If you want to change your fate, there is no other way than to study. You have to try, teachers and friends are willing to help,” Ms. Hoang advised. Every year in the school record of the poor student, the teacher also praised: “Having the will to excel in learning”. The scholarships for students with difficult circumstances, the school also gives priority to Hieu.

In the final year of high school, while his friends were studying for the graduation exam at school, Hieu did not dare to participate because he did not have money. He studied at home by himself, if he didn’t understand something, he asked his friends to explain it to him. Knowing the situation, the teachers volunteered to teach for free.

Hieu applied to three universities, passed all three. On the day of receiving the results, Mrs. Gai was so happy that she rushed to show off around the neighborhood. But at night, she lay crying again, because she didn’t know where to get money to pay for her grandchildren’s schooling. Then she remembered that her family’s areca tree was about to be harvested. “Sold quickly and got 3 million, only had to borrow another 7 million to enroll in school”, the 73-year-old woman cheered. But that same night, the whole neighborhood was stolen, and the three million dong Mrs. Gai hoped for was also gone.

Near the due date, knowing that there was no money at home, Hieu used the excuse to go to school far away, no one to take care of his grandmother and mother, so he quit school. Mrs. Gai wiped her tears and ran to borrow a little each. The villagers knew that she borrowed money to pay school fees for the “crazy mother’s son”, so no one took interest and told her to pay it when she had it.

“There are still many people who love me so much, so I have to try harder,” said Mr. Nguyen Van An, head of Ky Tho Bac village, reminding Hieu each time the local representative brings encouragement gifts from the province and the Red Cross to his family. family. For this village chief, Hieu is a life force that knows how to rise to fate.

Due to the epidemic, the new student cannot enroll in Ho Chi Minh City. He is still at home studying online, in his free time helping his grandmother with food and taking care of his mother. Hieu plans to go to the city to work part-time to support himself. “I’m an adult, I don’t want her to work harder,” he said. Knowing the situation, the teacher is applying for a tuition waiver. If not, this guy is planning to take a bank loan for the next 4 years of university.

Four years of university is the usual time for other students, but for Hieu, this number can be increased to 5 or 6 years, because “if my grandmother is sick or my mother is sick, I will reserve it to go home to take care of it. that continues to go to school”.

For the 18-year-old boy, although the graduation journey may be longer than his friends, there is one thing he is always sure of “will not leave the lecture hall but must strive to the end”.

“I just hope to work in the future and have money for medical treatment so that my mother can call me for two hours at a time: Son!”, the 18-year-old said.