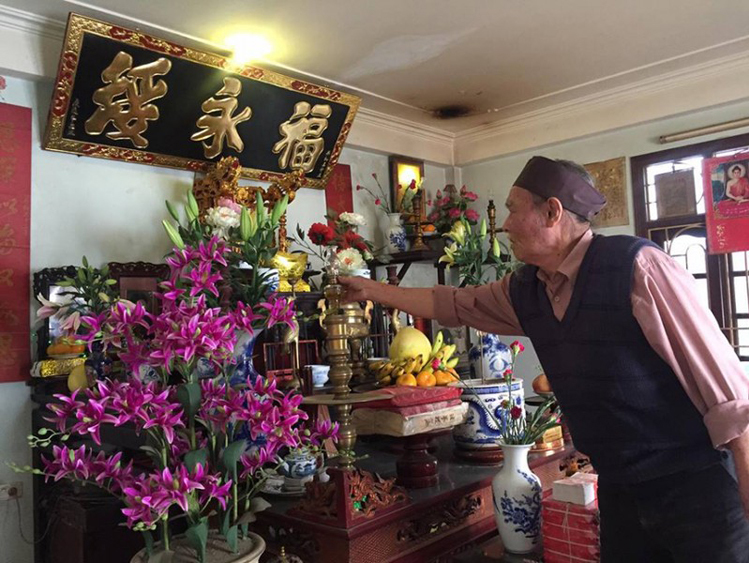 The arrangement of the altar is considered an important thing that every Vietnamese family must perform on the occasion of the Lunar New Year.

Professor, Dr. Bui Quang Thanh, folk culture expert of the Vietnam National Institute of Culture and Arts discussed with VnExpress Some notes when decorating the altar of the Lunar New Year that families can refer to.

1. Clean the altar with ginger wine

In Vietnamese culture, cleaning the altar (Bao sai ceremony) shows filial piety and devotion to the ancestors. According to Professor Bui Quang Thanh, whenever the altar is not solemn, the homeowner needs to clean, not necessarily wait until the end of the year.

Traditionally, the person who cleans the altar is usually a man – the head of the family, with the most important voice in the home. Before wiping, they need to shower thoroughly, wear proper clothes, light incense to ask for permission, and then proceed to work. “There are families, to be careful, the cleaner also uses a towel to cover the face, avoiding direct breathing into the altar, because they think that it will pollute the sacred space of the place of worship”, Mr. Thanh to speak.

In cases where movement is required, incense should be lit to report to the ancestors and then carefully move it down, as much as possible to avoid breakdown. After trimming incense, put it back formally in the original position.

After drawing the incense, the homeowner will withdraw little by little until there is an odd number in the incense bowl (usually leaving 3 or 5 old incense pins). The remainder burns to ash, which can be buried in the stump, should not be thrown in places that are considered unclean, unhygienic or in trash.

2. Platter the five fruits according to the Five Elements

According to the concept of the Asians, the Five Fruits (5 kinds of fruits) are offerings to the altar to worship with different colors, representing the five elements of the five elements: Kim, Moc, Thuy, Fire, and Tho. , which is believed to be the 5 elements that make up the universe.

Therefore, the five-fruit tray often displays fruits with 5 different colors, symbolizing the law of heaven and earth according to the five elements Kim (white), Moc (blue), Thuy (black), Fire (red). ), Earth (yellow). There is also the perception that the five fruits represent 5 things people wish to have, called Ngu Phuc: Phu, Quy, Tho, Khang, Ninh. The number 5 according to folk beliefs is the number of integrity and success.

To combine a five-fruit tray, people in families from the North to the South often choose fruit depending on their liking and perceptions. The fruits displayed on the five-fruit tray are always diverse, bringing the taste of the countryside and expressing the mind of the head of the family with the wishes of peace and happiness. Each fruit chosen to present to the altar is often associated with a common meaning, for example, blue represents balance, peace, red or orange represents luck, yellow represents prosperity. found fortune…

Observing the five-fruit tray of families in each region usually shows a difference. Northern people decorate the tray with five fruits with green bananas, grapefruit (or Buddha), peaches, persimmons and oranges or tangerines. Southerners set up a five-fruit tray with 5 of the fruits such as mango, orange, pineapple (pineapple), papaya, fig, custard apple, watermelon … Many people even deduce from the pronunciation of the name. fruits to choose to put on the tray, with the meaning of expressing the wishes of the family, for example, according to the pronunciation of each fruit, how to achieve: Papaya (full), sung (affluent, rich) Yes), mango (enough money to spend), … As for people in the Central region, the layout of the five-fruit tray is somewhat simpler because the climate in this region is difficult to grow diverse fruits like the two in the South – North, so mainly decorate watermelon, orange, pink, papaya, pomelo, tangerine …

Although the five-fruit tray is decorated with different fruits, but every family always follows a general “principle” that is decorated in the form of large and heavy fruits placed under the base, small weight fruits inserted inside on or alternating into the empty space, so that it looks nice, doesn’t fall out.

In general, it is important in the meeting of common ideas that through the arrangement of the five-fruit tray on the altar, all the devotion and respect toward the ancestors and roots are shown and wishing for a peaceful new year, full happiness.

“Therefore, it should not be conceived that it is only an expensive fruit that is good. The devotion and respect of children and grandchildren towards ancestral merit and parents is the most important thing,” Thanh said.

3. Some flowers are not allowed to place altars on Tet

Currently, many families choose to use fake flowers to place an altar on the New Year to save money and do not have to change water. However, according to Professor Thanh, fake flower arrangements are not recommended because right from the name, it does not show the respect of descendants to ancestors.

In addition, there are a number of flowers according to the traditional viewpoint that should not be arranged for Tet worship such as lily (homonym with separation); Gladiolus (showing the love of boys and girls, often used in weddings); orchids (according to folklore shows the grace of the woman), lilies (showing bragging by wide mouth). According to Professor Thanh, in order to show respect to ancestors, wild flowers growing along the roadside are not allowed to be displayed on the altar.

“The altar is a solitary, sacred place, so do not hang flashing or flashing lights for decoration, but instead should use oil lamps or candles,” he said.

4. The top board of worship is not placed salty

Some families often worship Buddha on the family altar, so they must be placed in the highest position. In families that have dedicated a place for worship, the three-tiered (3-storey), secondary (2-storey) altar is usually preferred. Do not display salty offerings on the top floor of the altar because it is related to killing, taboos in the Buddha’s house as well as folk beliefs. On the top floor you can place fruit, candies or vegetarian food if it’s large enough.

“The traditional Tet tray should be placed at the lower altar. For families living in the apartment, due to space constraints, the altar is often small without hierarchy, hanging like a east chain, when worshiping salty palms should be placed. separate a small table below, “said Mr. Thanh.

5. Place 2 sugar cane on the altar

In addition to the five-fruit worshiping tray, next to the altar, many families also display two sugarcane trees with intact leaves and roots.

According to Professor Thanh, sugarcane has many segments, connected with each other through the eyes located between the two segments, this is why people think that the symbolic cane has a connection between yin and yang and harmony between heaven and earth. Sugarcane has a sweet taste, so the display of sugarcane on either side of the altar also expresses the desire to have a sweet, peaceful new year.

“In addition, sugarcane is also seen as a burden, carrying the fruits of the work of children and grandchildren in a year to send to ancestors in the first days of the new year”, Mr. Thanh said, according to popular opinion. time, sugar cane is also considered as a symbolic “weapon” to dispel all kinds of evil spirits and souls on the way of ancestors to welcome Tet with descendants.