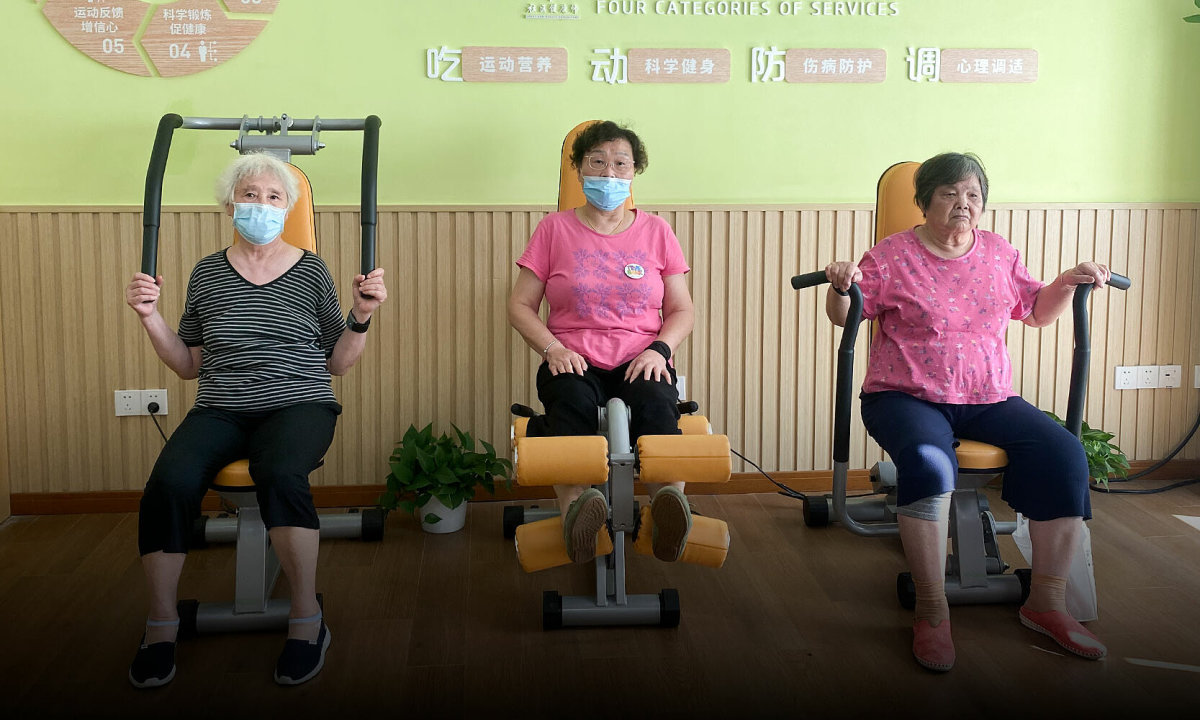 Pan Guoli, 71, has been retired for more than 10 years, but in her neighborhood she is seen as the perfect source of labor.

Hongqiao district, west of Shanghai, is one of China’s many megacities struggling with an aging population. Local officials are tapping into a new workforce to ease the burden of caring for the elderly. They are “young” people like Mrs. Pan.

Ms. Pan started working at a gym near her home, helping elderly people use machines. Many other “young elderly people” work in computer classes or assist older people with doctor appointments…

The model, called Time Bank, was initially successful in local testing. It could soon be rolled out nationwide, as the country deals with the devastating consequences of the demographic crisis.

Four decades of draconian family planning have made China one of the fastest aging societies in the world. It is currently home to more than 264 million people aged 60 and over, and this number is expected to grow to 402 million by 2040.

Social care services in many cities are already overwhelmed. A decade ago, surveys showed that Shanghai was short of more than 500,000 domestic workers, and the problem has certainly gotten worse. The local government has pledged to provide thousands more beds in nursing homes by 2022, but demand far exceeds supply. The Chinese authorities have launched a series of policies to relieve the pressure, but the effect is very limited.

Now they are turning to the Time Bank project to cope with the growing aging population, according to Chen Tibiao, an associate professor in the Department of Economics and Management of East China Normal University.

The Time Bank concept, developed by American law professor Edgar Cahn in the 1980s, encourages citizens to perform community service in return for items or services. More than 20 countries apply this model. China aims to use it in a very specific way: to push the elderly to support those older than them.

“The fact that the elderly take care of the weaker elderly mainly deals with the consequences of family planning policies,” Chen said.

The idea was launched by China’s Ministry of Internal Affairs in 2018 and required a pilot before being replicated nationwide. Since then, many localities have applied.

Ms. Pan’s Hongqiao district tested in 2019. However, the implementation process is not simple. After two years here only 164 people have signed up. “Some people say they don’t need such a service. They want to do everything alone,” said Zhao Chen, a leader in a sub-district.

Despite the government’s encouraging policies, the “young elderly” mainly see this work as a form of charity. Saving time for future use is not what attracts them.

Ms. Pan enjoys this job because of her passion for fitness. As soon as she knew about this form earlier this year, she registered. When the reporter arrived, she was helping a man in his 80s learn to use the machine. This 71-year-old woman has earned quite a lot of “time coins” but has no intention of using it. The main benefit of the job was to keep her healthy. “I mostly want to give, but can also get free help if I need it in the future,” she said.

Officials admit there are good reasons why most people are not interested in “time cents”. They are usually unusable after many years. Coins can only be used locally. Worse, project advocates worry that members may find it difficult to exchange their money in the future without “young elderly” volunteers. So they had to limit the number of coins that members can earn per day.

Some advocates say that this solution, if rolled out across Shanghai, would be more attractive. Zhao said, “We really hope that the Bank of Time coins can be like those issued by the bank. In the future, we hope the project can be expanded to the whole county, then the whole country. city”.

Nanjing, for example, about 300 kilometers from Shanghai, created a city-wide Time Bank system last October, and the project appears to have been a success. In just 4 months, Nanjing’s Time Bank has more than 45,000 registered users.

However, according to Cai Jun, founder of Fanglin Time Bank, China should learn from Japan, which has used similar systems for decades. The Japanese government first launched a Time Bank-like project to encourage people to help each other after the 1973 oil crisis. In 1994, they created another Time Bank program. to help mitigate the challenges of an aging society.

A large part of the Japanese program’s success stems from the fact that volunteers are as well-trained as nurses, thereby ensuring high-quality service and building trust in the system. “Volunteers need to understand the physical and psychological needs of the elderly. All of these require training,” Cai said.

Hongqiao officials try to control the service by asking “elderly elderly” to write reviews, but most of them have difficulty using the internet, so they have to meet in person or talk on the phone. According to Zhao, most of them are satisfied with the services received. One of their most common requests was to be visited more often by “young elderly people”. “But we think volunteers have their own lives. Once a week seems appropriate,” Zhao said.

Despite all these challenges, members of the Time Bank in Hongqiao emphasize, the project has enriched their lives. Chen Wenhua, 79, who has been using the system for two years, said it was especially helpful because she lives alone and her children often don’t have time to visit. “Since joining the project, I feel a lot happier. My children are also relieved because they are always worried about me being alone,” she said.

Every week, Ms. Chen works as a receptionist at Hongqiao’s aged care center. After work, she often stayed and had dinner with other elders in the center’s canteen. She earns extra “time coins” by ordering canteen meals for other members.

“In the future, I may need someone to do it for me. This support brings neighbors closer together, so my children don’t have to worry anymore,” she said.