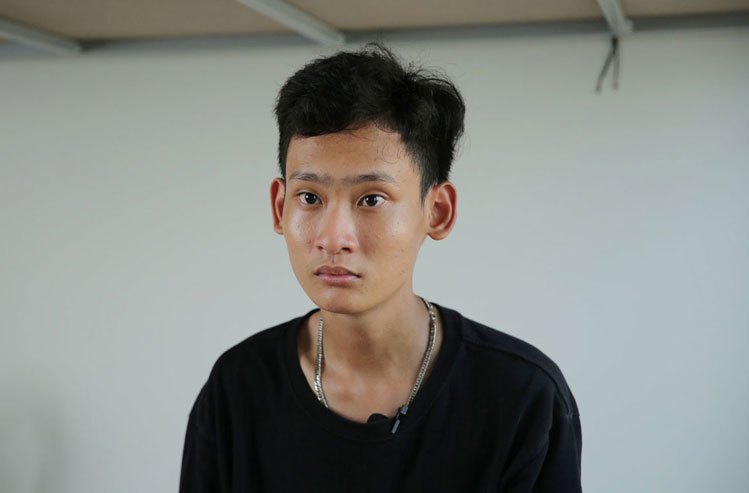 DanangLuu Huu Nghi (16 years old) intended to wait for his sister to finish school before going back to school, but the orphan’s journey to class was earlier than expected when he met Mr. Quyen, Hope School.

“What do you two do when you take a break?”, asked 14-year-old Liu Jiayi, after realizing her brother had been absent from school for three days. “Nghi was eager to learn, Nghi went first, his brother went to work to earn money. Wait for Nghi to finish his studies, then he will continue studying.” Nghi continued.

The conversation of two orphans in the house at the end of the alley in Saigon had only two answers. Little Nghi did not say anything more, just cried because she understood that having no money means one child has to quit or both brothers are illiterate.

In October 2021, Ho Chi Minh City began to lift the blockade after nearly four months of implementing a series of epidemic prevention directives. The new school year begins with online lectures, teachers and students still look at each other through the computer screen. Thirteen days after his mother passed away from Covid, Luu Huu Nghi decided to put a stack of books in a cupboard, lock it, and then quit school.

More than 23,000 lives have been lost, more than 2,000 children have lost their parents or lost both parents after the epidemic, according to statistics from the Ministry of Labor, War Invalids and Social Affairs until October 2021. Including brothers Luu Huu Nghi and Luu Gia Nghi.

The father died four years ago after a heart attack. The house with no number at the end of the alley in Hamlet 7, Dong Thanh Commune, Hoc Mon District, the home of four people now has two orphans who rely on each other. On the day of seeing off his father and receiving the urn of his mother’s ashes, Nghi did not dare to cry. The first time to be a support for my mother, the next time to be a place to cling to me.

The school uniform is changed to the staff uniform of a milk tea shop, bookstore, and restaurant. Nghi’s day starts at 5 am and ends at 10 pm after night English lessons. The money of 4 million dong earned each month is divided very clearly: 1 million for girls’ schooling, 2 million for meals and one million for electricity and water bills. The money to support orphans from the unions, the two brothers sent savings books to take care of big things later.

“Just work hard and get used to it, I never get tired. When I’m tired, no one will take care of my sister,” Nghi said, fidgeting with calloused fingers, remembering that she hadn’t had a day off since her mother’s death.

Nearly 2,000 kilometers north of where the brothers lived, the idea of ​​a school named Hope was born: to raise 1,000 young children who lost their parents to the epidemic until they grew up. Choosing the birth of a school unlike any other in the country, in a time when society is suffering a lot of loss, fear and doubt is a challenge. But in countless ways to help children, Mr. Truong Gia Binh, Chairman of FPT Corporation – founder of Hope School, chose to give letters instead of money, because of the belief that “having words and a disciplined life will help children to live better. change lives”.

Taking charge of the project of Hy Vong school – Mr. Hoang Quoc Quyen and his associates within a year reached nearly 3,000 homes with orphans because of Covid-19 to convince relatives and families to give them to the school to raise them. teach.

Master Quyen came to Nghi’s house on a late winter afternoon in 2021, when he had just finished his shift at a milk tea shop. Teacher told Nghi about the school and friends in the same situation as me. Some friends after more than a year still think their mother is going to the doctor and hasn’t come back yet. Some friends lost both parents and went back to their hometown to live with their grandparents. There were a couple of friends separated by the pandemic, one in Binh Duong, the other in Quang Ngai, trusted each other and then met again at school. The children did not dare to say it out loud, only whispered “Who died in your family?”…

The nearly two-hour conversation at that time did not make Huu Nghi dare to put all her faith in the man she met for the first time. Although he clearly saw the opportunity to go to school for both brothers and ease the burden of living expenses. Their relatives also do not believe that there is a school that feeds them for free until the age of 18, and also supports jobs in the corporation. Nghi asked acquaintances and personally found out more information about the school, and then agreed to meet Mr. Quyen to talk one more time.

“Going to Da Nang or staying in Saigon? Then who will worship his parents if he goes?”, vicious thoughts made Nghi sleepless many nights. But then the best friend encouraged “Opportunity only comes once. Just go, succeed and come back to Saigon” and Aunt Ba’s promise of “Smoke incense, parents let me take care of” of Aunt Ba helped Resolution to go to school.

After the Vu Lan festival in July, the two brothers and their aunt Ba brought their parents’ ashes to the temple to rely on Buddha’s door. The children discussed selling less furniture and renting the house back for 2.5 million VND per month. Contribution to savings book. The two brothers left a room, put all the memorabilia of their parents inside and locked the door. The motorbike that his father saved a few years ago to drive motorbike taxis and take his brothers to school, Nghi gave his cousin a ride.

In early August, brothers Luu Huu Nghi, Luu Gia Nghi and nearly 200 classmates entered the Hope School in Da Nang. “I am happy to meet you, I have enough confidence to stay here,” Nghi told Mr. Quyen on the day of the reunion.

He took a break from last year, so when he entered the school he had to repeat from 10th grade and was placed in the same class as his sister. Therefore, the two brothers have a lot of time to meet and study together. The boarding area has separate floors for men and women and the dining room is also separate, the two children often talk when they go out to take care of the vegetable garden, when the volunteer group comes to get a free haircut. Sometimes Nghi complains of homesickness, Nghi encourages her to “study hard, in three years my brother will take me back to Saigon”.

Nghi was placed in the same room as two other male students. In the same situation, the children easily told each other to study, share sadness and homesickness. Taking advantage of the evening to use the phone for 45 minutes, he often called his uncle and aunt in the South, telling him that he was fine, just not very familiar with the spicy and less sweet Central food.

During the school day at the end of August, Luu Huu Nghi represented more than 200 students on stage to thank President Nguyen Xuan Phuc, the co-founders of the Hope School. Nghi did not talk much about the situation because he knew that his friends in the same house all had big gaps after the pandemic.

The new school year begins when Huu Nghi stands below the stage and dances to illustrate the song Open Arms. Above, Gia Nghi and her classmates from the three regions of the North – Central – South sang “the dead join the sacred in life. And the smile on the lips”.

Underprivileged children will have a better life when they receive the help of the whole community. To accompany and support disadvantaged children, readers can support here.