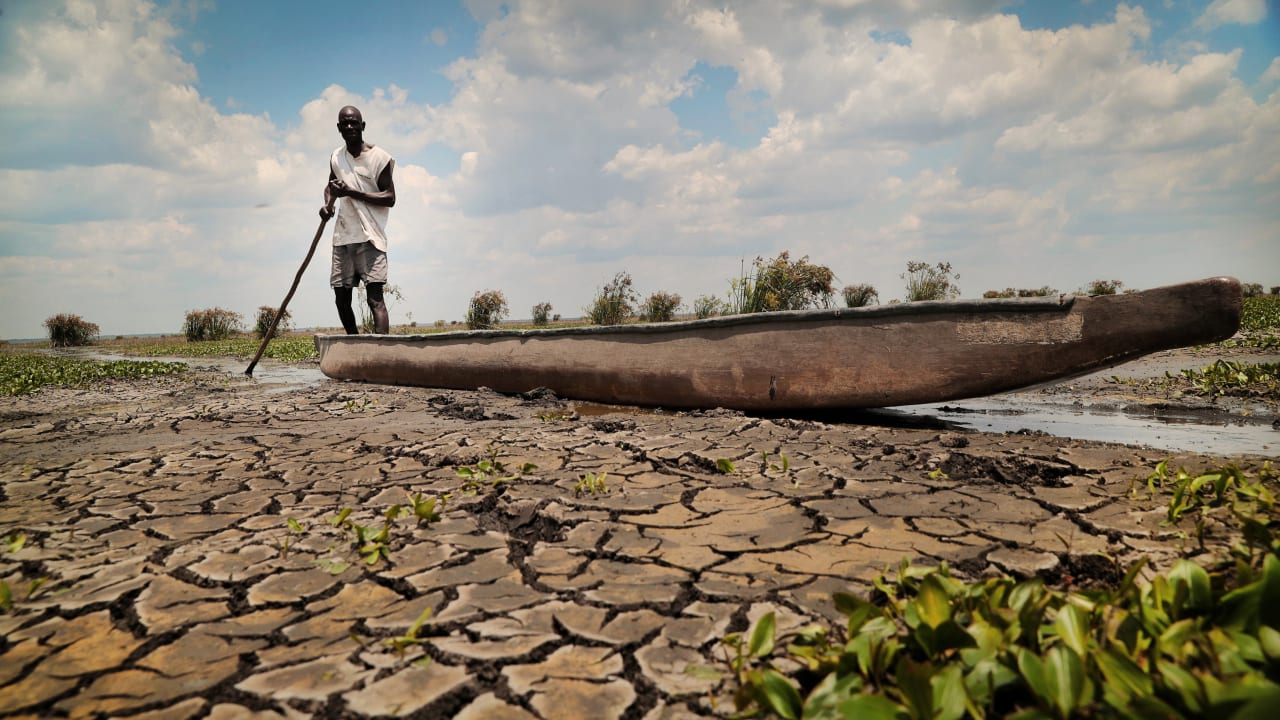 Where there was once a lake twice the size of the Müritz, it stinks of silt, decay and putrid fish. Motor (32) pushes his wooden canoe through a narrow channel in the mud, barely a hand’s breadth of water under the keel.

The fisherman lets his gaze wander over the putrid plain that was once teeming with fish. “We used to catch 200 bream a day,” says Motor. “Today it’s good if we catch a single catfish.”

Lake Ngami in western Botswana works like an inverted clinical thermometer for the Okavango Delta, one of Africa’s largest wetlands. The less the lake indicates, the worse. The Okavango does not flow into the sea, it silts up, seeps away and evaporates on its way through Africa. What remains after the water from the Angolan highlands has rushed 1200 kilometers through the delta fills the lake. In the dry season, when the inflow dries up, Lake Ngami shrinks. It has been like this for decades.

But in 2019, after a hundred-year drought, no water arrived at all. Lake Ngami dried up. Cows and hippos got stuck in the soft mud and died in search of water, fishermen hunted with spears for the last catfish in the mud. To this day, the lake has not recovered from this catastrophe and is only a quarter full. If new water doesn’t arrive soon, it will probably dry out again.

It takes an hour to drive through dense bush grass and withered acacia trees to reach the mud fishermen’s camp. Motor (32) and Ono (32) live in tents under camelthorn trees. A few weeks ago it was only a few steps to the water.

Now Motor has to push his wooden boat 300 meters through the mud before he reaches ankle-deep water. He wouldn’t need a boat for his work there, and there are hardly any fish left either. The fishermen consider tearing down their two tents. “When the lake dries up completely again,” says Motor, “we will have to go back to our home village and look for work there.”

Farmer Topias (62) has had his cattle grazing on the shore for as long as he can remember. When the lake was full, life was easy. There was water for fields and cattle. The villagers stocked up for when the lake dwindled. Again and again they lost cows that got lost in the mud.

“The lake empties, the lake fills up,” says Topias. “A cycle that lasted for years.” But in 2019 it was different. Even hippos died because they didn’t make it back to the delta in time. The birds went away.

Topias lost 70 percent of his cattle. There was nothing left for sale, no meat, no milk. Worse still, those who had bought their cows on credit were suddenly in debt. Couldn’t afford any more food, couldn’t pay the school fees for the children anymore. “The consequences are still plaguing us today,” says Topias. “Many of us are still paying back money.”

A few kilometers along the lake the water is still waist deep, two hippos are frolicking around. Fisherman Meshack (30) has caught half a dozen catfish, guts them and puts them in salt. Is the disappearance of Lake Ngami just part of a cycle that has lasted for centuries? 11,000 years ago the water area here was larger than Greece. The lake disappeared for a long time in the 1980s.

“Of course, the drying up of the lake is part of a cycle,” says researcher Dr. Kelebogile Mfundisi from the Okavango Research Institute (ORI). She has been studying the lake for years using satellite images. “This time, however, the lake was not able to recover in the short term, as it always was in the past. And of course that has to do with climate change.”

Topias’ cattle can still graze on the bank. It has hardly rained in the last few months, the soil is bone dry, a bad omen for the lake? “The water from Angola starts flowing in April,” says Topias, looking up at the sky. “I pray to God it comes.”

The water crisis is getting worse!

2.2 billion people already have no regular access to clean water.

1.42 billion people live in Africa, Latin America and Asia, some with extremely high levels of water insecurity. That means: In these regions it takes more than 30 minutes to obtain clean water. And climate change is making the situation worse. In areas where water is scarce, periods of drought are increasing and the groundwater level is sinking. At the same time, local flooding is increasing. Conclusion: According to the UN, by 2050 more than half of the world’s population will be affected by a poor drinking water supply.

And even if the water still comes out of the tap in Germany: According to meteorologists, this month will be the driest March since weather records began.