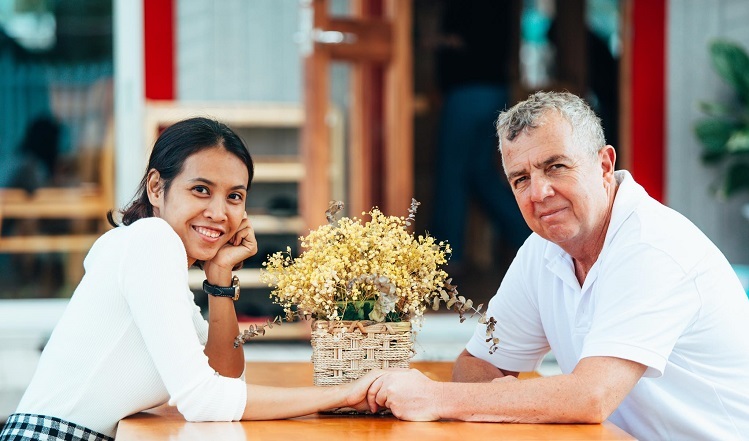 DanangWhile desperate because she thought she could no longer be a mother, Thao Linh turned to Dezso for advice and treatment. They later became couples and had children after more than a year.

In early December, Dezso Molnar flew from Germany to Da Nang after nearly a year away from wife Thao Linh and son Aaron because of Covid-19. Watching the son wrapped tangerine on the side of his father even though it took a while, happiness filled Thao Linh’s eyes. Since the arrival of the child, she knew it would be the best “medicine” to heal her and her husband’s wounds.

When Thao Linh was 19 years old, she was pregnant with her first daughter but had not yet gotten married. Her lover died in a traffic accident. Not wanting to give up the last drop of blood from someone she loves, she left the university lecture hall, accepting the scandal to give birth to Ben. Older children, she goes back to school.

Twelve years have passed since Ben’s birth, a young mother has only thought of her own happiness. But having been married for two years, the couple’s life is never ceased because Thao Linh is always not pregnant. “The doctors concluded that I have secondary infertility. I was very desperate. For this reason, we broke up,” she said.

Divorced, but Thao Linh did not accept the reality without knowing the reason. She asked a friend to refer an overseas obstetrician to help her. This person connected her with Dezso Molnar, a very famous Hungarian obstetrician, working in Germany. From time to time, Dezso still goes to Vietnam to work and work. She decided to email him. During the two months, the two exchanged texts regularly and became close.

In November 2018, Dezso went to Vietnam to work. “As soon as I met her, I knew I was ‘struck by lightning’. In my mind I thought ‘I want to marry her,'” Dezso recalled the first time he met. Six years ago, this man also divorced. Three sons and a daughter both live with their father.

Reading the test results, taking pictures of Mrs. Linh, Dezso said: “Nothing wrong with you”. Thao Linh did not believe it, but when he suggested that she be examined, she was afraid, so she refused.

Responding to the heart of a new friend, Thao Linh took Dezso to visit Da Thanh. The Hungarian doctor likes to go to the museums and historical sites of Vietnam, happy to know that Thao Linh is a soldier’s son. She made her foreign friends admire because she knew Vietnamese military history.

Dezso also softened Thao Linh when she stood crying before the war artifacts in the museum. “He said the Jews had been genocide by Nazi Germany during the Second World War, so they sympathized with the Vietnamese people suffering. He admired the Vietnamese people,” said Thao Linh. Close to each other, they both knew they were shaking.

Leaving Vietnam, three months later, the foreign doctor returned to celebrate the Lunar New Year with her family as a boyfriend.

Love, but Linh does not confidently enter a new marriage after two painful times. She is afraid of differences in culture, children and public opinion.

Understanding his lover’s thoughts, after returning home, Dezso brought two children, one boy and one girl, back to Vietnam to introduce to his girlfriend. “I want them to know I’m serious and let them understand, learn to be good with her family. I also want to prove to Linh that I appreciate this relationship,” Dezso said.

At Thao Linh’s house for two weeks, two young Hungarian men ate all the Vietnamese dishes she cooked. Dezso’s eldest son, Adam, 28, used to wash dishes when everyone was finished eating. They also actively became friends with Ben, her daughter, invited him to go out and eat.

When Adam and his sister returned, Daniel, 26, Dezso’s third son, went to Vietnam again. Listening to Thao Linh’s explanation of the Vietnamese address, he seemed attentive. One afternoon, Linh just entered the door, he excitedly rushed downstairs: “Knowing to call ‘grandfather’, ‘grandmother’. From now on, allow me to call your parents’ grandfather ‘,’ Grandma ‘okay’. That minute touched Linh.

But the most surprising thing for Thao Linh was when he went to Hungary to visit Dezso’s family. The tradition of this country is that the front door of the house is often marked with the names of husband and wife. On the day of arrival, Adam led her to the front door, pointing to the name board “The house of Mr. and Mrs. Dezso – Thao Linh”. He manually set up a new nameplate, replacing the old family board.

Coming to the private house of Adam and his wife, Linh saw that they served pho, rolls on the table, comparing chopsticks for everyone. Hungarian daughter-in-law Monica speaks to her in Vietnamese. She is an artist who has been to Vietnam to study and work for a year. Love Vietnam, Monica can speak and write Vietnamese fluently.

Dr. Dezso’s biological father is a professor, and has taught many Vietnamese students in Hungary. Therefore, he often told his children about the culture and people of East Asia. Everyone in the Dezso family knows how to use chopsticks and there is always a bottle of fish sauce in the kitchen.

“I got rid of all my worries to believe that this would be my new family. Nearly 9,000 km from Da Nang, I thought I was at home”, Thao Linh was more confident.

The two’s relationship also became warm. However, when Dezso offered to take his girlfriend to her clinic for a checkup, she still firmly refused.

After visiting her boyfriend’s family for a few weeks, Thao Linh had a cold so she went to the hospital for a check-up. The doctor concluded she was pregnant. “Go get rid of that man. What obstetrician that my lover is 10 weeks pregnant does not know”, the sonographer said to her jokingly.

The Vietnamese woman sends a photo of the pregnancy ultrasound to her boyfriend. “I’m in a meeting, I’ll call you later. But this is pregnant,” he texted back to his girlfriend. Dezso still thinks Thao Linh sent the fetal ultrasound results of a friend who wanted advice, as before.

“That ultrasound was mine, you idiot,” she texted. Dezso immediately phoned his children to announce the good news. He also compensated for his contract in Germany to fly to Vietnam. Having children, happiness also takes up all the worries in Thao Linh’s heart, but Ms. Dang Thi Mien, 65 years old, her mother is extremely worried. “I think the four children live in Hungary but Dezso still went to Germany to work, there is no reason why he came to Vietnam because of his daughter”, Mien said.

However, her future son-in-law decided to go to Vietnam to find a job to stay close to his wife and the soon-to-be born son. When Thao Linh gave birth for a week, Dezso’s children all flew to Vietnam to visit her. Little Aaron is four months old, the wedding of a Vietnamese couple, Hungarian in-law is held in his hometown.

“When our parents divorced, we no longer believed in love and did not want to have children, but everything changed when Linh’s mother and Aaron arrived,” Daniel said.

Because of his work, Dezso still had to go back and forth between Vietnam – Germany – Hungary. He was only allowed to go to Vietnam to see his wife and children in the last two months of the year, and then had to return to Germany. However, Dezso and his wife still try to maintain a free counseling project for infertile women in Vietnam.

“I used to experience feeling of despair and low self-esteem because I thought I was no longer able to become pregnant, so I understand empathy for infertile women. Besides Dezso’s professional advice, through the project, I want to motivate, confidence for the sisters to soon welcome their own angels “.