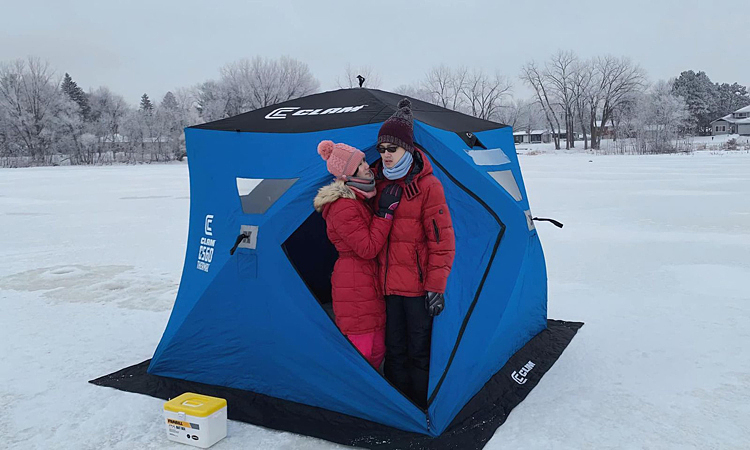 Also, because of being unable to return to the country due to Covid-19, Quynh Tram met the loyal will of her life. The first time they met was the day they got engaged.

So far with this girl, love comes so fast, many days wake up to see her husband lying beside, she wondered: “Is it my dream?”. It has been half a year since the wedding, the young couple still grunts as if they were on their honeymoon. Every day they clean the house together, go to the kitchen to cook, when they go out, they both wear a pair of shirts, not half a step apart, smiling and laughing hand in hand.

Before meeting Tran Loc, a musician with a visual impairment in Minnesota, Nguyen Ngoc Quynh Tram, 26 years old, used to think that way all his life because of his poor eyesight, clearly seeing only 7 basic colors in sunlight, under the lights. only distinguish between black and white.

Tram’s “dream” started from the day she was invited to the US by a charity for disabled artists to perform in the beginning of 2020. Planning to stay for three months, but Covid-19 suddenly broke out, the flights back home were no longer available, she stayed at her friend’s house – artist Thanh Le. One time with severe eye pain, she was introduced to Tran Loc by Mr. Le, who also suffered from glaucoma causing poor eyesight. The children’s story begins with what and where to buy medicine.

But the more they talk, the more they find each other very interesting. Since childhood, in the area with few Vietnamese people, Loc does not have many friends, always feels lonely. Meeting Tram, he is like “a fish meets water”, talking all day without being bored. Not good at Vietnamese, the visually impaired musician tried to text his new friend. Meanwhile, Tram was also not fluent in English, many times had to ask Google to translate. “Yet I still feel your sincerity and loneliness in each message,” the girl realized a strange feeling that was sprouting in her heart for the boy.

Gradually, in the days when he had not seen the message of Loc, Tram suddenly felt nostalgic, his image appeared in his mind whenever he was free. As for Loc, the feeling of regret not wanting to say goodbye after each conversation kept entangling him, thinking forever before pressing the button to send the message: “It’s late, you should sleep”.

Talking back and forth for nearly a month, the day Tram had to get on the plane to return home. Seeing their feelings increasingly progressing, Mr. Thanh Le and Loc’s mother – Ms. Van Thanh – intended to nurture Tram so they invited Tram to play at the house, although at that time the violence stemmed from the case of the black man George Floyd, who was caught. murder – all over America. In mid-May 2020, domestic flights were still considered unsafe, Le and his friends spent two days a night driving Tram from California – where they lived – to Loc’s house in Minnesota. .

“I love the two of them very much, I still chitchat each other all the time but only by phone. I hope they can meet each other, maybe fateful”, Mr. Thanh Le said about his trip.

“Landing” safely after 27 hours, the first time the couple met, but they did not leave tangerines. About two hours later, Mr. Le came close to Tram’s ear and whispered: “Or maybe you two get engaged”. The girl was surprised by surprise, and Loc just smiled. “This pandemic, how many people suddenly disappeared, life is very fragile. If possible, why not try to keep your lover by your side”, the ceremony continued. This time, Tram bowed his head and thought wildly.

Seeing Tram’s speechless, Loc held his hand, his voice trembled: “Agree to be my wife!”. Looking up at Loc, Tram saw only a dim white space in front of his eyes, but still felt his sincerity. Trâm thought about the epidemic, did not know about Vietnam, when would he have the chance to meet his lover again, did not know how lonely Loc would be if he were apart. Gathering up her courage, Tram took a long breath, and grinned and gripped the boy’s hands in front of him. “Yes,” she said flatly.

The engagement ceremony was promptly prepared. Everyone in the house is busy making grilled spring rolls, beef noodle soup, and the altar also presents all kinds of gifts as Vietnamese customs. Loc’s parents phoned “chatter” to Tram’s parents in Vietnam. The boy’s relatives were summoned to present on the same day. The preparation took place in just 3 hours.

Because security in Minnesota was not stable, the jewelry district near home was closed. Ms. Van Thanh had to temporarily get a fake diamond ring for her son to wear for Tram. The guests all abide by the regulations on isolation, wearing tight masks. The first kiss Tram and Loc exchanged also through medical masks.

After the engagement ceremony, Loc did not want to face the separation scene because in June 2020 Tram had to return home. Realizing the bond of the young couple, wanting to create time to get to know each other more closely, the two families agreed to give Tram and Loc a long trip before she returned to Vietnam.

The tour lasted for a week and then ended with marriage registration. On the day of receiving the paper, the young couple dressed and makeup carefully and then took a commemorative photo and posted on the personal page widely announced. All relatives and friends in Vietnam were surprised and asked a lot of questions, many people wondered: “Or is Tram kidding?”. Under each message, the girl smiled and replied, “Because love is mature”.

Tram – Loc wedding took place exactly 3 months after the engagement ceremony. Being a bride in a country, a Vietnamese girl is taught by her mother-in-law to cook basic dishes, something she has never touched before. Tram hopes that when the epidemic stabilizes, she will go back to singing. As for Loc, besides playing the piano at the local association of the elderly, he also helped his wife learn English and compose music. “I just hope you two will always be happy and peaceful together forever like that”, Ms. Van Thanh choked.

Years before entering the singing profession, Tram used to be an athlete with visual impairments and won many domestic and international awards. She is a girl who loves sports and loves singing more than anything else in the world, but now Tram thinks more about taking care of and building a family with someone she loves. To her, the appearance of Loc in life was like a fate, because from the first moment she met, she knew her heart was no longer alone.