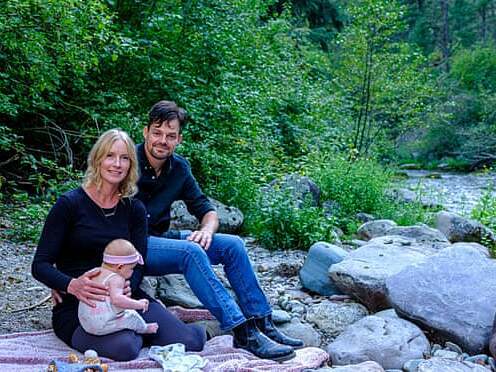 Do not want to lose time for love, worry about broken marriages, financial burdens or fear of ties but still want to have children, many people look for “co-parent” service.

When viewing each other’s profiles online, neither Jenica Anderson nor Stephan DuVal intended to find a lover. They just want children. Both are nearly 40 years old, have a lot in common in health and education, and have stable incomes. Instead of a romantic relationship, they need a partner to give birth and raise children together.

Anderson, a 38-year-old geologist in Montana (USA) has dated 10 different men, mainly through matchmaking sites for people who want to have children without love. Spring 2019, Anderson made the first phone call with 37-year-old DuVal, who worked as a cameraman in Vancouver (Canada). After talking all night, in June of that year, Anderson flew over to meet DuVal. They confide, go hiking and swim together.

“Everything is like a date, except that we are open about the desire to have children early without flirting or love. We seek to achieve common goals,” DuVal said.

Cases like Anderson and DuVal are called “co-parents”. They raise their children purely, not emotionally attached, not even living together. Up to now, this phenomenon is still relatively new. It initially appeared in the gay community and is increasingly popular with heterosexuals.

The “co-parents” mainly find partners through the web. On Coparents – the website was founded in 2008 in Europe, two-thirds of the 120,000 members from all over the world are heterosexuals. Modamily, launched in 2012 in Los Angeles, has more than 30,000 international members, 80% heterosexual. In the UK, the website PollenTree.com attracts 53,000 subscribers, 60% female. During the blockade period due to Covid-19, the traffic of Modamily and PollenTree increased by 30-50%.

Professor Susan Golombok, director of the Center for Family Studies at the University of Cambridge, author of the book We Are Family (We are families) has been studying new forms of family since the 1980s. She has noticed the trend of “having a baby without love” that has emerged since 2015 and now follows 50 such families to evaluate. its effect on children.

“The main question is, how does the unloving relationship between the father and the mother affect them as well as the child? Will the breakdown rate be higher or lower?”, Professor Golombok said.

According to Golombok, the quality of the relationship and the level of intimacy between two parents have a strong impact on the child. “However, not having a romantic relationship creates a more stable environment,” said the female professor.

Anderson already has one son. She broke up with the baby’s father when the baby was one year old. In early 2019, Anderson signed up two websites for co-parents because he wanted his child to grow up with enough parents. “I don’t want to have a relationship. I think it complicates things,” she explained.

Anderson’s parents thought differently. “I’m sure they lose sleep because of what I do. They worry about finances and ethics as well,” said the geologist.

More than 800 miles away, DuVal, frustrated by unable to find a common parent who wants to raise children, also registered an account on Modamily. “I want to have children for a more meaningful life. Many of my acquaintances ‘get married’ to work,” he said.

DuVal met three people before connecting with Anderson. He admires the bravery and upbringing of the American woman. “We talk a lot about parenting scenarios and often share our opinions. Both also share about their personal lives, past relationships,” DuVal revealed.

Anderson is attracted to DuVal’s adventurous and flexible personality. “I feel like he can adapt well to unexpected situations,” she said. “He has the wonderful qualities of a father and I quickly believe in this strange relationship.”

At the end of that weekend, Anderson and DuVal found a good partner. In September, they conceived naturally. “I thought we would get medical intervention but after spending time together, we decided to get pregnant naturally,” said Anderson.

A year since Anderson and DuVal first met, their daughter was born.

Oliver and Kate are also a “co-parent” couple. Over the years, Oliver tried to have a baby with his ex. At the age of 40, he ended the relationship but still yearned to have children so he signed up for The Stork, a site founded five years ago for “ready parents” and has helped 15 kids born.

“Many of my friends get married and have children, but they end up with bad, expensive divorces and only seeing the kids from time to time,” Oliver said. “I think it would be better to find a suitable partner and have children quickly.”

Oliver is introduced to Kate. The compatibility test showed they match up 93%. Initially, they also expected romantic love but after a few dates and sex, they decided to become co-parents.

“Emotions don’t flourish, but we share the principles of parenting. For example, be cheerful and natural, not too pampering, upbringing,” says Oliver. “Everything is so simple, Kate accepts me. She is agreeable and not demanding.”

As for Kate, she is nearly 40 years old, so she does not want to delay having children. Not to mention, she found Oliver to be kind, gallant and capable enough to protect both mother and child.

Four months passed, and Kate became pregnant, also by natural methods. “During pregnancy, we did everything like normal couples, from ultrasound, shopping for baby goods to texting each other as the baby kicked. I was there when the baby was born,” Oliver said.

However, things are not entirely smooth. For fear of being judged on a co-parent relationship, Oliver and Kate pretend to family and friends that they love each other until their son is 18 months old.

“It’s a farce, but both families are conservative. So far, only one – two friends know the truth,” Kate confided. “We should have lived without worrying about being judged. But in fact, being pregnant by a one-night relationship is probably even easier to accept than this.”

The son of Oliver and Kate is four years old this year. Baby spends weekends and one night a week with dad, the rest stays with mom. Oliver and Kate live an hour’s drive apart. They still go on vacation and celebrate holidays together. The relationship between two co-parents is now like a best friend.

Both Oliver and Kate have new lovers. “There is no hatred here. I hope my son will see his parents have a wonderful bond and always give him love and support. We will explain to him when he is old enough.” Oliver said.

“I think there are worse ways to bring a baby to this life. My son doesn’t need to see his parents hugging and kissing in the same house to realize we both love him,” Kate added. .

It doesn’t count how many babies are born out of unaffected “co-parent” relationships. The large websites have surmised the number in the thousands, but there is no concrete evidence.

In a 2015 study, Professor Golombok’s team found that the main motive for someone to find “co-parents” online is to want their children to know both their biological parents. Others worry about aging and the financial burden.

Like any relationship, the relationship between two co-parents who have a child without love also faces numerous difficulties and can be broken.

Six years ago, 37-year-old Amy in California gave birth to a daughter Amy with a longtime friend. Both of them aspire to be parents, have the same parenting point of view and live 15 minutes away by car. They discussed a three-month plan to have a baby together and successfully conceived on the first try.

“I used to dream about beautiful love and disillusionment but still want to have a baby. I can pay $ 500 to the sperm bank but I know there is another free way,” Amy said. For her, that time having sex was a quest to fulfill her goal.

Amy’s mother was excited about having her grandchild, but her father thought it was a “bad” choice.

When Emma was born, Amy’s co-parents slept on the sofa to help her feed the baby at night. When Emma was growing up, they split child care in half and arranged a schedule so that both were close to their daughters. “There were times when I thanked God for bringing him to me,” Amy recalls. “We took family photos, we picked pumpkins for Halloween, ate Christmas and Thanksgiving together. Everything seemed so fine.” However, the time after that became a nightmare because of the fight for custody.

“It was confusing for both of us having sex to conceive. He started calling me darling and hoping for a real relationship,” Amy shared. “We have to go to a therapist. My biggest worry is leaving Emma, ​​and he is most afraid of being abandoned.”

Now, if anyone consulted Amy about having a baby without love, she would definitely say “no”. Finding a co-parent to avoid hurting, but Amy feels like she has just gone through a divorce.

“I feel ashamed of my choice. Looking back, I wonder if my kids really need a father or is it social pressure,” she said.

With Anderson and DuVal, the non-romantic relationship ultimately comes to love. When Anderson became pregnant for the third month, they became a couple.

“I fell in love with him for the very reason I chose him as a co-parent: easy to share, honest and open,” Anderson said. DuVal revealed that Anderson is the only woman he brought back to meet his parents in the past 10 years.

On a sunny day in mid-June of this year, the daughter of Anderson and DuVal was born in Montana. They are still a couple but affirm that no matter how emotional they are, raising children is still the number one priority.

“I think it’s okay to have a baby without love. But it helps if there are feelings,” DuVal said.

“I think parenting is synonymous with love, even if it may not be romantic love,” Anderson added.

Thu Nguyet (According to the The Guardian)