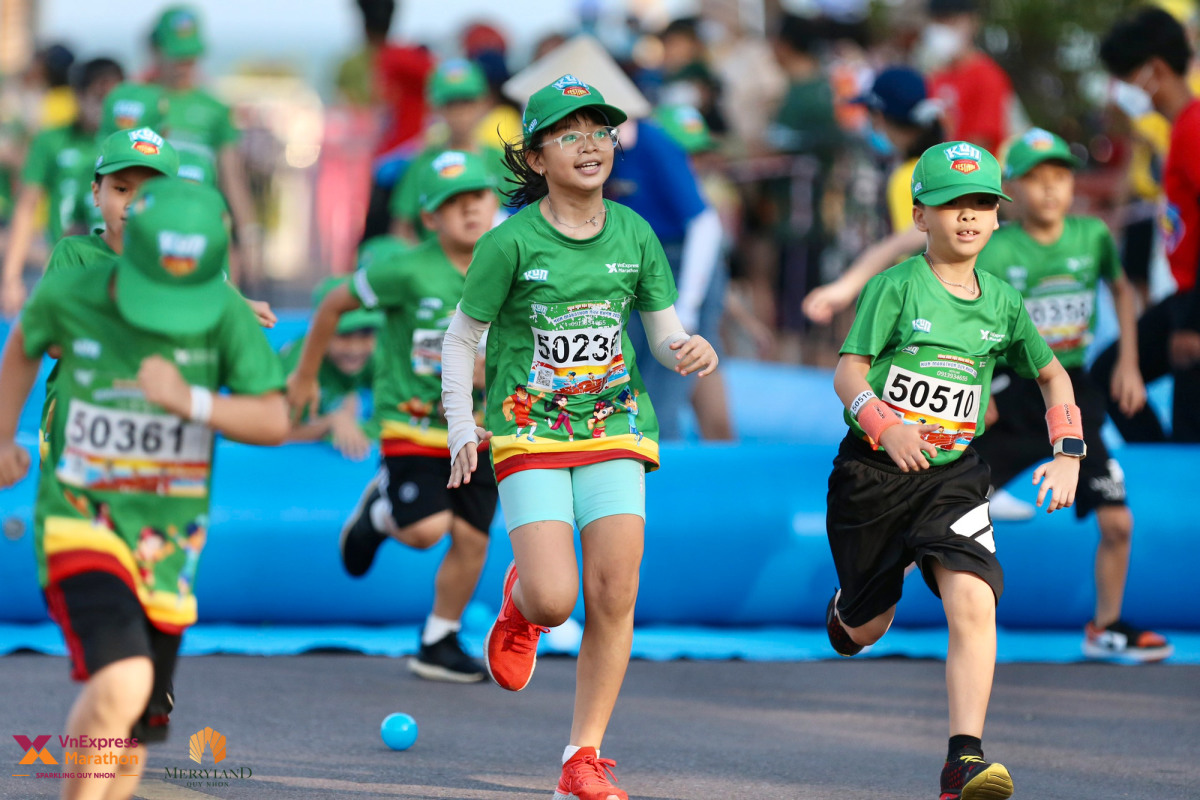 This activity has been maintained by the two brothers for nearly a year now. Nguyen runs 2 km and then walks with his mother, while Duc Anh will complete 5 km with his father. Running became the main sport and hobby of the two children. Sometimes, Duc Anh and An Nguyen ask their parents to let them participate in marathons of thousands of people, to experience the professional sports atmosphere.

Nguyen Van Nam, the parents of two children, said that Duc Anh initially weighed 48kg. Worried about the sloth’s movement, at risk of obesity, he invited her to run together every afternoon. “At first, my son refused to run, I had to encourage him with small gifts to encourage morale,” said Mr. Nam. After a while, the boy gradually got used to the pace of movement and kept the habit until now. Now the children prepare their own clothes and running shoes very professionally. On days when their parents were busy with work, the two brothers ran by themselves in the alley in front of the house.

Due to this, Duc Anh’s weight also decreased to 42kg while the standard height for a 9-year-old child was 1m42. “From the day I ran, I became more independent, active and energetic. The children also invited their neighbors to run competitions and also reduced the habit of asking for snacks,” said Phuong Huynh.

To create a healthy playground, Phuong also established a group of parents, who are friends with children aged 6-12. Every week, the group will meet for a day so that the children have the opportunity to exercise, parents also have the opportunity to meet to share their parenting experiences. The selected locations are usually parks, residential areas with little traffic.

Duc Anh or An Nguyen are not the only kids who love running. The sport that seems to be only for adults is gaining popularity in the younger group. According to some studies, children over 3 years old start to run instinctively. From the age of 5 can participate in a number of short distances, suitable for the body like a regular sport. Over 12 years old, children are fully qualified to participate in marathons.

In a 2009 study from the University of Missouri, many scientists found that high-intensity exercise, such as jogging, also significantly increased bone density. People with high bone density when young are less likely to develop diseases such as fractures or osteoporosis in old age.

In addition, jogging also increases children’s endurance and helps the body to be more flexible. In the UK, the health of students at schools participating in the project running 1.5km a day has also improved a lot. After 7 months of practice, children can run 15 minutes in a row without a break, at a speed of up to 5% faster. Not to mention, jogging also helps children become firmer, reducing the area of ​​wrinkled skin by 4%.

In Vietnam, children’s running tournaments for groups of 6 to under 12 years old are not uncommon, attracting thousands of children to participate. Many parents said that they are willing to let their children participate so that their children can develop both physically and energetically and confidently. Many of these people say that their children have markedly improved their health, reducing their dependence on electronic devices after only about a month of running.

At the Kun Marathon Quy Nhon children’s run a month ago, many people were impressed with many well-trained and fast-paced young runners to win high rankings. More than half of the 2,000 young athletes participating in the competition said that their parents let them practice running before. Many children also expressed their desire to run more because the 1km race track “has not been”.

Ngoc Huy is the kid who finished in second place, the 6-year-old group at Kun Marathon Quy Nhon. Just finished the exam one day, Huy continued to participate in VnExpress Marathon at a distance of 5km with many other adults. The young runner said that from the day his family let him run, he became passionate about this sport. The boy spends 60 minutes a day practicing with friends in the park. Not stopping at training to be healthy, Ngoc Huy said she wants to develop herself and win high prizes in competitions.

Not only has positive physical effects, running has also been shown to help children increase intelligence. According to a study, Swedish scientists have found that increasing physical activity, including running, will help students achieve better in school.

Children aged 6-10 can register to participate in the Kun Marathon Ha Long taking place on July 23 in Quang Ninh. The running race with a length of 700 m, arranged with many obstacles will help stimulate mobility, and at the same time form children’s love of running. litter in the summer. Parents can register their children for free here.