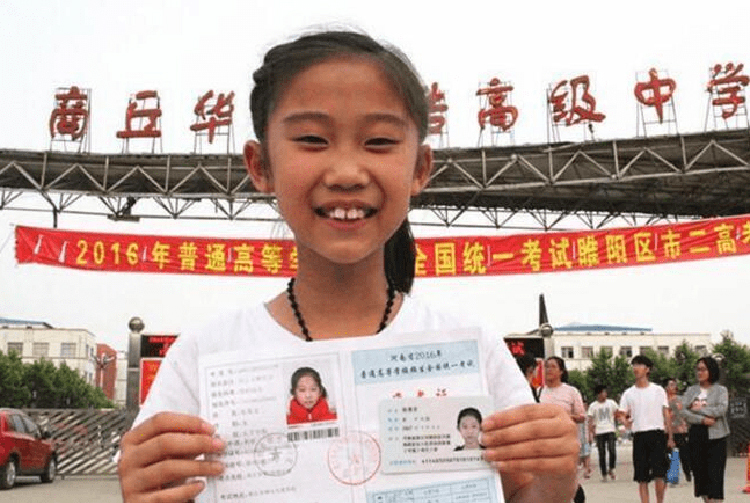 Recently, a video of a doctor in Nanjing forcing his 7-year-old daughter and 5-year-old son to study Advanced Mathematics and Ancient Literature has gone viral in China. While teaching, this “tiger father” also often used insulting words, even using violence when the two children did wrong homework.

Although the police and the Women’s Union later intervened, the father still said he did the right thing, because “for the future of the children”. “This is also my private affair, no one is allowed to attend,” this person declared.

The father’s “violent ripening” education method in Nanjing reminds many parents in China of the girl who was once considered a genius Truong Di Van.

Truong Di Van was born in 2007, in a family with parents working as teachers in Cangqiu city, Henan province. Her father, Truong Dan Thao from a young age, was intelligent and studious, likening himself to “modern Lu Xun” because he had published a number of articles criticizing social evils.

When Di Van was born, Mr. Truong put all his hopes on his son. When she was young, she followed her father to learn letters from morning to night. At the age of four, he already knew thousands of kanji, far beyond the understanding of his peers. At the age of his children going to school, Mr. Truong did not like the schools in the city, so he decided to open a private school to teach his children knowledge.

Truong plans to study very differently. Accordingly, Di Van needs to complete high school before the age of 9, get a doctorate by the age of 20, and then engage in scientific research. To achieve the goal, Truong forced his son to study only scientific knowledge, not to expose subjects such as history, geography… With this method, within only four years, Di Van completed the popular program. necessary information that the average student would take 12 years to complete.

Every day, Truong Di Van has to get up at 5 am to study. After lunch, rest for an hour and study again. At night, she has to study until 10 o’clock before going to bed. In my world, there is no time to work other than study. If you want to go out, you also need to wait for the arrangement and consent of your parents. Di Van always lives in a stressful mood every day.

Once confided in a friend, Di Van said that he had completely lost the happiness he should have had in his childhood. Truong Dan Thao never cared about these feelings of his son. According to him, time waits for no one, so learning is a top priority.

After two years of hard work, Mr. Truong believes that his daughter has reached the standard level in the university entrance exam. The father himself went to the school to register Di Van, when the girl was only 9 years old.

Because I have never attended official school, so I have no student status, registering for university entrance exams encounters many problems. Truong asked many relationships to issue equivalent educational certificates for his children, and finally succeeded.

But that year Di Van got low scores and failed university. The father then analyzed the reason himself and then took his son to the cram school, determined to pass the exam. After a year of practice, Di Van also passed the exam at the age of 10. This time she was accepted into the Thuong Khau Institute of Technology, a three-year program.

The news that Truong Di Van was admitted to university at that time became a topic of interest for many parents in China. Some people question whether the daughter is a tool to advertise the father’s private school. Moreover, a child enters college, a series of difficulties will have to be faced.

Faced with doubts, Mr. Truong was very calm. This man said that he had planned a life for his daughter, so that she could quickly enter a high-class society.

However, with a young student like Di Van, she always feels lost and lonely. Due to being so young, there is a clear generation gap between Di Van and his classmates. Communication is hindered and without a true friend, she always has low self-esteem and fear when going to class.

Because she has not attended a regular school, Di Van’s basic knowledge is not stable. She often feels exhausted because she cannot follow the program. In the second year, Di Van had to switch to studying animation design, because the study was too difficult. In July 2020, she graduated from Shangqiu Institute of Technology with average scores.

Graduated, but no company recruited Di Van because of his young age. At this time, at the age of 13, she could only return to her father’s private school and become an assistant teacher with a salary of 1,500 yuan a month (7.2 million dong).

Mr. Truong has received many criticisms for forcing his children to become geniuses too early, pointing out a path that is too big for his children’s abilities. However, he hit back at those who expressed love for his child: “She feels lonely, but I think loneliness is not necessarily a bad thing, and loneliness is like exercise.” He also outlined the next future for his children when he asked Di Van to take a master’s exam, so he could study abroad later.

Since I was a child, every decision of Truong Dan Thao has not taken into account the feelings and thoughts of his daughter. But now at the age of 15, Di Van has become rebellious, taciturn and often blames her father for controlling her life.

Even so, Mr. Truong is still drawing up a new plan for his 10-year-old son – Di Van’s younger brother: Finish high school in three years, 13 years old will pass into Jiaotong University in Xi’an… This father always believes that his stage-burning educational plan will bring proud achievements to his children.

Chinese netizens are constantly criticizing. “Clearly, Truong Dan Thao’s educational ideology is forcing children to become prodigies, forcing them to grow up according to the framework set by adults without giving them the right to freedom and development. naturally,” one person commented. In it, another commented: “A father’s thought that imposes everything he wants can turn his children into robots that can only learn, but the children themselves do not understand how to learn to learn. doing what?”