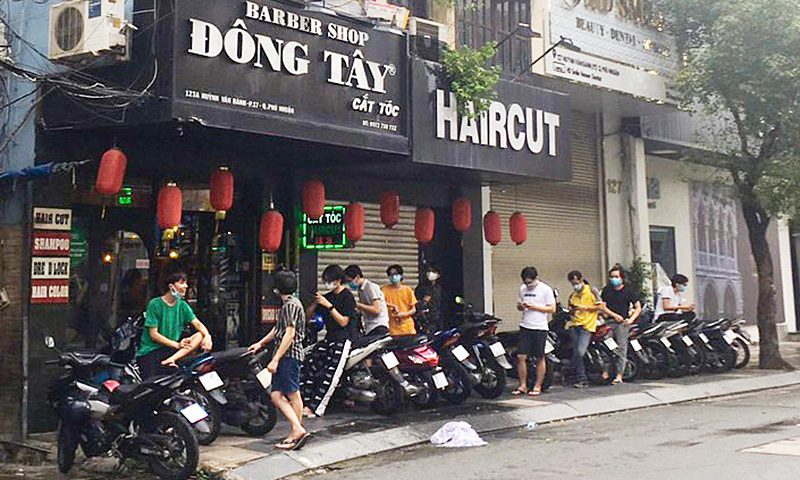 Startled awake by the chatter of speakers and the sound of motorbikes, Vi Xuan Hoa took a moment to remember the days of separation.

The new directive comes after the city of 10 million people experienced more than 120 days of isolation with varying degrees of severity. Since the fourth outbreak on May 26, Ho Chi Minh City has so far recorded more than 380,870 infections (nearly 50% of the country’s infections), treating about 35,000 patients; 14,000 people died.

That night, Vi Xuan Hoa, 26 years old, in Phu Nhuan with a few friends in the inn “welcome New Year’s Eve”. On the morning of October 1, he woke up with a strange feeling. “The squeaky sound makes me feel alive again,” Hoa said.

At 8:30 a.m., Hoa took the dusty motorbike out of the house to repair the fan and cut her hair. Gasoline ran out, tires flat, he walked to a car repair shop about 200 meters from home. As the only auto repair shop near her house that was open, Hoa found 5-6 customers waiting outside the door along with a few cars already in the workshop. Most of the cars that came to repair had dead spark plugs, rats cut off the fuel pipes or had a punctured tattoo, the shop owner and his wife did all the work with their bare hands.

Inflating two tires, he quickly left, making room for the people behind.

After running around on the street for a while, Hoa realized that fixing fans had become a problem because there were no shops open. Instructed, he went to an electrical repair shop on Le Van Sy street. Received the fan, but the shop owner is too busy to fix it right away, come back for a quote later at noon.

It’s only 9 am, the street is quite empty. He rewarded himself with a short tour around Phu Nhuan district. Many months without going out, driving is somewhat awkward, sometimes he is startled by the sound of a car horn.

Looking at the two sides of the road, the shops gradually reopened. Everyone cleans, cleans the glass, some houses play loud music “like the 1st of Tet”. Stopped at a familiar beef noodle shop on Le Van Sy street, but looking at dozens of shippers lining up, he clicked his tongue to give up and turned around.

“Just smell it, but when will it be your turn to queue,” Hoa comforted herself.

Trying to find a few other shops but not yet open, he went to cut his hair with an empty stomach because he was annoyed with his self-cutting jagged hair during the days of separation. For him, cutting his hair is to “cleanse the bad things in the ‘old year’ and welcome good luck”. Another arduous journey begins.

Looking to a famous barber shop on Huynh Van Banh Street, Hoa counted 12 guests sitting in the house, not to mention nearly 10 people standing in line outside. Standing people, sitting people, tired expressions are evident on each face. Check out other stores, some of which refuse straight away, where you’ll have to wait up to an hour, or require an appointment the day before. More than 10 barber shops on Phan Dinh Phung, Nguyen Trong Tuyen, Tran Huy Lieu … he asked, all do not accept customers. Hoa helpless, keep looking.

Hoa realizes that the people who come to the barber shop are regular customers. Fear of “broken hair”, so even though they have to wait in line for a long time, they do not want to go to a new place. With the criterion of cutting short to keep cool, Hoa found a restaurant with few customers, minimizing the risk of exposure during the epidemic.

Entered the 11th barber shop when it was almost noon. Preparing for his turn, the young man saw several elderly people entering the queue again. Seeing that it was illegal to make the elderly wait, he let the old men cut their hair first, then went to find another shop.

“On the first day of the Lunar New Year, every shop is crowded, but no one is abstaining from cutting their hair,” he wittily said.

About to leave, Hoa discovered a barber shop on Nguyen Kiem Street. “Did you wait long, sister. I’ve been rejected by 11 shops,” Hoa said tiredly. “Waiting for someone,” replied the innkeeper. When he was seated, he breathed a sigh of relief.

Completing the only thing in the plan, Hoa returned to the noodle shop and had to give up the second time because the line was still quite long. He returned home with a bowl of vermicelli.

Contrary to the scene of languishing waiting at barbershops, food shops, and clothing stores, there were no people. For workers with 80% salary reduction like Hoa, he has no need to buy more.

At 7 pm, Hoa went to buy bun bo again because he couldn’t order it through the app. “It’s not that addictive, but it’s been a long time since I’ve eaten,” he explained. Still a long line of people waiting like in the morning. Queuing also occurs with milk tea shops, bubble tea and fast food.

At more than 8 pm, returning home with a seafood lunch box in hand, the barbershop near the house is still crowded. Looking at the long queue of people waiting for their turn, the 26-year-old man felt lucky because he had experienced “the tribulation”.