Winning 2 SEA Games gold medals after 5 years without attending the Games is a great gift for Duong Thuy Vi when she turns a new age, and it is the result of a lot of efforts. The secret to the comeback

After 5 years of not participating in the SEA Games (the Philippines cut the content in 2019), Duong Thuy Vi still excellently defended 2 gold medals in Commerce and Swordsmanship won in Malaysia 2017. It is a great achievement because not only After spending 2 years without participating in any tournaments, Thuy Vi also has to face a generation of juniors in the region, when all competitors her age have retired.

“Now I can rest” – Thuy Vi shared after finishing the boxing contest with a score of 9.68, to close the 31st SEA Games at home with 2 gold and 1 bronze. “I feel very happy to have completed 3 days of competition and 3 exams with no negative points. When I look back, I think I could have done better, but that’s okay, I’m very satisfied when I finished my performance.”

There are two reasons for this impressive comeback. The first is the bravery of an experienced athlete. In the first part of Swordsmanship, Thuy Vi was the penultimate performer (drawn number 7/8) and was under great pressure when Indonesian athlete Mauri Nandhira achieved a very high score of 9.67. However, she still excelled to win gold with 9.70 points.

Wushu is inherently a subject that requires silence, especially for athletes who have spent 2 years just “hanging around” at Trinh Hoai Duc’s gym. Stepping out of Cau Giay District Gymnasium filled with spectators, the atmosphere was completely different. But this does not affect Thuy Vi: “Experienced athletes can easily master themselves than young people. I don’t have any problems, but young athletes can get carried away with excitement and have no control over their emotions.”

Once said that “mastering the carpet is the most important thing”, the athlete born in 1993 brought the composure of more than 20 years of Wushu practice to win No. 1. On the second day of competition, she competed in the Martial Arts and also won. 9.70 points. But this time, Thuy Vi took the first exam and no one passed. She doesn’t consider Nandhira’s or anyone else’s exam pressure, because Thuy Vi’s opponent is herself. Before or after, there is no difference.

The second thing is the passion for Wushu. Experiencing difficult and frustrating periods that seemed insurmountable, while the senior generation like Tra My, Thuy Linh or Mai Phuong all retired at the age of 20-22, Thuy Vi is still competing for the throne. enemy at the age of 29.

“I was able to take a break from 2014 when I won all the medals in my hand, but I always felt like I didn’t study enough in Wushu. The reason I keep practicing until now is because I really want to continue. I don’t have any secret, because I’m still standing here until now, that’s the biggest secret” – Thuy Vi affirmed.

Practicing martial arts from the age of 7, playing the national youth tournament at the age of 10 and at the age of 14, Thuy Vi started to join the national team (2007). The golden girl of Vietnamese sports has more than 2 decades attached to Wushu with repetitive daily movements that are somewhat boring.

To prepare for 1 minute 30 seconds of performance in tournaments, in each practice session, Duong Thuy Vi had to practice standing up, jumping, acrobatics or landing. With her own rotation, Thuy Vi performed two rotations in the air and combined with her legs and arms to correct her posture, performing in the most perfect way. Each training session, this female athlete rotates dozens, hundreds of times. And she’s done it again and again in her 20+ years of pursuing her career.

Injuries are inevitable, because peak sports are activities that exceed the limits of the average person. Thuy Vi’s knees sometimes still lose strength, become inflamed, drain fluid, tear the meniscus. Knees, limbs or back are always painful. Many times of treatment, the doctor said that her injury could not be avoided, she only wanted to retire from the sport.

Pham Quoc Khanh in the past broke the knee ligament and had to have surgery. He used to tear his abdominal muscles, but still suppressed the pain when he competed for the SEA Games gold medal. Right at this 31st SEA Games, young athlete Nguyen Van Phuong, after a rotation movement, collapsed and left his test. Phuong was injured before the competition but still compressed the pain to attend the tournament. He was determined to break the ligament of his knee and it took half a year to a year to fully recover.

Thuy Vi is fortunate not to have to undergo surgery like her teammates, but being a female herself, she faces another problem. Spending her youth in the gym, Thuy Vi has almost no time to take care of herself. And yet, the frequent need to hold swords and spears makes her hands not as healthy as normal women.

Vi’s hands are dry, skin is peeling, not healing and to the aesthetic eye of ordinary people, it cannot be considered beautiful. But for female athletes like Duong Thuy Vi, that image proves the difficulties to go through, showing the effort on the training ground. Those hands are beautiful and proud, when she brings achievements to the country. The Southeast Asian Games that Duong Thuy Vi had to wait for 5 years ended after 3 days of competition, with a total of less than 5 minutes of performance, but she did not feel down. She successfully completed the exam without any deductions, and surpassed herself.

Received the attention and support of a large audience in the return to SEA Games after 5 years, but Duong Thuy Vi did not promise to continue playing. She said: “I do not promise people how long I will practice. I just calculated the end of this year and then the next year. Maybe people will still see Thuy Vi on the carpet, maybe also find themselves in a different position, because no one can predict anything.”

The older you get, the greater the pressure to compete. Thuy Vi has passed the stage of pursuing the goal, and the task of defending the throne is even more difficult. Because when stepping on the carpet, all opponents are the same, they have to start all over again. Therefore, the obstacles for her to continue – compared to other young athletes, are also tougher.

This coming July, Duong Thuy Vi and 2 longtime teammates – Pham Quoc Khanh and Hoang Thi Phuong Giang will attend the World Games held in the US. Her goal was then to attend the ASIAD to be held in Hangzhou, China, but this tournament has been postponed and when it will take place is unknown.

Less than a year from now, the 32nd SEA Games will be held in Cambodia, but fans may no longer see Duong Thuy Vi competing on the carpet. Cambodia announced that there is Wushu in the competition content, but they only have Sanshou (playing and fighting) athletes, no Taolu (performing) athletes, so it is difficult to open the content for other countries to “eat”. ” gold medal.

This happened at the 30th SEA Games in the Philippines, when there were events such as Men’s Boxing School (Quoc Khanh won gold), Women’s Tai Chi (Minh Huyen won bronze), but all three events Thuy Vi attended. (Swordsmanship, Spearmanship, Feminist School) have all been removed.

Everything needs to wait until July when the meetings for the 32nd SEA Games take place. At that time, the specific content of the competition will be announced, we will know whether or not the content of Wushu will perform (not to mention whether the athletes themselves participate or not). Duong Thuy Vi may have attended the last SEA Games in her career.

But just keep going, no matter what tournament, she will strive to bring glory to the country from her own hands. 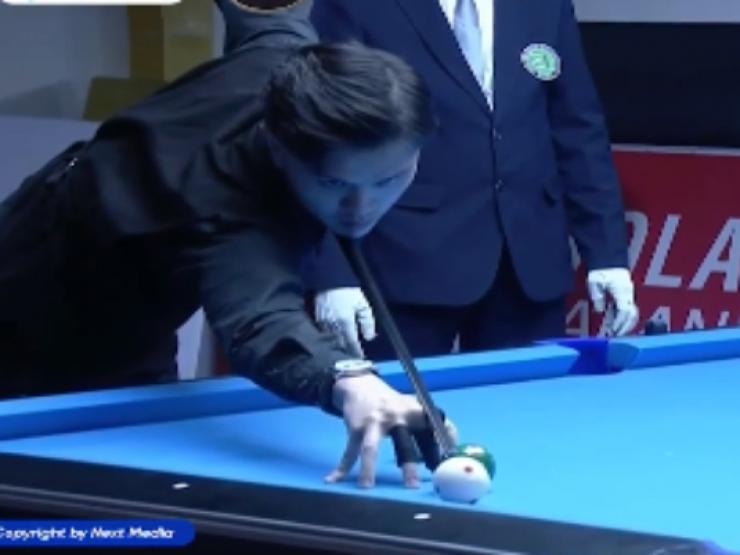