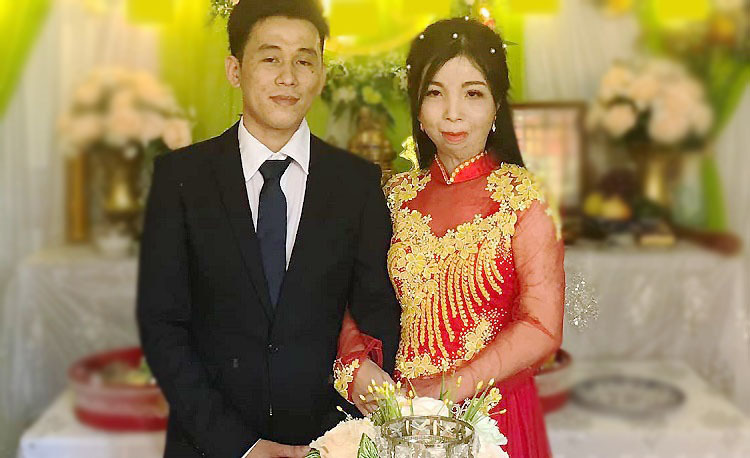 HCMCIn the boarding room, Nguyen Huong stood in front of a lipstick mirror, dabbed a little bit of powder to cover the scar on her face, and waited for the knock on the door of the “shipper”.

Mr. Le Minh Thai, 31 years old, after a day of street deliveries, drove a car to Huong’s room in Tan Binh district. “For me, yesterday was too busy, so we didn’t have any gifts on October 20th, now make up”, he said, handing his heart-shaped gift box. The wife is about to marry, hugging him, smiling. Minh Thai is her first love, a “special medicine” to heal her injuries since she was 10 years old.

That year, the little girl Huong helped her grandfather pour oil from a can into the dying lamp. Unexpectedly, the fire started to cover the body. After seven days unconscious in the hospital emergency room, the little girl opened her eyes and found her entire body covered in bandages, including her face. Before her son was discharged from the hospital, Huong’s parents had to hide all the mirrors at home because they were afraid that their child “could not live” when seeing how his face was deformed.

Huong quit school when she was in fourth grade. “For nine years in a row, if they go out, they only leave their eyes open,” said Ms. Le Thi Hiep, 53, her mother.

When she was 19 years old, her sister got married, her younger brother died of blood cancer, her parents were old. Huong went to Sài Gòn to apply for a job at a company that produced buttons and buttons of an acquaintance to ease the burden on her family. Everyone knows the situation, so they should avoid hurting the girl in the Central region. “But sometimes on the street, the young people used to make fun of me. I kept quiet and they said I was ‘ugly but chubby'”, Huong recalled.

After one year, Huong moved to a garment company in Tan Binh district. Little friends, she finds joy online. Unexpectedly, the social network is the bridge for Minh Thai – the guy who is also a member of the group of Quang Ngai and Huong Huong Council to meet.

In March this year, coincidentally seeing a share of Huong on the group, Thai was curious to see her personal page. “Do not know why I looked at her picture, then exit, then come back to see it again and press friends”, the boy said. He took the initiative to chat. Although they have never met, the two talk well as if they “have known each other from a previous life”. All thoughts in Thai mind did not utter, the girl said for help. “Huong’s sweet, true Quang Ngai voice makes a man who has been away from home since the age of 13, like me, feels warm,” he said.

After a week of chatting on the internet, the two friends met to have a drink at the park gate. Sitting and drinking water and still covering her face “tells the story”, after a few hesitant times, Huong took off her mask and waited for the reaction of her new friend. Contrary to the girl’s suspense, Minh Thai was still happily chatting in front of the crowded park gate.

“I have been running away from home to dust since I was 13. Two years wandering the streets, once going to the capital, hungry and begging no one for food, I had to search the trash. The rice still gave me potatoes. School of life taught me not to look at the appearance but to judge a person “, Thai said to explain his calm that day.

After that, Huong really talked freely and met him more. Listen to him for two days in a row to eat instant noodles. The next day, Huong ordered chicken rice to bring him. Occasionally, the young man would stop by the boarding room, and were fed by a country girl. Thai let go of the chopsticks, Huong already poured a glass of water to the side. “Except for my mother, no one cares about me like her. Huong’s caring way makes me vibrate,” Thai said.

After a month, he took the initiative to confess his love, but Huong refused. She feared it was just pity and even more feared that his family would not accept a daughter-in-law with an unusual face like her.

Not receiving the nod from his girlfriend, but Minh Thai still posted a photo of the two, publicly dating on Facebook. Some friends thought he was joking, “What a wife is so ugly”. Thai laughs saying this is really his lover in the comment section. “For people like Huong, I think that she cannot speak but must act to believe,” Thai explained. At weekends, two people rode around in Saigon for sightseeing. Sometimes people look at them suspiciously, strangely, Thai just laugh, hold his girlfriend’s hand tighter.

He smoked nearly two packs of cigarettes a day, but to make his lover happy, he promised to “quit”. For the first few days, the young man was still carrying the pack of cigarettes in his pocket. Feeling craving, Thai put the cigarette in his mouth, trying to light a lighter. “But at that time, thinking of Huong’s depressed expression, I wash my cigarette and throw it away. People just cannot quit because the motivation is not great. And when loving someone sincerely, I will do it”, he to speak.

On April 30, Huong returned to her hometown, and Thai also suggested to go back to the parents’ parents. Get in and out of the car, he actively held his girlfriend’s hand. Seeing his son bring his girlfriend home, Thai parents were both surprised and worried. “Do you really love people or just joke around and make people suffer,” the father asked his son. “I really love Huong. I was born enough to know beauty and ugliness does not matter, the important thing is that she is good enough to deserve to be loved”, Thai replied. Hearing that, his father nodded.

Huong’s parents are ten times more worried. She did not believe in a good, looking-looking young man who loved her daughter. “It said love but must have been honest,” she whispered to her husband. But seeing both earnestly, the grandparents just called the boy and told him: “You two must live together, listen!”. Thai nodded rup.

Agree by parents on both sides, Huong discussed with her boyfriend to marry early to settle down – exactly what Mr. Thai also intended to say. At the end of July, they got engaged.

“They ask permission to marry me to believe it is true. I don’t know why, but now they look after Huong and work very hard. Maybe God makes up for the disadvantages that my daughter has to suffer”, Mrs. Hiep tearful.

The income from working at the mechanical factory was not stable, so Thai switched to work as a delivery worker. At night, the shipper works outside to earn extra income. The two plan to try to do a little bit of capital to open a rice shop, close to each other in the evening.

“I am happy for Huong when I met Thai. I saw him as a hardworking, responsible, nurturing man for his family. Both of them behave civilly and trust each other so that they can be happy. This blessing, “commented Ms. Ho Thao, the company’s director and also Huong’s close sister for the past 10 years.

Different from the old melancholy appearance, since the day when someone loves Huong, she often laughs, no longer has confidence as before, but now likes to take photos and post it on social networks. She no longer had to cry silently every night for being alone. “I usually have to work part-time but I always take the time to come see me. He said he wanted to make up for his wife,” she laughed.

The wedding of the couple is scheduled to take place in December. For a few days, after taking the wedding photo album, Huong has posted some photos and asked her Facebook friends to help her, although sometimes she has to explain to everyone why. my face is so different.