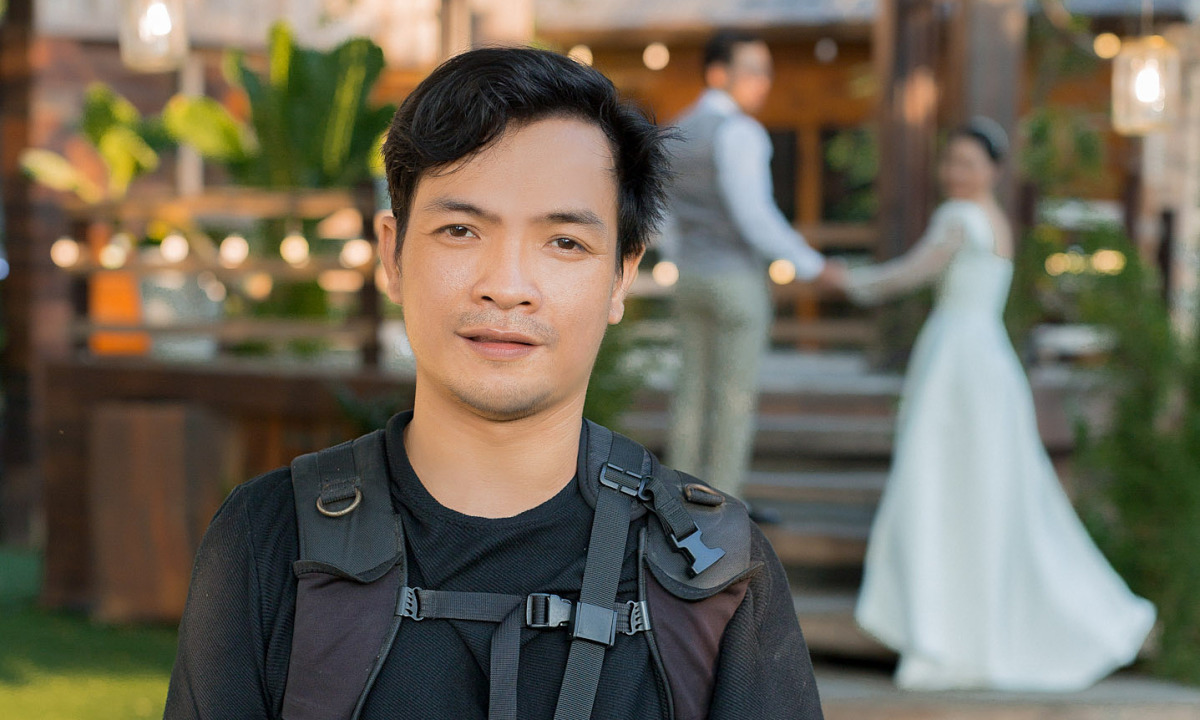 Ho Chi Minh CityThe 3-month free photography course turned the dusty boy Ho Quoc Thong into a studio owner, so for the past 15 years, he has volunteered to teach anyone who wants to learn.

In the afternoon of the end of the year, the owner of the wedding photo studio Ho Quoc Thong in District 12 is busy because of the tight schedule of Tet photography. After a day of work, just got home without having time to eat and drink, Thong received a message from an unknown guy in Dong Nai. That person has a small photography shop, but the skills are still young, and the customers often go away and don’t come back. After the epidemic, doing business became more and more difficult, so I asked to meet Thong to learn to improve my skills.

Thong agreed immediately, asked the boy to go to Saigon to meet him the next morning. “I don’t care if they have a difficult situation or not, as long as they want to learn a trade, I will help them. Maybe from a small predestined relationship, it will help them change their lives like I did 20 years ago,” Thong shared. shall.

Quoc Thong is the oldest brother in a family with three children in Quang Ngai. The family is poor, their parents are farmers, so they can only feed the three brothers. At the age of 12, he left school and followed the villagers to Saigon to settle down. Little Thong was sent to live with his uncle who buys ticks and bottles in District 3. Every day, while his uncle pushed his cart to buy bottles, he followed in his footsteps and sold lottery tickets.

Small body, disabled left hand, weak grip, so Thong is often snatched lottery tickets, many days his capital is broken. For nearly a year, his uncle’s family had an accident, so he couldn’t live together. Thong went to stay with many compatriots who were selling newspapers. After three years of not returning to his hometown, Thong has never spared any money to send back to his family as he once wished.

At the age of 16, Thong moved out with his friends, doing all kinds of jobs from shoe polish, lottery tickets, and accessories to earn a living. No more money to rent, the group pulled together to sleep under the bridge, the apartment yard, wash in the toilet at the station platform. At that time, he wrote only one letter a year to his family. “I have become a real street child,” Thong said.

Although he had fallen into many bad habits, even evils, he was lucky enough to get out. “I always remember that I went to Saigon to make money, not to spoil it, to go back to my hometown to look at my parents,” Thong said.

In the middle of 2003, while polishing his shoes, Thong met an old friend who had slept under a bridge before. The friend said that he is now studying photography and post-processing, but he is able to earn an income. Seeing that his friend in the same scene now dressed cleanly and had money, Thong asked for permission to study. He was accepted into the basic photography class of the Street Children’s Sponsor Association in Binh Thanh District. For three months, he went to school in the morning and shined his shoes in the afternoon.

“The first time I touched the camera, I believed this was my life-changing opportunity,” Thong said.

At the end of the course, seeing that Thong wanted to continue his apprenticeship, the manager offered to introduce him to the “Career Integration” home in Binh Thanh District. Here, Thong was raised, lived, and cycled nearly 10 km every day to a photo shop in District 5 to directly learn about post-processing until 10 pm.

After more than a year, he felt discouraged because he still did not have an official salary, so in 2004, Thong asked his teacher to let him leave school, risking his life to apply for a job. He was accepted to work in a wedding photo studio with a salary of 2.8 million VND, including lunch. After half a year, he applied to work on his own, from an employee to a post-production partner of the photo shop, and also received many orders from many other stores. A year later, he bought a motorbike and a computer to work. Also from here, the students of the next class of the shelter were sent to Thong for vocational training.

“This is also the time when I took my younger sister to Saigon to attend college and my younger brother to learn the craft of filming. After 8 years of leaving my hometown, I brought some money back to help my parents repair the house,” Thong shared.

With his contributions, in 2007, Thong became “Typical Young Citizen of Ho Chi Minh City”. He is supported by the Vietnam Youth Union. Borrowing 85 million dong, he opened a wedding photography studio in district 12, both working and teaching jobs for children at home and anyone who wants to learn a trade.

Over the past 15 years, Thong has trained hundreds of mechanics, of which, according to him, about 60 students have had successful careers.

Tan Tay graduated from college, but for two years he still couldn’t find a job because his left leg was atrophied. In 2016, his father attended a wedding where Thong was the main cameraman. Seeing that Thong also has defects in his hands but is good at taking pictures, the father inquired and knew that he was still providing vocational training for free, so he asked his son to study. Tay was accepted soon after, after two years he returned to his hometown to open a family and baby photography studio.

“At first, I was afraid to take wedding photos, because I thought I couldn’t do it, but now I can confidently do it well. Thanks to Mr. Thong, my life turned to a better page,” Tay shared.

Although he has helped many people, Thong is still not satisfied. He hopes that one day he will be able to set up a free photography class like in the old days. He always thinks that, in addition to his own efforts, life has favored him to meet many good opportunities and people who feel good, so he wants to repay the favor by giving what he has received.

“At that time, I only devoted myself to teaching jobs without having to worry about food. This year I am 36 years old, I still feel young and believe that in the future I will be able to do it”, Thong laughed.