(Tennis news) Serbian hero Djokovic is in a “war” in Australia, a land that has also honored himself as a hero.

As the Djokovic family described it, everything is worth calling a fight. Djokovic landed in Melbourne and had to immediately go in for an interview to check whether the visa and accompanying documents were enough to enter even though he had not been vaccinated against Covid. 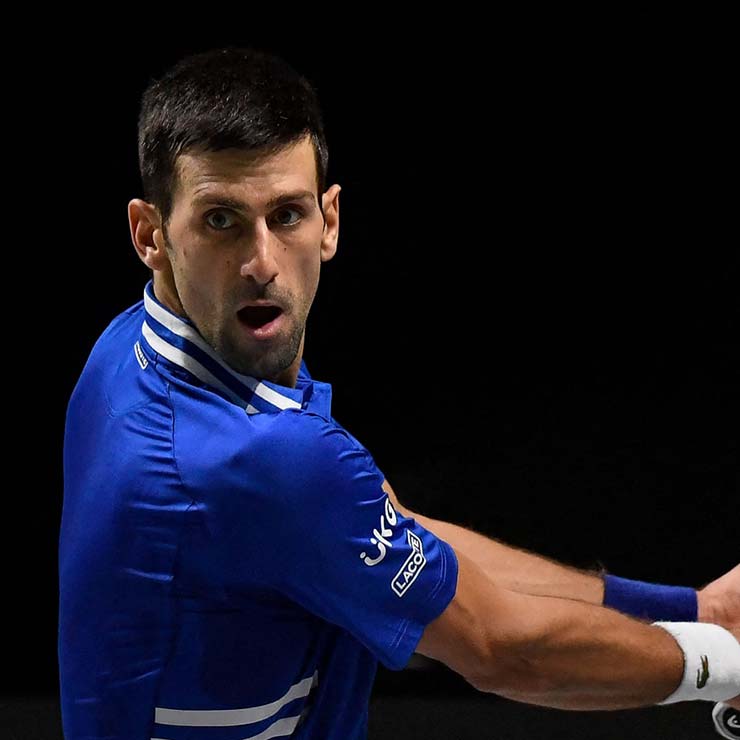 Novak Djokovic is waiting for the decision of the Australian court

Djokovic was only allowed to use the phone for the first 45 minutes, and then empty hands. After spending another 4.5 hours in an isolation room alone at the airport, Djokovic was taken to an airport hotel for illegal immigrants whose all identification documents will only be returned once The Serbian tennis player boarded a plane to leave Australia.

Only Djokovic’s lawyers can help him temporarily stay in Australia until the morning of January 10 until there is a court decision in Australia. Djokovic was initially ordered to board a plane to leave Australia on January 6, 11 days before the start of the 2022 Australian Open.

The pain of a hero

In his life, who has traveled to dozens of countries and been welcomed, Djokovic probably cannot imagine what he has been going through. It became even more terrifying when it happened in Australia itself, where Djokovic was crowned 9 times and became the symbol of the tournament, and may even be sculpted in the Melbourne tennis park in the not too distant future. . 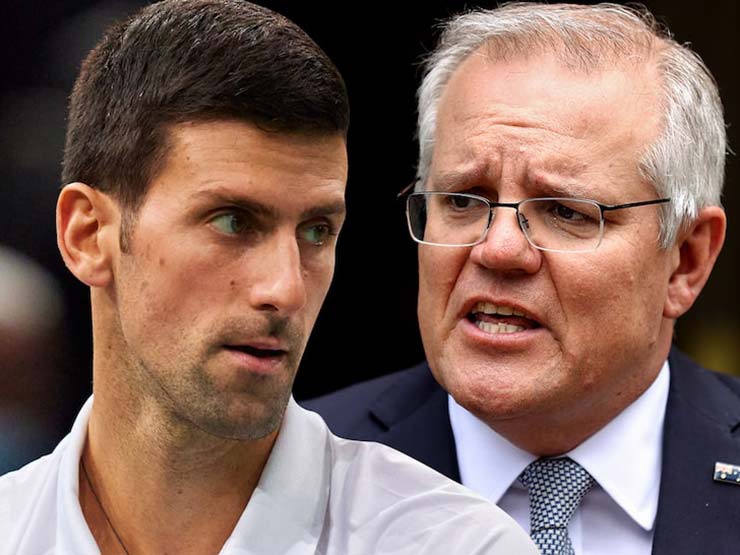 The fact that Djokovic is not allowed to enter Australia has become a political topic related to Prime Minister Scott Morrison (right), not just tennis

Australian media reported that at least 2 tennis players and 1 foreign official have not been vaccinated but are now in Melbourne.

They may have been on the first flight carrying international athletes attending the Australian Open that landed in Melbourne more than a week ago. The identities of these people will probably only be revealed if they are deported from Australia.

Djokovic fans and those interested in the event may be wondering if there was a plot against the Serbian tennis player?

The President of Serbia called this an attack on the country of Serbia. Djokovic’s family claims that “Djokovic is Serbia and Serbia is also Djokovic”.

Nor is it surprising to see such reactions from Serbia. Even if we know that it was the President of Serbia 7 months ago who “begged the Serbian people to get vaccinated” and also sternly threatened that those who “don’t get vaccinated if infected and can’t work will not be able to work”. be paid”.

More than a decade ago, Djokovic was influential enough to call on the owner of sportswear brand Sario Tacchini to build a factory in Serbia. When Serbia conducted the general election, a large part of the Serbian people stated that they wanted to see Djokovic run for election and they would vote to elect him as President. On the day Djokovic returned with his 20th Grand Slam title, the people of Serbia poured into the streets to celebrate as a national festival.

It seems that Djokovic fell victim to his own popularity before answering whether he was a victim of injustice.

Whose fault is it?

Tennis Australia, Australia’s Federal tennis governing body, is the owner and organizer of the Australian Open in question.

But the media has published two letters that Australian government agencies, including the Australian Department of Health, have answered twice in November 2021 to Tennis Australia’s questions about vaccination immunity, both confirming Having been infected with Covid within 6 months is not valid for entry if you have not had 2 injections. 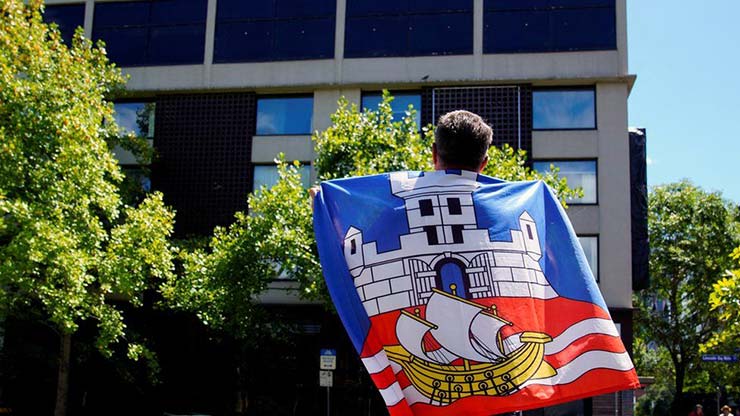 Protesters in support of Djokovic outside Australian federal court

These two newly published letters shed light on the position of the Australian Federal government, and show that Tennis Australia is responsible if they still stand to apply for an immunity for Djokovic.

But Craig Tiley said it was Djokovic who applied for the waiver, which was approved by two Victorian Councils, the Australian Technical Advisory Group on Immunology and the Medical Immunities Review group. Craig Tiley called on Djokovic himself to explain to the media and public.

Djokovic’s family opposed that view, they said that it was Tennis Australia that did it all.

In fact, the search for immunity for those who have not or have not been vaccinated is not unique to Djokovic.

There are 26 such cases in total at the Australian Open, and several of them have been and are present in Melbourne.

Expanding to the sports world, up to 16% of the players playing in the Premier League have not been vaccinated. And the remaining 4 top leagues of European football have yet to reach 100% vaccination rates.

In the US, if you count the number of people in the age group who are vaccinated (aged 5 and over), there are 4 states that have not completed the vaccination for half of the population. And the number of states with the highest rate is less than 80%.

On the morning of January 7, the Victorian government, whose capital is Melbourne, said Tennis Australia had hidden two letters from the Federal government.

Victoria can only consider granting an exemption (Djokovic is more likely to fall under the provision of having contracted Covid within 6 months). As for who is allowed to enter the country, it is the competence of the Australian Federal government agencies (including the Ministry of Health who has sent a letter confirming Covid-19 infection without vaccination, it is also not possible).

As we all know, having a visa is sometimes just enough to help you exit and step on the plane, but to get in, you have to go through a process at the border with customs officers. 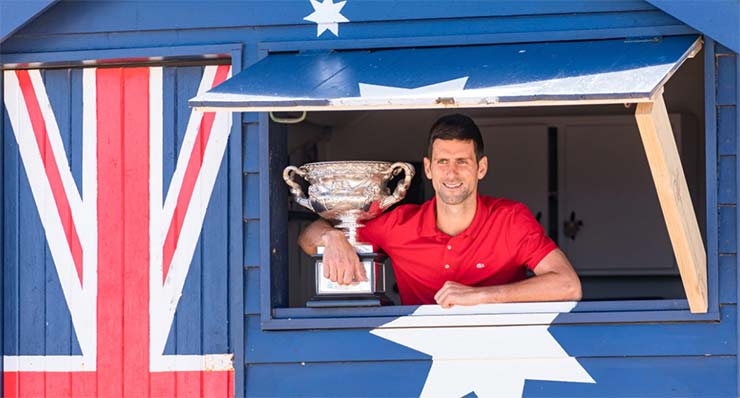 Is Djokovic a victim of Victorian government misconduct?

Australian Prime Minister Morrison has publicly criticized Tennis Australia and Djokovic in his appearances in front of the media (the most recent afternoon 6-1), a sign that if the matter stops at the law enforcement agencies, Djokovic will expelled from Australia, unable to attend the Australian Open 2020.

But Djokovic raised a winning hope when his legal team succeeded in keeping Nole in Melbourne until at least Monday, 10-1.

A court in Australia – the judicial body will be the place to make the final decision.

There is still hope for Djokovic to win the unprecedented battle in his illustrious but controversial career and life.

A battle that is now between the status of the Serbian world No. 1 and the dream of 10 Australian Open, being the first to win 21 Grand Slams in Melbourne does not know which is more important!