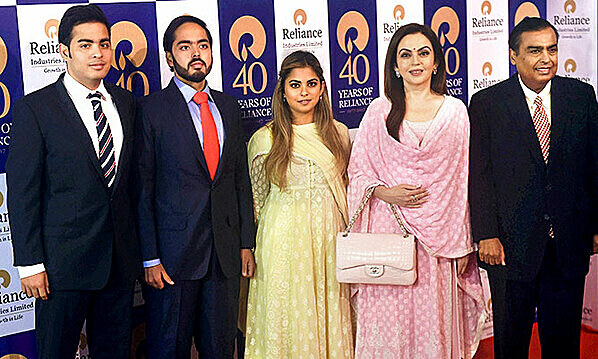 Owning a fortune of nearly $ 90 billion, Mukesh and Nita Ambani still limit pocket money and force their children to travel by public transport.

Indian businessman Mukesh Ambani is Asia’s richest and sixth in the world, but he and his wife still want their children Isha, Akash and Anant to have a normal childhood. For that purpose, they set the following rules themselves.

The Ambani family wants their children to realize clearly that a huge fortune does not just happen. Every day, Mrs. Nita gives her children only 5 rupees ($ 0.07) to buy food in the school canteen. Although she knew that many other children had double the allowance, she did not change her mind.

Spend time with your children

On Sundays, Mr. Mukesh often helps his children with their homework. Ms. Nita said that by doing so, Isha, Akash and Anant will be inspired by their father to take over the family business.

“I told my husband that you can be busy with the future of the company and the country, but also worry about the future of the children,” Ms. Nita told iDiva magazine. “I believe it’s not just the quality, but the amount of time you spend with your kids has a strong impact on them.”

Do not be lazy

In an interview with The Tribune India, Isha Ambani revealed that she and her younger brothers once wanted to drop out of school to enjoy their wealth, but was strongly opposed by her mother. Mrs. Nita asks the children to study hard, eat well and sleep on time.

Ms. Nita revealed to the Entertainment Times that she always knew where her children were, even at which restaurants she ate. For a busy family, keeping members up-to-date helps to stay connected. Today, even though the three children are all grown up, Nita still asks them to report in detail each day.

Anant Ambani used to be obese. To encourage her child to lose weight, Ms. Nita diet and exercise with her child.

“I exercise, I exercise too. If he walks, I will go,”, Nita shared with the page The Times of India. Thanks to his mother’s support, Anant is motivated to diet and exercise for 5-6 hours a day.

Isha revealed that even though she was an adult, she and her brothers were still not allowed to act arbitrarily. The Ambani three children have to obey the “curfew” set by their parents.

When he was still dating, Mr. Mukesh always picked up Nita in a luxury Mercedes. One day, Nita suggested that the two take public transport so that Mukesh could understand how a person from a normal background like her moves every day.

Later, Nita encouraged her children to do the same. During college, Isha, Akash and Anant both used public transport.

Thu Nguyet (According to the SCMP)