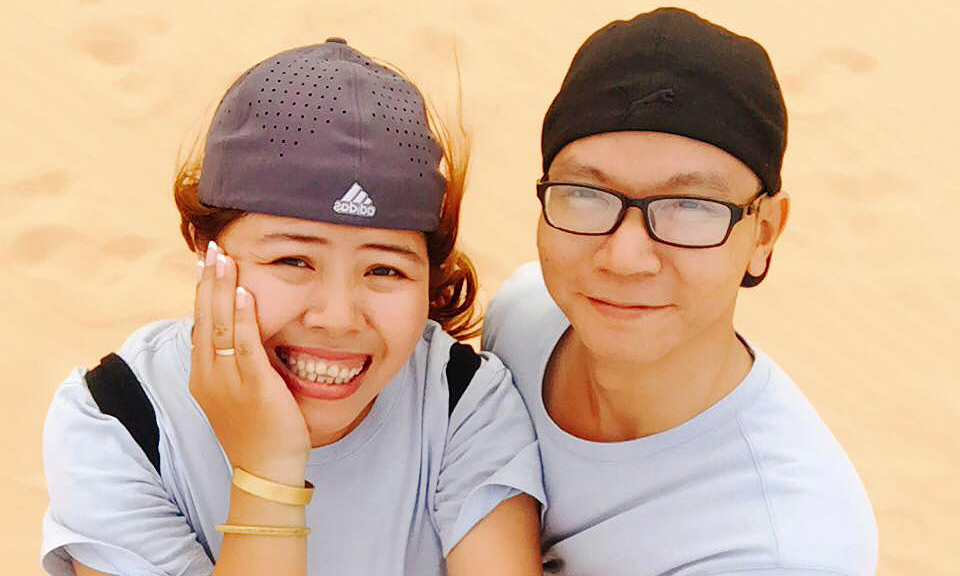 Ho Chi Minh CityLast weekend’s birthday was also the occasion of Phuong Loan’s 5th anniversary of accepting the love of Thanh Nhan, whose aunt often jokes that she is “repaying her predestined debt”.

They met in 2016 at the company, where Nguyen Thi Phuong Loan is the secretary, and Nguyen Thanh Nhan is a new technical employee. This “new ghost” is enthusiastically supported by Loan, like her inherent generous personality.

Halloween that year, the two had a lot of time to talk to each other during the company’s team building trip. Through stories by the fireside late at night, the two drew closer together. Thanh Nhan sees inside a “loud-spoken” girl who has a kind heart, is more charitable and energetic than the person before cancer.

Phuong Loan received the results of breast cancer at the end of 2012, at the age of 33 while having a stable job in the advertising industry. Many ambitions suddenly collapsed. The girl locked the door of the room, crying for two days and nights. So much so that when she opened the door, she dazzled, everything in front of her eyes was blurry. The doctor said that Loan had a dry retina, even crying “wouldn’t see the road”.

Loan’s parents were also devastated by the news that their daughter had a serious illness. The worry that “the green-headed person goes before the silver-headed” forced Loan to get up and go for medical treatment. When she didn’t know the outcome, she was often afraid, when she was sure the spirit of fighting the disease was higher. She calmly informed her family and since then quit her job to pursue her journey against cancer. For nearly a year of chemotherapy, life to her was like hell on earth. Chemicals come in, people are hot like fire, lose taste, hair falls out, fingernails black, mouth sores… The most painful thing is when she has to use more than half of her back skin to create her chest after surgery.

“With a scarred body, illness, and no money, I didn’t think anyone would look at me. But unexpectedly at the new company I was destined to be with him,” Phuong Loan, 40 years old said.

Nhan happened to know about this scar when he saw Loan struggling to scratch his back, so he offered to scratch it for him. In front of his eyes is a long shrunken scar, occupying half of his back, the skin is still young, so it causes itching.

“I didn’t think a girl could endure such a big surgery and injury. My heart ached when I saw that scar and had the desire to stay behind,” Thanh Nhan shared.

Above all the impression because of Loan’s personality, this scar is the biggest motivation for Nhan to fall in love and want to marry Loan after only three months of being in love. This decision of his was initially opposed by his family because the two had “many things wrong”. Loan has an appearance “twice as big” as Nhan and is four years older than him, not to mention that she is sick and has no money.

In March 2017, Nhan’s family went to Loan’s house to go to the alley. Not knowing what she would wear on this big day, when he got to the girl’s house, he looked up at the window. The girl he loves today wears a red ao dai, is shy and gentle, completely different from the usual masculine look. He quickly raised his camera to take a picture.

Looking at the groom’s continuous shooting, Loan suddenly got teary eyed. “It felt like a warm spring, very happy. I knew I didn’t choose the wrong person,” she recalls.

The two were married for three months when Loan’s mother passed away. The shock made her fall into depression, sometimes even wanting to “follow her mother”. Those days Nhan quit his job to stay with his wife. Seeing her husband fast for 100 days to pray for her mother’s recovery and even shave her head to mourn for her mother, Loan was given strength. “He thought about my feelings when shaving, so he did something he’d never done. He said he did it because he wanted to thank his mother for being her husband,” she said.

In 2018, Loan took a chest X-ray and found a cloud of suspected metastasis. The doctor ordered a CT scan of the lungs. Nhan still had the same feeling of being outside the waiting room that day, hands clasped in cold sweat. Seeing his wife out of the room, he ran to help her out of bed, constantly asking “does the medicine hurt your wife, is your wife uncomfortable anywhere?” When the doctor announced: “It’s okay”, Nhan, who was standing behind his wife, suddenly collapsed and hugged her crying for joy.

Difficulties continue to disrupt their lives. During the last routine examination in 2019, Loan received the terrible news: Thyroid cancer. No matter how strong she is, she can’t calm down, calls her husband and sobs.

Once again Loan entered the operating room. Accompanying her is still a husband who takes care of every bite, sleep, pain. Everyone in the Department of Surgery 6 at the Oncology Hospital knows that this husband is good at taking care of his wife. When his wife’s pale mouth could not be swallowed, he poked and laughed and praised “my wife is the most beautiful, my wife is the best, my wife is the most resilient”.

For more than four years of marriage, Nhan did not leave his wife for a day. He used to have a wide relationship, often drinking after work, but now cancels 90% of his friends’ meetings and narrows his relationships. Instead, he worked during the day, worked overtime at the end of the day, and drove a motorbike taxi at night to pay for medicine for his wife. Knowing that his wife loves to fly and jump, only moving is healthy, Nhan took her on a trip, so far has passed more than 30 provinces.

“I once thought for a moment that getting married would be forced, but in fact every day with her is an enjoyable day. My life is complete thanks to her,” the husband said.