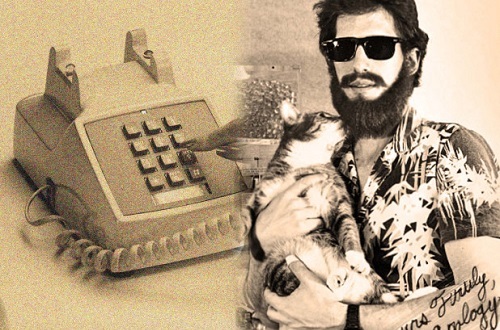 AmericaNew York is a city of secrets but the man who calls himself Mr. Apology has learned more than 100,000 criminal acts, thanks to its “Apology Line”.

Mr. Apology (Excuse me) real name is Allan Bridge, an aspiring painter who has had several painting exhibitions. When he moved from Washington DC, to New York in 1977, he made a living by carpentry and petty theft. Guilt tormented Allan Bridge.

In 1980, he posted leaflets all over Manhattan, urging people to call the secret line to “apologize for the mistakes they made”. He wanted this as a way for people to have a chance to get rid of their guilt and pain from their wrongdoing.

Brigde also plans to make the recorded calls part of an art project to give a glimpse into New York’s “most troubled minds”.

The phone line was connected to the answering machine in the attic in West Chelsea. Persons wishing to disclose are instructed to call from public phones so as not to be tracked and not to provide personal information. The brochures clearly state, with no affiliation with the police, the government or any religious organization.

The phone rings immediately. Within a few years, it received 100 calls per day. Initially, people talked about witnessing homicides. Around 1983, someone confessed to robbing, murdering, transmitting HIV to a partner and a son admitting to murdering his mother …

Once, the police contacted Allan Brigde for information about a man’s confession to beat and rob the property of gay men. Police said a person called the “Apology Line” and described the crime similar to the one they are investigating.

But Bridge refused. He only allowed broadcast of the interview on a radio program so that the authorities could listen. Occasionally, Brigde is forced to pick up the phone to answer those who want to commit suicide. Veterans often tell details of the “really horrible things” that the task forces them to do.

Someone called to threaten to kill the Bridge for controlling the line. “These calls are a burden,” said Marissa Bridge, 64, who was married to him in 1984. “He didn’t make money out of it. So he had to support himself as a carpenter. For many years, it had definitely affected our relationship,” she said.

In the early 1990s, the “Apology Line” took over Brigde’s life. Marissa remembers her husband sleeping a little, spending only some time in carpentry to make a living. He also began to tire when criminals came to his line not to repent. Some of them spoke as if they were bragging.

While his dream of “healing” wrong people shattered, Allan Brigde is isolated by friends who are alienated from him. “It’s hard to be friends with Mr. Apology. He spends every day hearing sin from all of humanity,” lamented Marissa.

At the age of 50, Allan Brigde died of a water motorbike accident. However, the person who caused the accident was never arrested.

“If told, maybe Allan Brigde will tell the person who caused the accident to apologize. He wants that person to let go and not bring any guilt. Sorry is to relieve the pain,” the wife said.