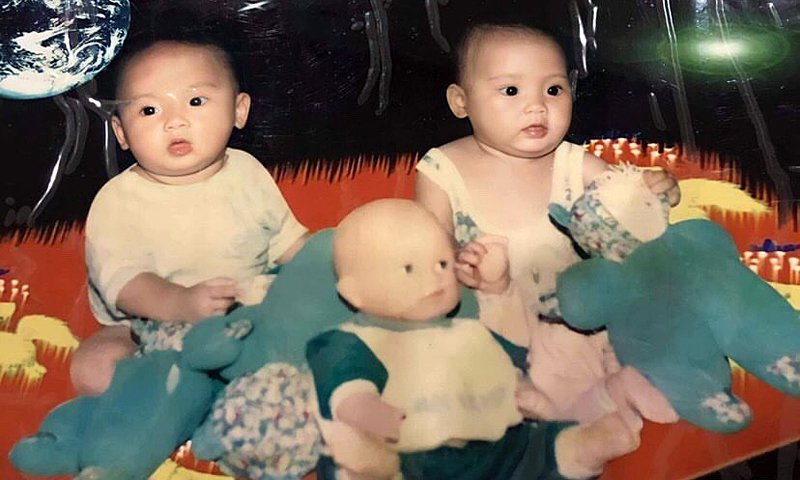 FranceAt 8:00 a.m. on October 29, Tana-Julie Bichon woke up to hear the ringing of her text message. “Found your mother” – the words on the screen made the 24-year-old girl awaken.

The sender is Nguyen Giang, a freshman in hotel and restaurant administration, in Paris. Three days ago, Giang knew that Tana was actually a Vietnamese girl, adopted by a French couple 24 years ago. Tana’s biggest wish is to find her biological mother and family back in Vietnam. Giang has received help posting information on a social networking site with a large number of members in Vietnam, hoping to see results soon. The information that Tana gave Giang was quite specific, including the photo, name and old address of her Vietnamese mother – Ms. Nguyen Hoa Dao – so after only 15 minutes a Vietnamese woman took direct contact. Contact with Giang.

“I can’t believe my eyes. Just the night before, I was still depressed, but I got up in the morning,” said Tana-Julie Bichon, whose Vietnamese name is Nguyen Phuong Thao. VnExpress. She immediately called to alert her adoptive parents. The French couple also couldn’t believe it was possible to find Tana’s mother so quickly.

Phuong Thao works with Giang to connect with her family in Vietnam. The three sides exchanged information and papers to verify that the right person was found again. “Actually I don’t need any papers, I’m sure, because my twin sister looks like me in a mirror,” said Phuong Thao, seeing the childhood and present pictures of her sister, Nguyen Tu Linh.

The video reunion on the evening of October 29 was truly a race before Paris curfew and blockade for four weeks to prevent the Covid-19 outbreak from resuming. Although there are many things, Nguyen Giang still prioritizes translating for this special reunion. They met at 5pm after leaving work at Saint Lazare station. This is also the place where they met three days ago to translate documents and decide to post on social media.

This time in Vietnam is 11pm. Nguyen Tu Linh’s sister from Thanh Tri district to Ba Dinh district, gathered with her mother and her mother’s family. More than a dozen people sat looking at the screen, waiting for a call from across the ocean – the one her mother had been waiting for more than 20 years.

Before pressing the call button to return to Vietnam, Phuong Thao tensed. She knows she will have a lot of emotions and will only have about 40 minutes of talking to her family. The first 10 minutes they just greeted each other and cried.

“I then asked questions that had been troubling me for more than 20 years and I finally got the answers, especially about my relationship with my biological father. adoption, “shared Phuong Thao.

Twenty-four years ago, Mrs. Nguyen Hoa Dao, from Ba Dinh district, gave birth to twins. One armpit with two children, elderly and frail parents, the only source of income is the small water shop next to the park, the young woman cannot support the children. Twins Phuong Thao and Tu Linh wore tangerines without leaving. The mother often leaves her child on the mat to play with each other for the mother to sell.

That year, Bichon and his wife, owner of a business in the Tours region, central France, came to Vietnam to seek adoption. One person who knew about Mrs. Dao’s situation was single and single, so she advised to give away one. Seeing that the adoptive person was well-off and could give her child a good life, Mrs. Dao was relieved.

Not wanting to separate the twins, Bichon and his wife asked to adopt both children. “With both children going, I can’t live,” said the young mother. Finally, this couple adopted Phuong Thao because the first time they met the girl smiled and smiled.

Thao followed his adoptive parents to France, which is famous for the ancient castles on the Loire River. The adoptive mother leaves the business executive secretary to stay at home to raise her children. Phuong Thao had a peaceful and happy childhood.

During the first 2 years, the two families often corresponded. The last letter on December 18, 1998, Ms. Nguyen Hoa Dao wrote: “Dear Mr. and Mrs. Bichon! It has been a long time that we have not received the letter from the grandparents and the baby Phuong Thao. Do not know how are your grandparents and the baby?”. At the end of the letter, she confided: “I look forward to one day when Mr. and Mrs. Bichon take some time for Phuong Thao to come back to Vietnam to play. I’m very sad here because I have to leave her.” However, the two sides later lost contact. In the last letter received by Mrs. Dao, the French couple wrote that one day when they become an adult they will find them by themselves.

From a young age, Phuong Thao was told by her grandparents about how she was adopted. They also told her everything they knew about Vietnam and their motherland. When the child was 18 years old, they handed over to Thao all the adoption papers, the pictures of her mother and aunt. In which, her mother’s letters are what impressed Thao the most. She tried to translate the letter, read it over and over again.

“One day I understood in the letter she said I hoped to see me someday. I decided to find her, even though I was worried that she might have changed after all these years. me too, “the girl confided.

Nearly a month ago, Thao shared with her friends the desire to find her mother, thereby connecting with Nguyen Giang. With the clear information on the house number, Thao believes she will find her mother but what worries the girl is upsetting her mother’s life, maybe she won’t want to meet or will reject her for other reasons. together.

“So when I found out after only 15 minutes I found my mother and the more surprising thing was that she was looking forward to seeing me,” she said.

The video reunion before the national blockade was just the beginning. After that, Phuong Thao and Tu Linh text each other every day, even though one doesn’t know Vietnamese, the other doesn’t know French or English.

Thao talked to Linh more with her mother, perhaps partly because of the “magical rope between the twins”. Through the texts, she learned that her sister was “married” and had two sons. Tu Linh asked her about her boyfriend and life there. After they all came back to talk about personal things, like how they felt about their roots, about dad leaving, things they both missed. “A lot of things I cried and she too …”, she confided.

As for Tu Linh, she said that the mother and daughter often go to the temple for many years and only wish to reunite with her. She originally thought her sister would never find her, so she tried to work and save money, planning to go to France to find her in the next few years. “Your adoptive parents are really good. Me and my mother will take care of your grandparents’ kindness,” Tu Linh shared.

Twenty-four years of growing up with so many doubts and questions, after just one night most of them were answered. Over the past few days, Phuong Thao found herself extremely lucky. She said that now is happy to “close” this chapter of her life, so that she can continue to implement other personal plans. The first is to plan a visit to the place where the cut vegetables are buried.