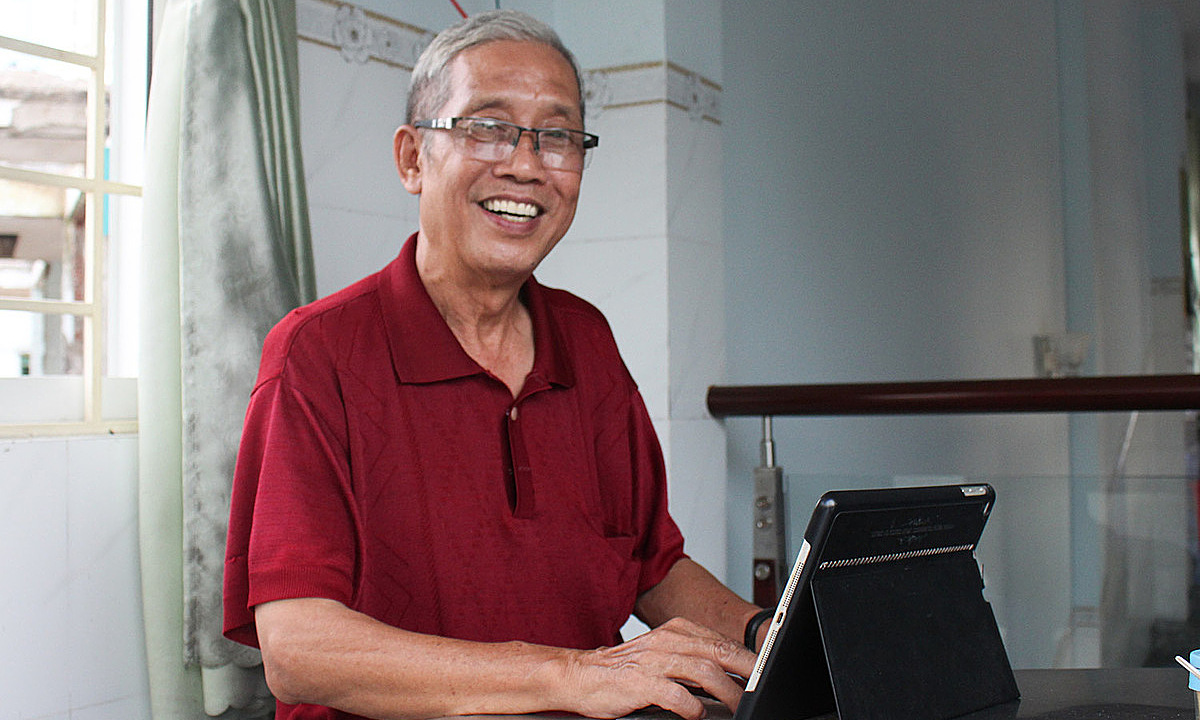 Dong NaiFor nearly 20 years, Mr. Hung, 65 years old, the owner of a beef noodle shop in Bien Hoa City has adopted dozens of students with difficulties to study or to fund a career.

In the bustling music, Mr. Lam Kim Hung sat quietly watching Nguyen Minh Tri open the bottle of champagne with his feet. Today is a happy day for a man with no hands, graduating from Information Technology, An Giang University.

Suddenly, Mr. Hung was startled when he heard Minh Tri’s father call his name on stage, representing the groom’s family to speak at the wedding. In a red tunic, the 65-year-old man could not hold back tears, his voice lost in front of 300 unknown guests. “I am just the groom’s godfather. This is the wedding that I look forward to because I love Tri so much,” said Hung. Behind the scenes, Minh Tri and his wife stood close, trying to reassure Mr. Hung not to cry.

Nguyen Minh Tri is just one of dozens of adopted children of Mr. Hung – the owner of a beef noodle shop in Bien Hoa city, Dong Nai.

“Tri was the first one I actively searched for. Up to now, I have only helped children with arms and legs, but when I knew he was the one who did not have both arms since birth but tried to study properly, I am determined to find it, “Hung began the story.

Earlier this year, one night surfing Facebook, Mr. Hung accidentally watched a video about the life of the student Minh Tri. “After watching, I cried with tears at the thought of the boy with no arms but can do everything with his feet. The questions that kept up in my mind kept me awake until morning: How does it work? But one year, after finishing the two-class program, are there still good students? “.

The next morning, the owner of the beef noodle shop asked his servants to find Minh Tri. When he found it, Mr. Hung knew that Tri was 28 years old, graduated for 3 years and had a stable job in Binh Duong. Through the story, he knows that Tri has a lover for 6 years but has not yet dared to get married, partly because he has not saved money, partly because the bride’s family has not yet approved the marriage of a man in law. Immediately, Mr. Hung promised to take care of all the wedding expenses of both families, pay homage and take care of the school expenses for his children in the future. He returned home to meet two families to cooperate for the young couple. At the end of last October, all 30 boys ‘banquet tables, 11 girls’ tables, bride’s jewelry … worth more than 100 million, were taken care of by Mr. Hung.

“It’s been more than a week after the wedding, but every morning I wake up, I think I’m dreaming. Without my father, we don’t know when we will go back together,” Minh Tri said.

For those who have known Mr. Hung for a long time, no one is unfamiliar with this. In the past, his noodle shop was located next to the Bien Hoa campus of the Industrial University, so it often accepted many students to work part-time. Mr. Nguyen Tan Hung, 40 years old, is from Tay Ninh. The first adopted son of Mr. Hung, 19 years ago, was a student in Chemical Engineering and applied for a job. After learning that Hung’s father died early, his mother walked away. The three of them lived in his grandmother’s house, and Mr. Hung adopted him. He took care of the money to study, took him to his house to live, every day he stopped studying, he would pay a fair salary. “In general, if I need something, he will give it. I once asked me what I want to eat. I said I have never eaten a durian, so he will buy two very large fruits,” the 40-year-old man said thought.

Mr. Hoang Thai, a neighbor and regular guest who often comes to eat at Mr. Hung’s restaurant, said: “When the Industrial University was still based here, many students came to work overtime. There were no customers, but more than a dozen students were competing to serve. Later we found out that he created conditions for students to have jobs to make money. “

In the second year, Hung’s younger brother, Nguyen Tan Thanh, also became a freshman. The two brothers lived in Mr. Hung’s house for nearly 10 years. “My father adopts a lot of children, so now there must be over 50 people. Occasionally, generations of brothers and sisters reunite to visit him. He becomes a relative of my brother, my wedding and father’s funeral.” present “, Mr. Hung shared.

In Osaka, Japan, Truong The Lich, 28 years old, hometown Ha Tinh, has just been working officially for more than half a year, but every month, he still packs a little money to send back to his father to help him to help children in need like me 4 years ago. Thanks to his father, the poor student’s dream of studying abroad can come true.

4 years ago, despite graduating from Education Psychology, University of Social Sciences & Humanities, Ho Chi Minh City, Lich still dreamed of going to Japan to study abroad. With a difficult family situation, my farming parents took care of me for 4 years of college, so Lich wanted to earn money to go to Japan. In Tet 2016, the young man decided not to return to his hometown but to stay and work part-time, hoping to be paid higher salary than usual. Calendar to save money, when enough, you will register to learn Japanese and then borrow more to go.

Initially, he intended to apply for a job at an entertainment center, but thanks to the recommendation of an acquaintance, Lich went to Bien Hoa to apply for a job at Mr. Hung’s restaurant. Initially, the two called each other grandchildren, interviewed and exchanged salaries. After learning the reason why the young man did not return to his hometown for Tet and dreamed of studying abroad, Mr. Hung agreed to accept Lich to work. After doing about a month, then Tet holiday.

“The first day I reopened the shop, he called me to talk privately. He asked me if I still want to study abroad, he will sponsor money for studying Japanese and the initial expenses for me to go,” said Lich. Although he had heard from the family members about Hung’s kindness, to go to Japan to study abroad needed a few hundred million, Lich could not believe his ears when the person who just said that sentence was a “stranger”. only known for over a month.

With the help of Mr. Hung, in April 2016, he started studying Japanese and went to Japan to study computer at Senmon in October of that year. The total cost of three farming helped Lich spend more than 200 million.

“A student who does not return to his hometown for Tet holiday but stays to work part-time, earns every dollar to study abroad, what more reason could I not help. Waiting for him to deliver vermicelli in the restaurant will know when to have enough money” Mr. Hung laughed and said.

“I don’t go looking for people to help, but only help predestined people to meet or go to the noodle shop to do part-time jobs. I don’t have a family so I can do whatever I want to earn. One day, I sell 500 bowls of bun chao. “, Mr. Hung said.

Although he used to help “the right people” with dozens of students and young people, there was a time when Mr. Hung helped the wrong person. More than three years ago, Mr. Hung adopted a young man from Nghe An for adoption because he found him hard work and hard work. But living in the house for a while, once a young man took Mr. Hung’s motorbike to bet football and lost money. Later, every time he lost, this man came to ask for help from Mr. Hung, but on the 9th time, Mr. Hung refused to help. “Every time I help me think that maybe this is the last time, if this last time I do not help, people will no longer have the chance to come back. But by the 9th time I have stopped, this feature must be absorbed in. people can not quit. I let money help other people more worthy “, said Hung.