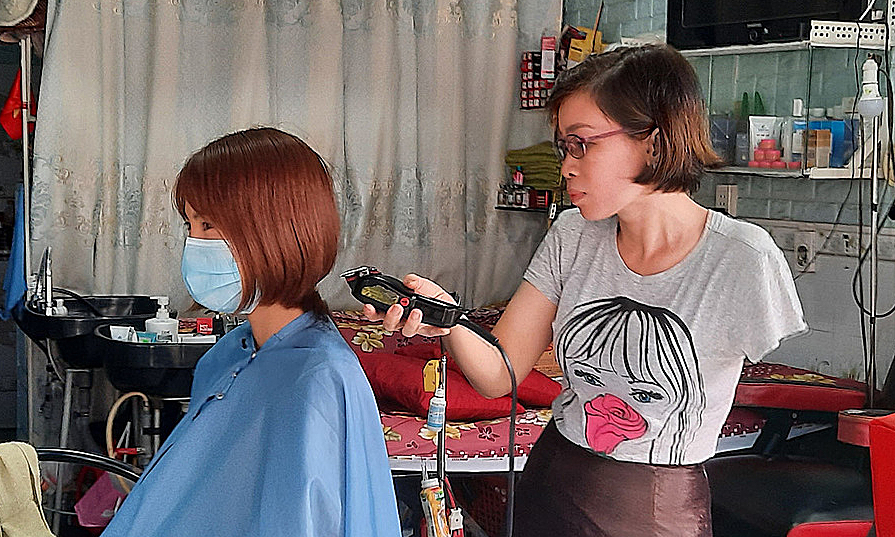 HCMCHaving an accident and losing both her left arm, her husband is a silver man, but Ms. Tram overcame her to continue her traditional haircut, raising two children to study.

Le Thi Kim Tram holds a trimmer that runs through the hair of a female guest. After shaping her hairstyle, she used scissors to trim it back. For a 42-year-old woman, this is the most difficult operation because on her hand, three fingers are responsible for holding and pulling, the other two fingers act as a comb. However, the scissors were still as rhythmic as dancing above the guest head. Less than 10 minutes later, the customer has a new haircut.

“For me, since I lost my left arm, maintaining a barber career and having a stable income to support two children with just one right arm has been like a dream,” said the owner.

She lost her left arm more than four years ago. One morning in August 2016, while carrying her younger brother to work in Dong Nai, the mother of two children fell off the car. The truck came from behind, crushing her arm. Woke up in the hospital with a deformed face, missing left arm, the woman dared not look at the wound. She only saw family members and other patients in the room looking at her and then shed tears.

At first, Tram thought that her life was “over” and could not continue to work, so she intended to get lottery tickets or food to sell. But in my heart, the desire to continue the barbering profession passed down by the deceased father is still burning. During a month in the hospital, the woman always imagined, with this hairstyle, how she would handle it, without her left hand fixed the curls to cut, what to replace.

In the hospital, seeing people in the same situation every day, Tram did not feel guilty. But when they got home, the shop was still open, the maids still welcomed customers, but the owner kept peeking out from behind the kitchen. Doing simple and familiar things like washing dishes, cooking, washing clothes or wearing clothes becomes the pain of a mother of two.

A month later, a male patrons came to get her hair cut. Tram covered her body with a towel. The guest asked, she told the events of her life. The guest thought that he would leave, but suddenly, the guest said: “Before I cut two hands, but now with one arm, just cut one arm, practice with your head”, then sat on the chair. Touched, Ms. Tram holding the trimmer began to try. That day “wrestling” for nearly an hour, managed all the way Ms. Tram also completed the hair for the guests. The guest later also introduced his friends to support her shop.

“I am not satisfied with the hair I have just cut, I am afraid of the guest. But most of all, I am extremely grateful to him because I dare to try it. My imagination at the hospital is far from starting.” , Tram spread her heart.

However, not all guests are “brave” enough to let her cut her hair with one hand. Someone comes and then leaves. Someone also let me try it, but despite being a real guest, I don’t see them coming back again. After half a year since the accident, the shop has had fewer and fewer customers, there are only one person in the whole day. The salary, I only dare to take half because I know I have not done it.

Tram tried to quit his job to change to work as a babysitter at home. But this is also the time when she discovered her son preparing to enter grade 1 imitating his mother, doing everything with one hand. “I saw him go but just swing one hand, the other hand is close to him. I teach him to do housework, he only uses one hand to do.” Asked, he said: ‘You just do like mother,’ she said.

Afraid of being a babysitter, other children also imitated her. Tram gave up her intention to change her career.

Less haircut, but she gets to wash her hair more, her right hand takes over the duties of both hands before. Every time she finished her work, her arm would fall loose, trembling with fatigue. Her teeth and mouth are numb with the need to clamp the tap.

Seeing that the shop was empty, she let the assistant workers quit. Before leaving, everyone gathered together to cut the razor into small razors for the owner to use because she knew she could not do it. When she used up, Tram intended to quit washing because she could not cut it herself.

Wanting to make more money, the shop owner decided to learn how to cut the razor by herself with the thought “I can’t just rely on others in this lifetime”. “In the early days, every time I clamped a knife to my leg to cut, I felt like I was torturing myself because I bleed every time,” she said. After more than a year, she only mastered this job.

However, during the first year, when Tram tried to adapt to her new body as much as she realized how much her husband wanted to leave her. Once, she offered to cut her husband’s hair, but she was immediately ripped off. During the argument, the husband left home for many days, the young mother tried to commit suicide twice, but both times she was held back. “Remembering the scene where the person under the wheel of a truck doesn’t even die, why die for an unworthy man”, she

Mrs. My Duyen, 27, a resident of Thao Dien ward, said: “I know Tram has one-handed haircut for a long time, but I do not know what her skills are, so I am afraid of losing my hair. Coming to the shop, it was very strange because no one had ever cut her hair with a trimmer like her. Trâm had a very fast and beautiful cut.

Currently, the income from this job helps her to pay the rent and take care of her two children to study. Single mothers are not sad anymore. What is most heartbreaking for her is that for the past several years, she cannot take her two children out by herself. Fear of spending money on motorbike taxi, parents and children often hang around at home.

Once, her 9-year-old son was teased by his friends at school to have a one-handed mother, thinking that it took him 3 months to answer him: “I am very proud of my mother, my mother is one-handed but can we can support our sisters to study “.

“The boy only told me when he said this to you. For several months, he endured being teased by friends and did not let me know,” said Tram, her eyes blurred behind the lenses.