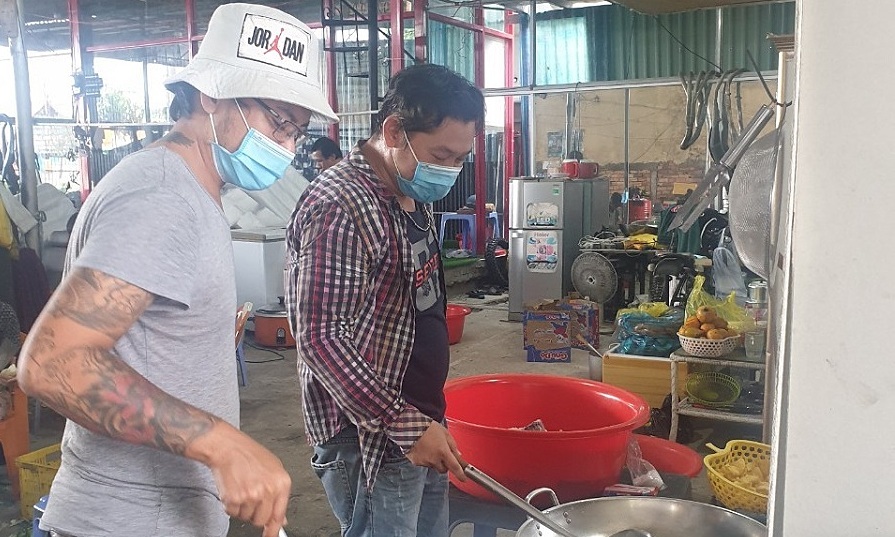 Can ThoAt the age of 16, Giang’s dream was a motorcycle “Xi po” (Sport), and his friend Tuan wanted to build a big house, raising all the street kids like them.

Giang is an orphan, living with her grandmother. One day he went to school, one day he went to sell lottery tickets, but he was very fond of sports cars. At the age of 14, Giang came to Saigon because he wanted to learn the profession of car tuning. On the first day on the big street, stopping at District 10 at noon, the boy was penniless, everyone shook his head when begging for food.

Seeing a teenager about his age washing cars on the side of the road, Giang asked to change and change a meal. When the two children talked, they knew they were compatriots, and were in the same orphanage. That night, Vu Dinh Tuan, a two-year-old new friend, let Giang sleep. But the next day, the shop owner knew that the staff let “dirt people” come to sleep, so he chased them away. Two children went to a boarding house to share a room. Since then, they have considered each other as brothers, working together as porters, accessories, and car washes.

“It’s poor, but when I see someone getting old, it helps. When a child is bullied, it’s his fault. When I said I wish I had a ‘Xi Po’ car, he told me to work together to collect money to buy it,” Mr. Giang recalled.

But just over a year of meeting, Tuan died of a brain tumor, leaving behind the dream of buying a car for a friend and building a house to raise street children. The other left Saigon to return to his hometown, still keeping his passion for sports cars.

“I told myself that if I had a dream, I would get up to do it,” Giang said. Apprenticeship no one accepted, he made friends with people who love “custom” cars. Every time their car broke down, he asked to help fix it, then sat and watched, learning how to fix the mechanic. He taught himself more online, practiced selling cars.

Three years ago, with a little capital and borrowed tools, Giang opened a sidewalk car repair shop near An Cu market, Ninh Kieu district. As soon as he went to work, he went online to receive “free vocational training for street children”. Think only one or two people will follow the job of repairing sidewalk cars, but up to seven young people come to find Giang.

“In the first month, the brothers often had to eat instant noodles and do many other manual jobs to make a living,” he said. Thanks to cheap car repair, the world of cars told each other that more customers came. In the second month, Giang could afford to rent a kiosk in the market. In the third month, cars waiting to be repaired were lined up in front of the shop. Currently, he has rented a place on the main road to open a garage.

The orphan boy named the shop “Tuan Sport” – a combination of the name of his deceased friend and his car enthusiast “Xi po”. Over the past three years, Mr. Giang has supported more than 20 disadvantaged young people to learn free trades. Many people have left the profession and opened their own shops.

Lac Huu Tuan, 18 years old, is one of two orphans who were picked up by Mr. Giang. “He gave me an apprenticeship to repair cars, and my sister, one year younger than me, would ask for a haircut. If I don’t have a photo, I don’t know what to do, because of the translation, I can’t sell lottery tickets.” Tuan said. Before that, when my father died of heart disease, Mr. Giang bought a coffin and drove it to Vinh Long for burial at 3 am.

“Covid-19 made me lose a lot of things and realize that life is so short. I remember more about my friend’s dream of helping people,” said Mr. Giang. The first thing he did was with his students in his auto repair shop to register as a volunteer to fight the epidemic. In mid-July, the whole city of Can Tho implemented a distance, and Hung Phu ward, where Giang lives, is one of the hot spots.

In addition to driving medical staff to take mobile samples for testing, Mr. Giang carries free necessities to help sponsors and distribute them to the poor. After more than 10 days, the donations ran out, but still received a message asking for help, Giang bought it out of pocket and gave it out again. To areas where agricultural products could not be consumed, he transported them to the city to rescue people.

One day, Giang took his wife to the hospital for examination, saw the old man sitting outside the gate chewing raw shrimp noodles, he told him: “This afternoon I will cook rice for her”. That July afternoon, he and his students drove the car to buy food, cooked more than 200 meals of rice and brought it to the hospital.

In the following days, his kitchen, with the help of his friends, was on fire from dawn, cooked 500-700 meals a day, distributed to the poor throughout Can Tho city. The trips to rescue agricultural products and distribute free necessities often drag the man whose wife has just given birth until 1-2 am to return.

“The daily cost is 7-15 million VND, I take care of it with my own hands. I don’t call for anyone. The sponsors know, if you want to support, support necessities, I don’t accept cash,” he said. Jiang said. Ngoc Nga, his wife was not happy at first when her husband brought money to help strangers, but when she heard him talk about his poor childhood and how the couple used to beg for charity when his father-in-law was hospitalized, she did not stop her husband. .

Ms. Truong Yen Hong, 65 years old, in Cai Khe ward, Ninh Kieu district often stands out to receive relief supplies and free meals for the poor from Mr. Giang’s trips. “I see many people suffering, also loving, but can’t do it like him,” she said.

Mr. Giang’s volunteer activities have been proposed by the Chairman of Hung Phu Ward to the district for a certificate of merit. “Giang is enthusiastic and responsible, helping many people, doing many things at the same time,” said Nguyen Thanh Tuan, the ward chairman.

On September 30, Can Tho eased the distance, Mr. Giang and his friends both cooked rice to support hospitals and reopened the garage for car repair. He said that he still dreams of building a big house and teaching many children jobs.

“My friend’s will is now my wish. When I give it away, I get a lot of good value in return. Even though I don’t have money now, I feel my life is very rich,” he said.