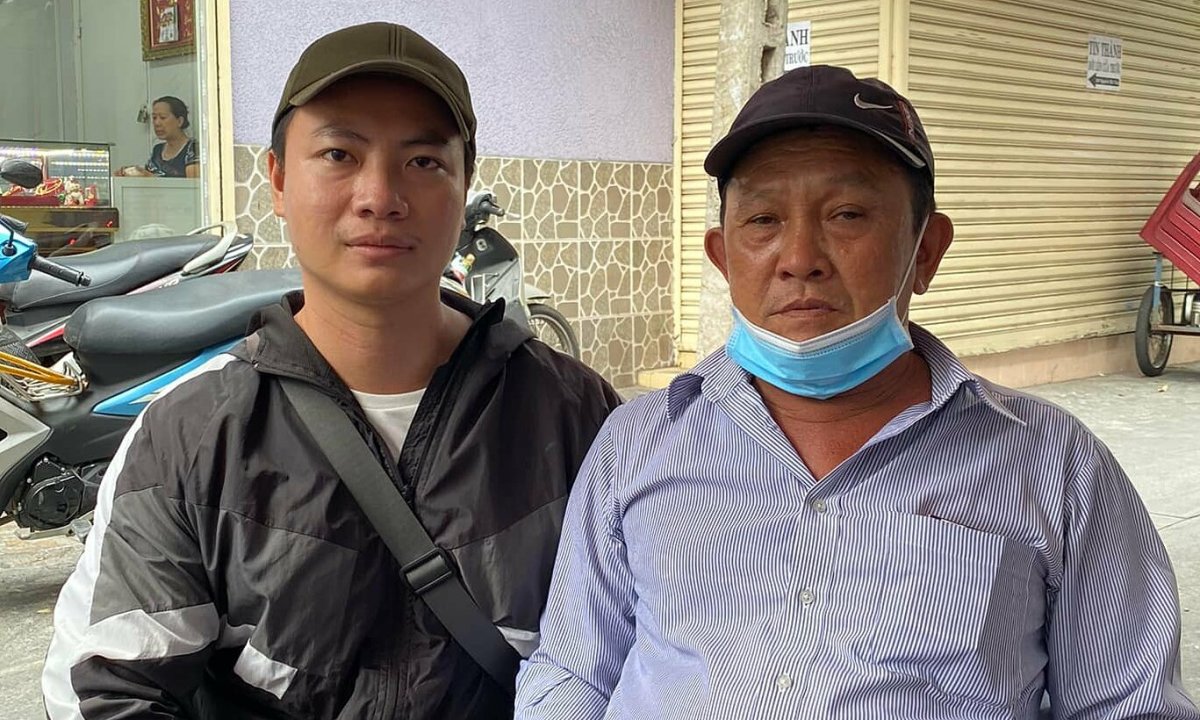 Ho Chi Minh CityThree years ago, when helping a Vietnamese girl in France to find her birth mother, Hong Phuc did not think he would become a bridge and help relatives of separated families find each other again.

At the end of June, after working time, Do Hong Phuc, 27 years old, did not go home immediately, but drove a car from Go Vap to Binh Thanh district. Today, he accepted to help a girl in France find information about her mother who was lost more than 20 years ago, according to the address they provided.

Compared to the previous cases with only the name of his father, mother or the area where he lived, this time Phuc believes that he will soon succeed because the information recorded in the household registration book that the girl gave him is very detailed.

But he was wrong. At this address, no one knows who the people named in the household registration book are because they have sold their houses and moved elsewhere for a long time. The search was suddenly deadlocked. “This is the second case in June, I lost track in the middle. But if they are still in Saigon, I’m sure to find out,” he affirmed.

In the past three years, this 27-year-old architect has encountered many such deadlocks. Phuc said, he never gives up because every time he helps overseas Vietnamese to find his parents and blood in the country, “that joy cannot be bought”.

The first case he helped was a Vietnamese girl in France looking for her biological mother in Ho Chi Minh City, when this person shared information on social networks, in 2019. “I really want their mother and child to be reunited, so I took the initiative to contact them. contact, please support”, Phuc said.

After a few days of questioning, following the information provided by his family in France, he found the mother. The moment he connected the phone so that mother and daughter could meet for the first time after many years apart, Phuc knew what he was doing was of great significance.

After that time, he shared his desire to help reunite families on his personal page, many Vietnamese in France, the US … actively contacted for help. “Most of these people went abroad for adoption in the 1990s for many reasons, and when they grow up, they want to return to their roots,” he said. The search cases are very diverse, some people still keep the specific address and information of their parents, but in many cases only knowing the district, district or orphanage used to live, it is very difficult to find.

On average, each month he receives 2-3 requests for help, depending on the difficulty level, each case takes a few hours to several weeks, but prioritizes feasible cases with clear addresses. Phuc often spends the rest of the day after work and on weekends to search, without affecting his work. Accompanying Phuc were a few friends who helped him find and work as an interpreter.

Not only searching for families who lost their children in Saigon, he also many times drove down to Vung Tau, Dong Nai, Long An and some western provinces to inquire about information. Phuc said, the saddest thing is that there are times when even though he has to go far away, the information is not accurate, forcing him to stop searching. “But never once was I depressed, intending to give up this job. Still have the strength, and the proposal, I still do,” he said.

Referring to the fastest reunion, he told about the case of Lisa (whose name on the birth certificate is Ngoc Lan), who was adopted in France in 1998. In February 2021, she actively contacted him to ask for help. biological parents in Ho Chi Minh City. Based on the information provided, he went to the address of Lisa’s grandmother on the papers, but they had already left. Fortunately, the neighbor in the old residence pointed, the architect found the mother after 7 hours.

“Language difference, but the feeling of happiness is what I see clearly on the face of the insider, after 24 years of separation,” he said.

But there are also reunions that make him nostalgic. Phuc remembers the request of a girl living in France to find her parents in Ho Chi Minh City, last April. In 2018, this person returned to Vietnam to find his family but to no avail. Introduced by friends, she asked Phuc for support. “It was not difficult for me to find and reunite their family. But the mother passed away in a traffic accident in 2016. If only they could find and meet each other sooner,” he mused. “I didn’t get to see my mother, but I’m glad I found my family,” the girl told her benefactor.

After three years, Hong Phuc successfully connected 20 families. Some proposals to find people from 1975 sent, but he said it was difficult because the address was not clear, the people who knew and related had moved or died. “I don’t regret the effort, I’m afraid of suffering, I’m just afraid of not being able to find and tell the good news to my expatriates,” Phuc said.

As one of 20 lucky families that Phuc helped reunite with her son in France, Mrs. Pham Thi Ngoc Hue, 54 years old, from Hamlet 6, My Thanh Dong Commune, Long An cannot forget the first day of March 2021 when A strange man came to the house and asked about his lost son in 1996. “At first I didn’t believe it, because I was afraid that a bad person would deceive me. But when he showed his son’s picture, then he showed the information. Personally, I’m stunned. The guilt of losing my baby when I was just born is somewhat relieved,” said Ms. Hue.

After the reunion, the 54-year-old woman and her son still keep in touch, but have not met face-to-face because of the epidemic. “Thanks to Uncle Phuc, my mother and I had the opportunity to recognize each other,” Mrs. Hue choked.

Mr. Pham Van Duoc, 53 years old, head of Hamlet 6, My Thanh Dong commune, said this was the first time seeing an unknown person from another locality actively helping families in the hamlet find their lost child. “She was young but very enthusiastic, working with her heart. After contacting, she actively cooperated with us to find Mrs. Hue’s house, but if it were someone else, she would have given up,” Mr. Duoc said.

In addition to praise, many people think that Phuc is crazy and likes to do things, others think that he received a lot of money to thank him for enthusiastically helping. “But I don’t accept money or thank you gifts from anyone. The only thing I receive is joy and happiness when I see the bond of friendship connected after many years of separation,” Phuc affirmed.

Along with the work of helping families reunite, Hong Phuc hopes to receive more support from the authorities in the future in finding information about the families.

“Many documents sent back include identity cards of parents, household registration books and birth certificates of the lost, but I can’t find them because they moved. But if I get help from the authorities, I can’t find them. It will be easier to find the address. As long as I have the right information, I will find it myself, hoping that many families can be reunited,” Phuc confided.